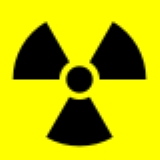 Overview
Radioactive contamination, also called radiological contamination, is radioactive
Radioactive decay
Radioactive decay is the process by which an atomic nucleus of an unstable atom loses energy by emitting ionizing particles . The emission is spontaneous, in that the atom decays without any physical interaction with another particle from outside the atom...
substances on surfaces, or within solids, liquids or gases (including the human body), where their presence is unintended or undesirable, or the process giving rise to their presence in such places. Also used less formally to refer to a quantity, namely the activity on a surface (or on a unit area of a surface).

As with other contamination
Contamination
Contamination is the presence of a minor and unwanted constituent in material, physical body, natural environment, at a workplace, etc.-Specifics:"Contamination" also has more specific meanings in science:...
, radioactive contamination refers only to the presence of the unintended or undesired radioactivity, and gives no indication of the magnitude of hazard involved.
Radioactive contamination is typically the result of a spill or accident during the production or use of radionuclide
Radionuclide
A radionuclide is an atom with an unstable nucleus, which is a nucleus characterized by excess energy available to be imparted either to a newly created radiation particle within the nucleus or to an atomic electron. The radionuclide, in this process, undergoes radioactive decay, and emits gamma...
s (radioisotopes), an unstable nucleus which has excessive energy.

DECONTAMINATION OF RADIO ACTIVE WATER? I am preparing plans for a safe room. The room is under the main slab foundation of my home. The concr...

Hi i want to ask how does radioactive waste effect the people and the envirmont because i am doing this project in school for that topic. Reply ASAP. ...
More

Hi I was wondering if there is any crystal, element or substance which visibly changes in the presence of radiation, either changing colour or giving ...
More
x