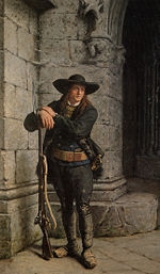 Encyclopedia
The Chouannerie was a royalist
House of Bourbon
The House of Bourbon is a European royal house, a branch of the Capetian dynasty . Bourbon kings first ruled Navarre and France in the 16th century. By the 18th century, members of the Bourbon dynasty also held thrones in Spain, Naples, Sicily, and Parma...
uprising in twelve of the western departements of France, particularly in the provinces of Brittany
Brittany
Brittany is a cultural and administrative region in the north-west of France. Previously a kingdom and then a duchy, Brittany was united to the Kingdom of France in 1532 as a province. Brittany has also been referred to as Less, Lesser or Little Britain...
and Maine
Maine (province)
Le Maine is one of the traditional provinces of France . It corresponds to the old county of Maine, with its center, the city of Le Mans.-Location:...
, against the French Revolution
French Revolution
The French Revolution , sometimes distinguished as the 'Great French Revolution' , was a period of radical social and political upheaval in France and Europe. The absolute monarchy that had ruled France for centuries collapsed in three years...
, the First French Republic, and even, with its headquarters in London
London
London is the capital city of :England and the :United Kingdom, the largest metropolitan area in the United Kingdom, and the largest urban zone in the European Union by most measures. Located on the River Thames, London has been a major settlement for two millennia, its history going back to its...
rather than France, for a time, under the Empire
First French Empire
The First French Empire , also known as the Greater French Empire or Napoleonic Empire, was the empire of Napoleon I of France...
. It played out in three phases and lasted from the spring of 1794 until 1800.

Its members, known as Chouan
Chouan
Chouan is a French surname. It was used as a nom de guerre by the Chouan brothers, most notably Jean Cottereau, better known as Jean Chouan, who led a major revolt in Bas-Maine against the French Revolution...
s, were motivated by their opposition to conscription and their support of the Catholic Church. They engaged in what would later be called guerrilla warfare. One of their leaders was Charles Armand Tuffin, marquis de la Rouerie
Charles Armand Tuffin, marquis de la Rouerie
Charles Armand Tuffin, marquis de la Rouërie , also known in the United States as "Colonel Armand", was a Breton cavalry officer who served under the American flag during the American War of Independence. He was promoted to brigadier general after the Battle of Yorktown...
, and another was the namesake of the insurrection, Jean Chouan
Jean Chouan
Jean Chouan was the nom de guerre of the Frenchman, Jean Cottereau, who was born at Saint-Berthevin, near Laval, in the department of Mayenne on 30 October 1757 and died 18 July 1794 at Olivet, also in Mayenne...
.

From 1791, the rejection of the Civil Constitution of the Clergy
Civil Constitution of the Clergy
The Civil Constitution of the Clergy was a law passed on 12 July 1790 during the French Revolution, that subordinated the Roman Catholic Church in France to the French government....
caused the peasants around Vannes
Vannes
Vannes is a commune in the Morbihan department in Brittany in north-western France. It was founded over 2000 years ago.-Geography:Vannes is located on the Gulf of Morbihan at the mouth of two rivers, the Marle and the Vincin. It is around 100 km northwest of Nantes and 450 km south west...
to rise in defence of their bishop against the patriots of Lorient
Lorient
Lorient, or L'Orient, is a commune and a seaport in the Morbihan department in Brittany in north-western France.-History:At the beginning of the 17th century, merchants who were trading with India had established warehouses in Port-Louis...
who wished to impose the oath on him. The following spring, in the area around Quimper, a justice of the peace led several parishes in a rising in the king's name against the local authorities.

In the Vendee, the nobility couldn't play their normal military role; there was never any properly organised army; it consisted mostly of small elusive bands. The Chouan leaders were above all, peasant farmers.

Differently from the earlier War in the Vendee of 1793, the Chouannerie didn't possess any territory, the cities and many towns having remained republican, but some districts did carry out open revolt. There was also the Petite Vendée in lower Maine
Maine
Maine is a state in the New England region of the northeastern United States, bordered by the Atlantic Ocean to the east and south, New Hampshire to the west, and the Canadian provinces of Quebec to the northwest and New Brunswick to the northeast. Maine is both the northernmost and easternmost...
, controlled by the Prince of Talmont. The Chouannerie was very difficult to suppress as its fighting forces hadn't been decimated in the battles of the Vendee war, its leaders were many in number and its army units were small and dispersed.

This rebellion is featured in the novel Les Chouans
Les Chouans
Les Chouans is an 1829 novel by French novelist and playwright Honoré de Balzac and included in the Scènes de la vie militaire section of his novel sequence La Comédie humaine. Set in the French region of Brittany, the novel combines military history with a love story between the aristocratic...
by Honoré de Balzac
Honoré de Balzac
Honoré de Balzac was a French novelist and playwright. His magnum opus was a sequence of short stories and novels collectively entitled La Comédie humaine, which presents a panorama of French life in the years after the 1815 fall of Napoleon....
and The Man in Grey
The Man in Grey (novel)
The Man in Grey by Baroness Orczy, author of The Scarlet Pimpernel, was first published in 1918. This time Orczy sets the action in post-revolutionary France....
, a collection of short stories about the Chouans by Baroness Orczy
Baroness Orczy
Baroness Emma Magdolna Rozália Mária Jozefa Borbála "Emmuska" Orczy de Orczi was a British novelist, playwright and artist of Hungarian noble origin. She was most notable for her series of novels featuring the Scarlet Pimpernel...
.

It is also depicted in paintings and popular imagery.