Encyclopedia
Queen Alia International Airport ' onMouseout='HidePop("48295")' href="/topics/Arabic_transliteration">transliterated
Arabic transliteration
Different approaches and methods for the romanization of Arabic exist. They vary in the way that they address the inherent problems of rendering written and spoken Arabic in the Latin alphabet; they also use different symbols for Arabic phonemes that do not exist in English or other European...
: Matar al-Malikah 'Alya' ad-Dowaly) is Jordan
Jordan
Jordan , officially the Hashemite Kingdom of Jordan , Al-Mamlaka al-Urduniyya al-Hashemiyya) is a kingdom on the East Bank of the River Jordan. The country borders Saudi Arabia to the east and south-east, Iraq to the north-east, Syria to the north and the West Bank and Israel to the west, sharing...
's largest airport
Airport
An airport is a location where aircraft such as fixed-wing aircraft, helicopters, and blimps take off and land. Aircraft may be stored or maintained at an airport...
that is situated in Zizya (زيزياء) area, 20 miles (32 km) south of Amman
Amman
Amman is the capital of Jordan. It is the country's political, cultural and commercial centre and one of the oldest continuously inhabited cities in the world. The Greater Amman area has a population of 2,842,629 as of 2010. The population of Amman is expected to jump from 2.8 million to almost...
. The airport has three terminals: two passenger terminals and one cargo terminal. It is the home hub of Royal Jordanian Airlines, the national flag carrier, as well as being a major hub for Jazeera Airways
Jazeera Airways
Jazeera Airways K.S.C is a low-fare airline with its head office on the grounds of Kuwait International Airport in Al Farwaniyah Governorate, Kuwait. It operates scheduled services to the Middle East and Europe. Its main base is Kuwait International Airport...
and Jordan Aviation
Jordan Aviation
Jordan Aviation is an airline based in Amman, Jordan. It operates scheduled and worldwide charter services flights, mainly to the Middle East, Europe and Africa. It also provides wet lease services to major airlines seeking additional capacity. Its main bases are Marka Airport, Amman and Aqaba...
. It was built in 1983.

The airport is named after Queen Alia, the third wife of King Hussein of Jordan
Hussein of Jordan
Hussein bin Talal was the third King of Jordan from the abdication of his father, King Talal, in 1952, until his death. Hussein's rule extended through the Cold War and four decades of Arab-Israeli conflict...
.
It is to be built a new terminal at the airport to increase the passenger capacity to 13 million passengers per year. The terminal will be completed in Spring 2012. 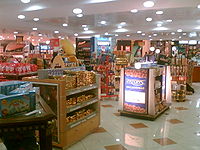 The airport has two lounges as of January 2010, one belonging to Royal Jordanian while the other is operated by the Four Seasons
Four Seasons Hotels and Resorts
Four Seasons Hotels, Inc. is a Canadian-based international ultra-luxury, five-star hotel management company. Travel + Leisure magazine and Zagat Survey rank the hotel chain's 84 properties among the top luxury hotels worldwide...
hotel chain http://www.aig.aero/node/338.

The Four Seasons lounge is located downstairs in Terminal 1 of the airport.

Buses and taxis serve the airport all day, with buses operating every half hour to Amman. A new rail line is being constructed that will link Queen Alia International Airport with Central and Downtown Amman.

The future expansion of the airport reached financial close on 15 November 2007. The project is a $675M BOT basis transaction involving a 25 year contract for Rehabilitation, Expansion and Operation Agreement (“REOA” or “Concession” Agreement). Under the terms of the REOA with the Government, the Investor (AIG) is responsible for the rehabilitation of the existing terminal, development of a new $600M terminal designed by internationally renowned Foster + Partners. The EPC Contractor is J & P (O) Limited.

The airport expansion plan was part of a drive to make Jordan a regional hub and once it is completed, Queen Alia International Airport should be able to handle around thirteen million passengers a year, nearly three times as many as its current capacity. The airport development plan is currently studied by ADPI (Aéroports de Paris
Aéroports de Paris
Aéroports de Paris or ADP is the airport authority that owns and manages the fourteen civil airports and airfields in the Île-de-France area. Among its notable airports are Charles de Gaulle International Airport, Orly Airport and Le Bourget Airport...
).

On 3 May 2003, Hiroki Gomi, a photographer for a leading Japan
Japan
Japan is an island nation in East Asia. Located in the Pacific Ocean, it lies to the east of the Sea of Japan, China, North Korea, South Korea and Russia, stretching from the Sea of Okhotsk in the north to the East China Sea and Taiwan in the south...
ese newspaper Mainichi Shimbun
Mainichi Shimbun
The is one of the major newspapers in Japan, published by .-History:The history of the Mainichi Shimbun begins with founding of two papers during the Meiji period. The Tokyo Nichi Nichi Shimbun was founded first, in 1872. The Mainichi claims that it is the oldest existing Japanese daily newspaper...
, was carrying an object, reportedly a battle souvenir from Iraq
Iraq
Iraq ; officially the Republic of Iraq is a country in Western Asia spanning most of the northwestern end of the Zagros mountain range, the eastern part of the Syrian Desert and the northern part of the Arabian Desert....
, when the object exploded as it was being inspected. The device killed the security guard inspecting it, and injured Gomi, who was standing nearby.

According to Paul William Roberts (in THE WAR AGAINST TRUTH, Raincoast Books, Vancouver 2004) Gomi had picked up two examples of what appeared to be a child's toy and what he thought had been dropped by US or British forces as part of a "winning hearts and minds" program. He gave one to his cab driver on the way to the airport.

Immediately after the device in Gomi's possession exploded, he screamed hysterically in Japanese. When a translator was found, it was learned that the cab driver had the other "toy". The cab driver was located and his "toy" had not exploded.

Gomi was detained, but rather than being put on trial, Gomi was pardoned in 2006 by the King of Jordan.

Roberts, a classical scholar and journalist for Harper's Magazine in the USA, believes that the story was hushed up in order to conceal a serious war crime on the part of the USA or Britain: the deliberate targeting of civilians using cluster bombs designed as children's toys.