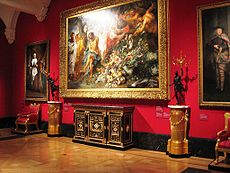 The Queen's Gallery is a public art gallery
Art gallery
An art gallery or art museum is a building or space for the exhibition of art, usually visual art.Museums can be public or private, but what distinguishes a museum is the ownership of a collection...
located at Buckingham Palace
Buckingham Palace
Buckingham Palace, in London, is the principal residence and office of the British monarch. Located in the City of Westminster, the palace is a setting for state occasions and royal hospitality...
, home of the British monarch
British monarchy
The monarchy of the United Kingdom is the constitutional monarchy of the United Kingdom and its overseas territories. The present monarch, Queen Elizabeth II, has reigned since 6 February 1952. She and her immediate family undertake various official, ceremonial and representational duties...
, in London
London
London is the capital city of :England and the :United Kingdom, the largest metropolitan area in the United Kingdom, and the largest urban zone in the European Union by most measures. Located on the River Thames, London has been a major settlement for two millennia, its history going back to its...
. It exhibits works of art from the Royal Collection (i.e. those works owned by the Queen "in trust for the nation" rather than privately) on a rotating basis; about 450 works are on display at any one time.

The gallery is located at the west front of the Palace, on the site of a chapel bombed during the Second World War, and first opened in 1962. Over the following 37 years it received some 5 million visitors, until it was closed in 1999 for extension work carried out by John Simpson
John Simpson (architect)
John Simpson CVO BSC ARCH DIP RIBA is a British architect.Simpson studied architecture at University College London. He is principal of practice at John Simpsons and Partners. Chartered Architects and Urban Designers, London...
. In 2002 the work was complete, and on May 21 the Gallery was reopened by the Queen to coincide with her Golden Jubilee
Golden Jubilee of Elizabeth II
The Golden Jubilee of Queen Elizabeth II was the international celebration marking the 50th anniversary of the accession of Elizabeth II to the thrones of seven countries, upon the death of her father, George VI, on 6 February 1952, and was intended by the Queen to be both a commemoration of her 50...
. The extension added the current Doric
Doric order
The Doric order was one of the three orders or organizational systems of ancient Greek or classical architecture; the other two canonical orders were the Ionic and the Corinthian.-History:...
entrance portico
Portico
A portico is a porch leading to the entrance of a building, or extended as a colonnade, with a roof structure over a walkway, supported by columns or enclosed by walls...
and several new rooms, more than tripling the size of the building. It is open to the public on a daily basis.