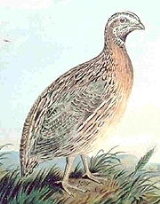 Encyclopedia
Quail is a collective name for several genera
Genera
Genera is a commercial operating system and development environment for Lisp machines developed by Symbolics. It is essentially a fork of an earlier operating system originating on the MIT AI Lab's Lisp machines which Symbolics had used in common with LMI and Texas Instruments...
of mid-sized bird
Bird
Birds are feathered, winged, bipedal, endothermic , egg-laying, vertebrate animals. Around 10,000 living species and 188 families makes them the most speciose class of tetrapod vertebrates. They inhabit ecosystems across the globe, from the Arctic to the Antarctic. Extant birds range in size from...
s generally considered in the order Galliformes
Galliformes
Galliformes are an order of heavy-bodied ground-feeding domestic or game bird, containing turkey, grouse, chicken, New and Old World Quail, ptarmigan, partridge, pheasant, and the Cracidae. Common names are gamefowl or gamebirds, landfowl, gallinaceous birds or galliforms...
. Old World quail
Old World quail
Old World quail is a collective name for several genera of mid-sized birds in the pheasant family Phasianidae. New World quail are also found in the Galliformes, but are not in the same family . Buttonquails are not closely related at all, but are named for their similar appearance...
are found in the family Phasianidae
Phasianidae
The Phasianidae is a family of birds which consists of the pheasants and partridges, including the junglefowl , Old World Quail, francolins, monals and peafowl. The family is a large one, and is occasionally broken up into two subfamilies, the Phasianinae, and the Perdicinae...
, while New World quail
New World quail
The New World quails or Odontophorids are small birds only distantly related to the Old World Quails, but named for their similar appearance and habits. The American species are in their own family Odontophoridae, whereas Old World Quail are in the pheasant family Phasianidae...
are found in the family Odontophoridae. The buttonquail
Buttonquail
Buttonquail or hemipodes are members of a small family of birds, Turnicidae, which resemble, but are unrelated to, the quails of Phasianidae. They inhabit warm grasslands in Asia, Africa, Europe, and Australia...
are not quail at all, are named more for their appearance superficially resembling quail, and are members of the Turnicidae family, more closely related to the Charadriiformes
Charadriiformes
Charadriiformes is a diverse order of small to medium-large birds. It includes about 350 species and has members in all parts of the world. Most Charadriiformes live near water and eat invertebrates or other small animals; however, some are pelagic , some occupy deserts and a few are found in thick...
. The King Quail, a member of the Old World quail, is often sold in the pet trade and is commonly referred to there as a "button quail". Many of the common larger species are farm raised for table food
Quails in cookery
Both Old World and New World quail include edible game species. The Common Quail was previously much favoured in French cooking, but quail for the table are now more likely to be domesticated Japanese Quail. The Common Quail is also part of Maltese cuisine and Portuguese cuisine, as well as in...
or egg consumption
Quail eggs
Quail eggs are considered a delicacy in many countries, including western Europe and North America. In Japanese cuisine, they are sometimes used raw or cooked as tamago in sushi and often found in bento lunches....
, and are hunted
Hunting
Hunting is the practice of pursuing any living thing, usually wildlife, for food, recreation, or trade. In present-day use, the term refers to lawful hunting, as distinguished from poaching, which is the killing, trapping or capture of the hunted species contrary to applicable law...
on game farms or in the wild, where they are sometimes artificially stocked to supplement the wild population, or extend into areas they are normally not found naturally.

The collective noun for a group of quail is a covey.

New World quail may refer to the following species of Odontophoridae: