Give me full information about mechanism of alqassam rockets
More

The Qassam gained notoriety as the best-known type of rocket deployed by Palestinian militants against Israeli civilian and military targets during the Second Intifada of the Israeli–Palestinian conflict
Israeli–Palestinian conflict
The Israeli–Palestinian conflict is the ongoing conflict between Israelis and Palestinians. The conflict is wide-ranging, and the term is also used in reference to the earlier phases of the same conflict, between Jewish and Zionist yishuv and the Arab population living in Palestine under Ottoman or...
. Since 2000, Palestinian rockets have claimed the lives of 22 Israelis and one Thai
Thai people
The Thai people, or Siamese, are the main ethnic group of Thailand and are part of the larger Tai ethnolinguistic peoples found in Thailand and adjacent countries in Southeast Asia as well as southern China. Their language is the Thai language, which is classified as part of the Kradai family of...
national.

The production of Qassams began in September 2001 following the outbreak of the Second Intifada. The first Qassam to be launched was the Qassam-1, fired on October 2001, with a maximum range of 3 kilometres (1.9 mi) to 4.5 kilometres (2.8 mi). February 10, 2002 was the first time Palestinians launched rockets into Israel, rather than at Israeli settlement
Israeli settlement
An Israeli settlement is a Jewish civilian community built on land that was captured by Israel from Jordan, Egypt, and Syria during the 1967 Six-Day War and is considered occupied territory by the international community. Such settlements currently exist in the West Bank...
s in the Gaza Strip. One of the rockets landed in Kibbutz Saad
Sa'ad
Sa'ad is a religious kibbutz in the Negev desert in southern Israel. Located near the Gaza strip, and the cities of Sderot and Netivot, it falls under the jurisdiction of Sdot Negev Regional Council. In 2006 it had a population of 599.-History:...
. A Qassam first hit an Israeli city on March 5, 2002 when two rockets struck the southern city of Sderot
Sderot
Sderot is a western Negev city in the Southern District of Israel. According to the Israel Central Bureau of Statistics , at the end of 2009 the city had a total population of 20,700. The city has been an ongoing target of Qassam rocket attacks from the Gaza Strip...
. Some rockets have hit as far as the edge of Ashkelon
Ashkelon
Ashkelon is a coastal city in the South District of Israel on the Mediterranean coast, south of Tel Aviv, and north of the border with the Gaza Strip. The ancient seaport of Ashkelon dates back to the Neolithic Age...
. By the end of December 2008, a total of 15 people had been killed by Palestinian rockets since attacks began in 2001. 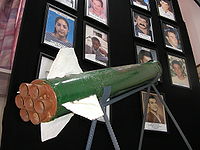 The introduction of the Qassam rocket took Israeli politicians and military experts by surprise, and reactions have been mixed. In 2006, the Israeli Ministry of Defense
Ministry of Defense (Israel)
The Ministry of Defence of the government of Israel, is the governmental department responsible for defending the State of Israel from internal and external military threats...
viewed the Qassams as "more a psychological than physical threat." The Israel Defence Force has reacted to the deployment of the Qassam rockets by deploying the Red Color early warning system in Sderot, Ashkelon and other at-risk targets. The system consists of an advanced radar that detects rockets as they are being launched, and loudspeakers warn civilians to take cover between 15 and 45 seconds before impact in an attempt to minimize the threat posed by the rockets. A system called Iron Dome
Iron Dome
Iron Dome is a mobile air defense system in development by Rafael Advanced Defense Systems designed to intercept short-range rockets and artillery shells. The system was created as a defensive countermeasure to the rocket threat against Israel's civilian population on its northern and southern...
, designed to intercept the rockets before they can hit their targets, is in use since March 2011.

The firing of Qassam rockets from the Gaza Strip
Gaza Strip
thumb|Gaza city skylineThe Gaza Strip lies on the Eastern coast of the Mediterranean Sea. The Strip borders Egypt on the southwest and Israel on the south, east and north. It is about long, and between 6 and 12 kilometres wide, with a total area of...
into Israel
Israel
The State of Israel is a parliamentary republic located in the Middle East, along the eastern shore of the Mediterranean Sea...
has been opposed by those living closest to the firing location due to Israeli military responses. On July 23, 2004 a family attempted to physically prevent the Al-Aqsa Martyrs' Brigades
Al-Aqsa Martyrs' Brigades
The al-Aqsa Martyrs' Brigades is a coalition of Palestinian nationalist militias in the West Bank. The group's name refers to the al-Aqsa Mosque in Jerusalem...
from setting up a Qassam rocket launcher outside their house. Members of the brigade shot one member of the family, an Arab boy, and wounded 5 others. In October 2010 five children and three women were injured after a Qassam rocket training site exploded near a crowded residential area of Tel As-Sultan in Rafah
Rafah
Rafah , also known as Rafiah, is a Palestinian city in the southern Gaza Strip. Located south of Gaza, Rafah's population of 71,003 is overwhelmingly made up of Palestinian refugees. Rafah camp and Tall as-Sultan form separate localities. Rafah is the district capital of the Rafah Governorate...
. Palestinian Center for Human Rights has condemned Hamas for storing explosive material near civilians. In August a similar explosion wounded 58 and destroyed seven houses.

The aim of the Qassam rocket design appears to be ease and speed of manufacture, using common tools and components. To this end, the rockets are propelled by a solid mixture of sugar
Sugar
Sugar is a class of edible crystalline carbohydrates, mainly sucrose, lactose, and fructose, characterized by a sweet flavor.Sucrose in its refined form primarily comes from sugar cane and sugar beet...
and potassium nitrate
Potassium nitrate
Potassium nitrate is a chemical compound with the formula KNO3. It is an ionic salt of potassium ions K+ and nitrate ions NO3−.It occurs as a mineral niter and is a natural solid source of nitrogen. Its common names include saltpetre , from medieval Latin sal petræ: "stone salt" or possibly "Salt...
, a widely available fertilizer. The warhead is filled with smuggled or scavenged TNT and urea nitrate
Urea nitrate
Urea nitrate is a fertilizer-based high explosive that has been used in improvised explosive devices in Israel, Iraq, and various other terrorism acts elsewhere in the world, like the 1993 World Trade Center bombings...
, another common fertilizer.

The rocket consists of a steel cylinder, containing a rectangular block of the propellant. A steel plate which forms and supports the nozzles is spot-welded
Spot welding
Spot welding is a process in which contacting metal surfaces are joined by the heat obtained from resistance to electric current flow. Work-pieces are held together under pressure exerted by electrodes. Typically the sheets are in the thickness range...
to the base of the cylinder. The warhead consists of a simple metal shell surrounding the explosives, and is triggered by a fuze
Fuze
Fuze Beverage, commercially referred to as just Fuze , is a manufacturer of teas and non-carbonated fruit drinks enriched with vitamins. Currently the brand consists of five vitamin-infused lines: Slenderize, Refresh, Tea, Defensify, and Vitalize...
constructed using a simple firearm cartridge
Cartridge (firearms)
A cartridge, also called a round, packages the bullet, gunpowder and primer into a single metallic case precisely made to fit the firing chamber of a firearm. The primer is a small charge of impact-sensitive chemical that may be located at the center of the case head or at its rim . Electrically...
, a spring
Spring (device)
A spring is an elastic object used to store mechanical energy. Springs are usually made out of spring steel. Small springs can be wound from pre-hardened stock, while larger ones are made from annealed steel and hardened after fabrication...
and a nail.

While early designs used a single nozzle which screwed into the base, recent rockets use a seven-nozzle design, with the nozzles drilled directly into the rocket baseplate. This change both increases the tolerance of the rocket to small nozzle design defects, and eases manufacture by allowing the use of a drill
Drill
A drill or drill motor is a tool fitted with a cutting tool attachment or driving tool attachment, usually a drill bit or driver bit, used for drilling holes in various materials or fastening various materials together with the use of fasteners. The attachment is gripped by a chuck at one end of...
rather than a lathe
Lathe
A lathe is a machine tool which rotates the workpiece on its axis to perform various operations such as cutting, sanding, knurling, drilling, or deformation with tools that are applied to the workpiece to create an object which has symmetry about an axis of rotation.Lathes are used in woodturning,...
during manufacture due to the smaller nozzle size. Unlike many other rockets, the nozzles are not canted, which means the rocket does not spin about its longitudinal axis during flight. While this results in a significant decrease in accuracy, it greatly simplifies rocket manufacture and the launch systems required.

The propellant of Palestinian rockets is generallly made from fertilizer, and the TNT warhead is smuggled through the Rafah border tunnels into the Gaza Strip. The cost for the raw materials of a large rocket is up to €500.

Other Palestinian militant groups have also developed home-made rockets. The media generally refer to all Palestinian high-trajectory rockets as "Qassam rockets" or "Qassam missiles", while they call most rockets fired from Lebanon "Katyushas", as a Katyusha is not a specific model but rather a generic class of rocket.

The Intelligence and Terrorism Information Center reports that the number of Palestinian rockets fired per year were: