Encyclopedia
The QF 3 pounder Hotchkiss was a light 47-mm naval gun introduced in 1886 to defend against new small fast vessels such as torpedo boats, and later submarines. It was also used ashore as a coast defence gun and later occasionally as an anti-aircraft gun. 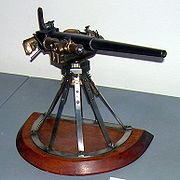 In 1886 this gun was the first of the modern QF artillery to be adopted by the Royal Navy
Royal Navy
The Royal Navy is the naval warfare service branch of the British Armed Forces. Founded in the 16th century, it is the oldest service branch and is known as the Senior Service...
as Ordnance QF 3 pounder Hotchkiss, built under licence by Elswick Ordnance Company.

By World War I
World War I
World War I , which was predominantly called the World War or the Great War from its occurrence until 1939, and the First World War or World War I thereafter, was a major war centred in Europe that began on 28 July 1914 and lasted until 11 November 1918...
the Hotchkiss gun was obsolete, and was gradually replaced in its class by the more powerful Ordnance QF 3 pounder Vickers
Ordnance QF 3 pounder Vickers
The Ordnance QF 3 pounder Vickers was a British artillery piece first tested in Britain in 1910. It was used on Royal Navy warships. It was more powerful than and unrelated to the older QF 3 pounder Hotchkiss, with a propellant charge approximately twice as large, but it initially fired the same...
gun. But many were brought back into service on merchant vessels used for auxiliary duties in World War II
World War II
World War II, or the Second World War , was a global conflict lasting from 1939 to 1945, involving most of the world's nations—including all of the great powers—eventually forming two opposing military alliances: the Allies and the Axis...
, or as subcalibre guns for gunnery practice until the 1950s. Early in WWII it was also pressed into service in ports around the British Empire to defend against possible incursions by motor torpedo boats, until the modern QF 6 pounder 10 cwt gun became available in numbers for that purpose. 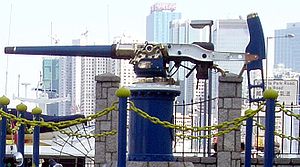