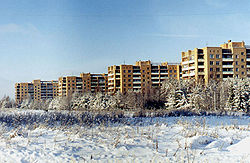 Pushchino is a town in Moscow Oblast
Moscow Oblast
Moscow Oblast , or Podmoskovye , is a federal subject of Russia . Its area, at , is relatively small compared to other federal subjects, but it is one of the most densely populated regions in the country and, with the 2010 population of 7,092,941, is the second most populous federal subject...
, Russia
Russia
Russia or , officially known as both Russia and the Russian Federation , is a country in northern Eurasia. It is a federal semi-presidential republic, comprising 83 federal subjects...
, situated 120 kilometres (74.6 mi) south of Moscow
Moscow
Moscow is the capital, the most populous city, and the most populous federal subject of Russia. The city is a major political, economic, cultural, scientific, religious, financial, educational, and transportation centre of Russia and the continent...
, on the right side of the Oka River
Oka River
Oka is a river in central Russia, the largest right tributary of the Volga. It flows through the regions of Oryol, Tula, Kaluga, Moscow, Ryazan, Vladimir, and Nizhny Novgorod and is navigable over a large part of its total length, as far upstream as to the town of Kaluga. Its length exceeds...
opposite the Prioksko-Terrasny Biosphere Reserve. As it can be confused with other towns with similar names, it is informally called Pushchino-on-Oka. Population:

Pushchino existed since the 16th century as a family estate after the land was awarded to the Pushchin family around the year 1500. The area was selected in 1956 as a site for a scientific research center for the Russian Academy of Science. It was incorporated as a city in 1966.

It is an academic research center focusing on microbiology
Microbiology
Microbiology is the study of microorganisms, which are defined as any microscopic organism that comprises either a single cell , cell clusters or no cell at all . This includes eukaryotes, such as fungi and protists, and prokaryotes...
, molecular biology
Molecular biology
Molecular biology is the branch of biology that deals with the molecular basis of biological activity. This field overlaps with other areas of biology and chemistry, particularly genetics and biochemistry...
and biophysics
Biophysics
Biophysics is an interdisciplinary science that uses the methods of physical science to study biological systems. Studies included under the branches of biophysics span all levels of biological organization, from the molecular scale to whole organisms and ecosystems...
.Research institutes comprising the scientific center include: