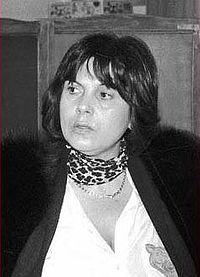 Assunta Maresca better known as known as Pupetta (Little Doll) was a former beauty queen who became a well-known figure in the Camorra
Camorra
The Camorra is a Mafia-type criminal organization, or secret society, originating in the region of Campania and its capital Naples in Italy. It is one of the oldest and largest criminal organizations in Italy, dating to the 18th century.-Background:...
. She made the international newspaper headlines in the mid-1950s when she killed the murderer of her husband in revenge. 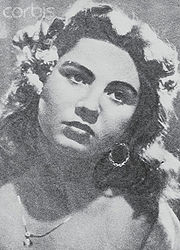 She was the daughter of Vincenzo Maresca, a Camorrista
Camorra
The Camorra is a Mafia-type criminal organization, or secret society, originating in the region of Campania and its capital Naples in Italy. It is one of the oldest and largest criminal organizations in Italy, dating to the 18th century.-Background:...
who controlled their hometown Castellamare di Stabia, south of Naples
Naples
Naples is a city in Southern Italy, situated on the country's west coast by the Gulf of Naples. Lying between two notable volcanic regions, Mount Vesuvius and the Phlegraean Fields, it is the capital of the region of Campania and of the province of Naples...
. The family was known as the Lampetielli, the lightning knives, for their expert use of switchblade
Switchblade
A switchblade is a type of knife with a folding or sliding blade contained in the handle which is opened automatically by a spring when a button, lever, or switch on the handle or bolster is activated A switchblade (also known as an automatic knife, pushbutton knife, switch, Sprenger, Springer,...
s and made their money in contraband cigarettes. She was the only girl in a family of four brothers. Tiny but pretty and spoilt, she was nicknamed Pupetta (Little Doll). At the age of 19, she won a beauty contest and became Miss Rovegliano, a suburban village of Naples.

She was courted by a wealthy and powerful local guappo
Guappo
Guappo is a word in Neapolitan dialect, meaning thug, bully, braggart, camorrista. It is often used to indicate a member of the Camorra, a Mafia-type organisation in the region of Campania and its capital Naples in Italy.-Etymology:...
, or Camorra boss, from Palma Campania
Palma Campania
Palma Campania, known until 1863 as Palma di Nola, is a comune in the Province of Naples in the Italian region Campania, located about 25 km east of Naples....
, Pasquale Simonetti, known as Pasquale 'e Nola, who worked in the fruit and vegetable market in Naples
Naples
Naples is a city in Southern Italy, situated on the country's west coast by the Gulf of Naples. Lying between two notable volcanic regions, Mount Vesuvius and the Phlegraean Fields, it is the capital of the region of Campania and of the province of Naples...
and dealt in smuggled goods. On April 27, 1955, they married.

Simonetti’s style and power bothered other Camorristi, and one day in 1955 he was shot by Gaetano Orlando, a hitman commissioned by his rival Antonio Esposito, another Camorrista. The six months pregnant Pupetta was devastated. She believed the police knew who the perpetrator was but were not prepared to do anything about it. On August 4, 1955, she drove to Naples with her younger brother, Ciro. When they met Esposito, she reached into her handbag and pulled out a Smith & Wesson .38
.38 Special
The .38 Smith & Wesson Special is a rimmed, centerfire cartridge designed by Smith & Wesson. It is most commonly used in revolvers, although some semi-automatic pistols and carbines also use this round...
. Holding it with both hands ("I was afraid I would miss," she explained later), she opened fire and killed Esposito in broad daylight.

On October 14, 1955, she was arrested. The trial started in April 1959 at the Court of Assizes in Naples. The killing and the following trial made international headlines. At the trial, she defiantly declared: "I would do it again!" and the whole courtroom burst into cheers.

One newspaper called her "The Diva of Crime" and for the first time in history the Court in Naples permitted microphones to be used so that the crowds could hear what was going on. Proposals of marriage flooded in and one musician was composing a song in Pupetta's honour called La legge d'onore – the Law of Honour. Nevertheless, she was sentenced to 18 years’ imprisonment, later reduced to 13 years and 4 months by the Court of Appeal.

Pupetta Maresca gave birth to her first child in prison. She was pardoned in 1965, but "Madame Camorra" as she was dubbed, continued to be involved in criminal activities. She became the lover of yet another Camorra boss, the drug baron Umberto Ammaturo
Umberto Ammaturo
Umberto Ammaturo is an Italian criminal and a member of the Neapolitan Camorra. He specialized in cocaine trafficking from South America. He was included in the list of most wanted fugitives in Italy until his capture in May 1993...
, and gave birth to twins. She supported his criminal business. In 1974, when her son was 18 he was abducted and murdered. His death remains a mystery, but she believes the assailant was Ammaturo – who denied knowing anything about his death.

Later in 1982, she was arrested with Ammaturo for the murder of forensic scientist Aldo Semerari
Aldo Semerari
Aldo Semerari was an Italian criminologist, psychiatrist and political diplomat of the Sovereign Military Order of Malta.-Background:...
, and extortion, crimes she still denies. However, Ammaturo who was initially accquited, later confessed to the murder after becoming a pentito
Pentito
Pentito designates people in Italy who, formerly part of criminal or terrorist organizations, following their arrests decide to "repent" and collaborate with the judicial system to help investigations...
on June 1993.Pupetta Maresca served four years in prison and now lives alone in Sorrento
Sorrento
Sorrento is the name of many cities and towns:*Sorrento, Italy*Sorrento, Florida, United States*Sorrento, Louisiana, United States*Sorrento, Maine, United States*Sorrento, Victoria, a township on the Mornington Peninsula, Victoria, Australia...
.

Pupetta Maresca’s life has been the subject of several films:

"Pascalone 'e Nola" Pupetta 50 anni dopo svende tutto a 10 euro, La Repubblica, August 2, 2005 Die Artischocken-Diktatur, Der Spiegel, May 27, 1959
The source of this article is wikipedia, the free encyclopedia.  The text of this article is licensed under the GFDL.