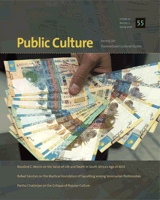 Encyclopedia
Public Culture is a reviewed interdisciplinary academic journal
Academic journal
An academic journal is a peer-reviewed periodical in which scholarship relating to a particular academic discipline is published. Academic journals serve as forums for the introduction and presentation for scrutiny of new research, and the critique of existing research...
of cultural studies
Cultural studies
Cultural studies is an academic field grounded in critical theory and literary criticism. It generally concerns the political nature of contemporary culture, as well as its historical foundations, conflicts, and defining traits. It is, to this extent, largely distinguished from cultural...
, founded in 1988 by anthropologists Carol Breckenridge
Carol Breckenridge
Carol A. Breckenridge was an American anthropologist and Associate Professor of History at the New School for Social Research, author of many books and articles on colonialism and the political economy of ritual; state, polity, and religion in South India; society and aesthetics in India since...
and Arjun Appadurai
Arjun Appadurai
Arjun Appadurai is a contemporary social-cultural anthropologist focusing on modernity and globalization, based in New York.Appadurai was born in Mumbai , India and educated in India before coming to the United States. He graduated from St...
. By its own account, the journal seeks to address “the cultural transformations associated with cities, media and consumption, and the cultural flows that draw cities, societies and states into larger transnational relationships and global political economies”. Among recent contributors are Charles Taylor
Charles Taylor
Charles McArthur Ghankay Taylor was the 22nd President of Liberia, serving from 2 August 1997 until his resignation on 11 August 2003....
, Asef Bayat, Dipesh Chakrabarty
Dipesh Chakrabarty
Dipesh Chakrabarty is a Bengali historian who has also made contributions to postcolonial theory and subaltern studies.He attended Presidency College of the University of Calcutta, where he received his undergraduate degree in physics. He also received a diploma in business management from the...
, George Chauncey
George Chauncey
George Chauncey is a professor of history at Yale University. He is best known as the author of Gay New York: Gender, Urban Culture, and the Making of the Gay Male World, 1890-1940 .-Life and works:...
, Jean Comaroff
Jean Comaroff
Jean Comaroff is Bernard E. & Ellen C. Sunny Distinguished Service Professor of Anthropology and of Social Sciences at the University of Chicago and Honorary Professor of Anthropology at the University of Cape Town. She is an expert on the effects of colonialism on people in Southern Africa.She...
, Achille Mbembe
Achille Mbembe
Achille Mbembe is a philosopher and political scientist. He was born in Cameroon in 1957. He obtained his Ph.D. in History at the University of Sorbonne in Paris, France, in 1989. He subsequently obtained a D.E.A. in Political Science at the Institut d’Etudes Politiques in the same city...
, and Michael Watts
Michael Watts
Michael J. Watts is "Class of 1963" Professor of Geography and Development Studies at the University of California, Berkeley, and a leading critical intellectual figure of the academic left. An intensively productive scholar, he works on a variety of themes from African development to contemporary...
.

Public Culture is currently edited at New York University
New York University
New York University is a private, nonsectarian research university based in New York City. NYU's main campus is situated in the Greenwich Village section of Manhattan...
and published for the Society for Transnational Cultural Studies by Duke University Press
Duke University Press
Duke University Press is an academic publisher of books and journals, and a unit of Duke University. It publishes approximately 120 books annually and more than 40 journals, as well as offering five electronic collections...
. Initially based at the University of Pennsylvania
University of Pennsylvania
The University of Pennsylvania is a private, Ivy League university located in Philadelphia, Pennsylvania, United States. Penn is the fourth-oldest institution of higher education in the United States,Penn is the fourth-oldest using the founding dates claimed by each institution...
and published independently, in 1992 the journal moved to the University of Chicago
University of Chicago
The University of Chicago is a private research university in Chicago, Illinois, USA. It was founded by the American Baptist Education Society with a donation from oil magnate and philanthropist John D. Rockefeller and incorporated in 1890...
, first under the editorship of Carol Breckenridge, later under Elizabeth Povinelli
Elizabeth Povinelli
Elizabeth A. Povinelli is Professor of Anthropology and Gender Studies at Columbia University where she has also been the Director of the Institute for Research on Women and Gender and the Co-Director of the Centre for the Study of Law and Culture...
. In 2004, the journal moved from Chicago to New York to accompany its editor, Claudio Lomnitz
Claudio Lomnitz
Claudio Lomnitz is the William H. Ransford Professor of Anthropology at Columbia University. Prior to teaching at Columbia, Lomnitz was a Distinguished University Professor of Anthropology and Chair of the Committee on Historical Studies at the New School University, one of three professors in the...
, based first at The New School
The New School
The New School is a university in New York City, located mostly in Greenwich Village. From its founding in 1919 by progressive New York academics, and for most of its history, the university was known as the New School for Social Research. Between 1997 and 2005 it was known as New School University...
and from 2006, at Columbia. More recently in 2010, the journal moved to New York University under new editorial leadership. Under Lomnitz and Executive Editor Dilip Parameshwar Gaonkar
Dilip Parameshwar Gaonkar
Dilip Parameshwar Gaonkar is an Associate Professor in Rhetoric and Public Culture and the Director of Center for Global Culture and Communication at Northwestern University. He is also the Director of Center for Transcultural Studies, an independent scholarly research network concerned with...
, Public Culture underwent a complete redesign and implemented three new regular sections: “Doxa at Large,” a space for shorter opinion pieces on recent events; “Arts in Circulation,” featuring reflections on innovative cultural work and on the work of art in public; and “Sites of Knowledge,” focusing on institutions that have made a significant mark on a world region.

In 2010, the journal welcomed a new editor, Eric Klinenberg
Eric Klinenberg
Eric Klinenberg is an American sociologist and a scholar of urban studies, culture, and media. He is best known for his contributions as a public sociologist....
, a professor of Sociology at New York University, and his new editorial committee consisting of senior editors, Andrew Lakoff, Fred Turner
Fred Turner (academic)
Fred Turner is an Assistant Professor at Stanford University in the Department of Communication and the acclaimed author of two books:* From Counterculture to Cyberculture: Stewart Brand, the Whole Earth Network and the Rise of Digital Utopianism...
, and Caitlin Zaloom, and the following editorial committee members: Craig Calhoun
Craig Calhoun
Craig Calhoun is an American sociologist and an advocate of using social science to address issues of public concern. He is president of the Social Science Research Council, University Professor of the Social Sciences at New York University and Director of NYU's...
, NYU; Nadia Abu El-Haj, Barnard; Manu Goswami, NYU; Greg Grandin
Greg Grandin
Greg Grandin is an American historian, and professor of history at New York University. He is author of a number of books, including Fordlândia: The Rise and Fall of Henry Ford’s Forgotten Jungle City, which was a finalist for the Pulitzer Prize for History, as well as for the National Book Award...
, NYU; Bruce Grant, NYU; John Jackson, University of Pennsylvania; Johan Lindquist, Stockholm University; Eyal Press, New America Foundation/NYU; Erica Robles, NYU; Ananya Roy
Ananya Roy
Ananya Roy is a professor in the Department of City and Regional Planning at the University of California, Berkeley, where she teaches in the fields of urban studies and international development...
, UC Berkeley; Marita Sturken
Marita Sturken
Marita Sturken is a scholar, author, professor, and critic.Marita Sturken is Professor and Chair of the Department of Media, Culture, and Communication at New York University's Steinhardt School of Culture, Education, and Human Development, where she teaches courses on cultural studies, visual...
, NYU; and Guobin Yang, Barnard.

The journal has received recognition from several sources, including an award for Best Journal Design from the 2007 Council of Editors of Learned Journals Awards and a favorable review in the Times Literary Supplement.