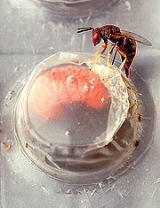 Encyclopedia
Pteromalidae is a very large family of parasitic wasp
Parasitic wasp
The term parasitoid wasp refers to a large evolutionary grade of hymenopteran superfamilies, mainly in the Apocrita. They are primarily parasitoids of other animals, mostly other arthropods...
s, with some 3,450 described species in some 640 genera (the number used to be greater, but many species and genera have been reduced to synonymy in recent years). The subfamily-level divisions of the family are highly contentious and unstable, and there is no question that the family is completely artificial, composed of numerous distantly-related groups (polyphyletic). Accordingly, details of the life history range over nearly the entire range possible within the Chalcidoidea, though the majority are (as with most Chalcidoids) parasitoid
Parasitoid
A parasitoid is an organism that spends a significant portion of its life history attached to or within a single host organism in a relationship that is in essence parasitic; unlike a true parasite, however, it ultimately sterilises or kills, and sometimes consumes, the host...
s of other insect
Insect
Insects are a class of living creatures within the arthropods that have a chitinous exoskeleton, a three-part body , three pairs of jointed legs, compound eyes, and two antennae...
s. They are found throughout the world in virtually all habitats, and many are important as biological control agents.

In essence, a "Pteromalid" is any member of the Chalcidoidea that has 5-segmented tarsi
Arthropod leg
The arthropod leg is a form of jointed appendage of arthropods, usually used for walking. Many of the terms used for arthropod leg segments are of Latin origin, and may be confused with terms for bones: coxa , trochanter , femur, tibia, tarsus, ischium, metatarsus, carpus, dactylus ,...
and does not have the defining features of any of the remaining families with 5-segmented tarsi. There is no question that this family will be divided into several families in the near future.