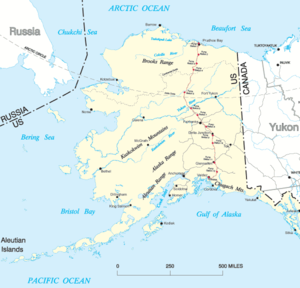 Prudhoe Bay or Sagavanirktok (icon) is a census-designated place
Census-designated place
A census-designated place is a concentration of population identified by the United States Census Bureau for statistical purposes. CDPs are delineated for each decennial census as the statistical counterparts of incorporated places such as cities, towns and villages...
(CDP) located in North Slope Borough
North Slope Borough, Alaska
-National protected areas:* Alaska Maritime National Wildlife Refuge ** Cape Lisburne** Cape Thompson* Arctic National Wildlife Refuge ** Mollie Beattie Wilderness * Gates of the Arctic National Park and Preserve...
in the U.S. state of Alaska
Alaska
Alaska is the largest state in the United States by area. It is situated in the northwest extremity of the North American continent, with Canada to the east, the Arctic Ocean to the north, and the Pacific Ocean to the west and south, with Russia further west across the Bering Strait...
. As of the 2010 census, the population of the CDP was 2,174 people; however, at any given time several thousand transient workers support the Prudhoe Bay oil field
Prudhoe Bay oil field
Prudhoe Bay Oil Field is a large oil field on Alaska's North Slope. It is the largest oil field in both the United States and in North America, covering and originally containing approximately of oil.. BP. August 2006...
. The airport, lodging, and general store
General store
A general store, general merchandise store, or village shop is a rural or small town store that carries a general line of merchandise. It carries a broad selection of merchandise, sometimes in a small space, where people from the town and surrounding rural areas come to purchase all their general...
are located at Deadhorse; the rigs and processing facilities are located on scattered gravel pads laid atop the tundra
Tundra
In physical geography, tundra is a biome where the tree growth is hindered by low temperatures and short growing seasons. The term tundra comes through Russian тундра from the Kildin Sami word tūndâr "uplands," "treeless mountain tract." There are three types of tundra: Arctic tundra, alpine...
. It is only during winter that the surface is hard enough to support heavy equipment and new construction happens at that time.

Prudhoe Bay is the unofficial northern terminus of the Pan-American Highway
Pan-American Highway
The Pan-American Highway is a network of roads measuring about in total length. Except for an rainforest break, called the Darién Gap, the road links the mainland nations of the Americas in a connected highway system. According to Guinness World Records, the Pan-American Highway is the world's...
. A few tourists, arriving by bus after a two-day ride up the Dalton Highway
Dalton Highway
The James W. Dalton Highway, usually Dalton Highway is a 414-mile road in Alaska. It begins at the Elliott Highway, north of Fairbanks, and ends at Deadhorse near the Arctic Ocean and the Prudhoe Bay oil fields...
from Fairbanks
Fairbanks, Alaska
Fairbanks is a home rule city in and the borough seat of the Fairbanks North Star Borough in the U.S. state of Alaska.Fairbanks is the largest city in the Interior region of Alaska, and second largest in the state behind Anchorage...
, come to see the tundra, the Arctic Ocean
Arctic Ocean
The Arctic Ocean, located in the Northern Hemisphere and mostly in the Arctic north polar region, is the smallest and shallowest of the world's five major oceanic divisions...
, and the midnight sun
Midnight sun
The midnight sun is a natural phenomenon occurring in summer months at latitudes north and nearby to the south of the Arctic Circle, and south and nearby to the north of the Antarctic Circle where the sun remains visible at the local midnight. Given fair weather, the sun is visible for a continuous...
, staying in lodgings assembled from modular building
Modular building
Modular buildings and modular homes are sectional prefabricated buildings or houses that consist of multiple modules or sections which are built in a remote facility and then delivered to their intended site of use...
s.

Prudhoe Bay is adjacent to the largest oil field in the United States.