Encyclopedia
Proof coinage means special early samples of a coin
Coin
A coin is a piece of hard material that is standardized in weight, is produced in large quantities in order to facilitate trade, and primarily can be used as a legal tender token for commerce in the designated country, region, or territory....
issue, historically made for checking the dies
Die (manufacturing)
A die is a specialized tool used in manufacturing industries to cut or shape material using a press. Like molds, dies are generally customized to the item they are used to create...
and for archival purposes, but nowadays often struck in greater numbers specially for coin collectors
Collecting
The hobby of collecting includes seeking, locating, acquiring, organizing, cataloging, displaying, storing, and maintaining whatever items are of interest to the individual collector. Some collectors are generalists, accumulating merchandise, or stamps from all countries of the world...
(numismatists). Many countries now issue them.

Preparation of a proof striking usually involved polishing
Polishing
Polishing is the process of creating a smooth and shiny surface by rubbing it or using a chemical action, leaving a surface with a significant specular reflection In some materials polishing is also able to reduce diffuse reflection to...
of the dies. They can usually be distinguished from normal circulation coins by their sharper rims
Rim (coin)
The rim of a coin is the sharp circular edge which surrounds the coin design.This is the part which exceeds the area of the die which strikes the coin during production, and as a result is pushed upward and sharpened to form a sort of border around the coin's design...
and design, as well as much smoother "fields" – the blank areas not part of the coin's design.

The dies for making modern proof coins are often treated with chemicals to make certain parts of the design take on a frost
Frost
Frost is the solid deposition of water vapor from saturated air. It is formed when solid surfaces are cooled to below the dew point of the adjacent air as well as below the freezing point of water. Frost crystals' size differ depending on time and water vapour available. Frost is also usually...
ed appearance, with the polished fields taking on a mirror finish. Several other methods have been used in the past to achieve this effect, including sand blasting the dies, and matte proofs. Proof coins of the early 19th century even appear to be scratched, but it was part of the production process.

Most proof coins are double struck. This does not normally result in doubling that is readily observable, but does result in the devices being struck fully. 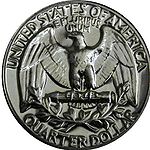 The U.S. had largely stopped striking proof coins in 1916, although a few later specimens exist. Beginning in 1936, the U.S. Mint began producing proof sets. Sets struck from 1936–42 (1942 offered a five-coin and a six-coin version, the latter included the Silver Wartime Nickel) and, when resumed, from 1950–72 include the cent, nickel, dime, quarter, and half dollar. From 1950 to 1955, proof sets were packaged in a box and each of the five coins was sealed in a cellophane bag. 1955 saw both the original "box" packaging and introduced the flat-pack, where the coins were sealed in cellophane and presented in an envelope. The flat-pack packaging continued through 1964, after which the coins were sealed in various styles of hard plasticized cases. (From 1965 to 1967, the production of proof sets was suspended and Special Mint Sets were made in their place. They were made at the San Francisco Assay Office but bore no "S" mintmark.) From 1973 through 1981 the dollar was also included, and also from 2000 on. Proof Susan B. Anthony dollar
Susan B. Anthony dollar
The Susan B. Anthony dollar is a United States coin minted from 1979 to 1981, and again in 1999. It depicts women's suffrage campaigner Susan B. Anthony on a dollar coin. It was the first circulating U.S. coin with the portrait of an actual woman rather than an allegorical female figure such as...
s were struck in 1999, but they were sold separately and not included in the proof sets in that year.

Other sets, called "Prestige Proof" sets, also contain selected commemorative coin
Commemorative coin
Commemorative coins are coins that were issued to commemorate some particular event or issue. Most world commemorative coins were issued from the 1960s onward, although there are numerous examples of commemorative coins of earlier date. Such coins have a distinct design with reference to the...
s. These sets were sold from 1983 to 1997 (except 1985) at an additional premium. As Legacy Proof sets, the practice was resumed from 2005 to 2008. Beginning in 1999, proof sets also contain five different Statehood Quarters. The 2004–05 series also contain the two Lewis and Clark nickels. Beginning in 2007, full proof sets include the four Presidential dollars for that year; proof sets of only Statehood quarters and Presidential dollars are also available. Proof sets issued in 2009 contain 18 coins – the most ever included – as that year marked the Lincoln Birth Bicentennial and featured four different reverses for the Lincoln Cent. These were struck in the original metal composition of Lincoln Cents: 95% Copper and 5% Tin & Zinc, which differs from the copper-plated zinc composition of circulating Lincoln Cents used since 1982. Also included were six Quarters (instead of five) which commemorated Washington, D.C. and the five U.S. Territories of Puerto Rico, Guam, American Samoa, The Northern Mariana Islands and The U.S. Virgin Islands. 2010 saw the introduction of the Lincoln Cent with new the Union Shield reverse which replaces the familiar Lincoln Memorial reverse used from 1959 to 2008. Also introduced for 2010 are the first five of the new America the Beautiful Quarters program, depicting different National Parks and Monuments, one from each State, Washington, D.C. and the 5 U.S. Territories.

The U.S. Mint has also released special proof sets, such as in 1976, when a proof set of 3 silver-clad coins: the Quarter-dollar, Half-dollar and Dollar coins depicting special reverses to commemorate the U.S. Bi-Centennial was issued. A proof "Coin & Chronicles" set was issued for 2009, which included one each of the 4 different Lincoln Cent designs and a commemorative Lincoln Silver Dollar, presented in special packaging.

Occasionally, there are errors which escape the Mint's inspection process, resulting in some very rare and expensive proof sets. This has happened at least seven times: 1968-S, 1970-S and 1975-S and in the 1983-S Prestige set, each with a dime that has no mint mark; a small number of 1971-S sets included a nickel without a mint mark; 1990-S saw both regular and Prestige sets which included a penny with no mint mark.

Not quite so rare (or expensive) are proof sets issued which vary from other sets issued in the same year. These include the 1960 and 1970-S sets, both of which are found in either a "small date" or "large date" variety, which refers to the size and position of the date on the Lincoln cent. 1979-S and 1981-S sets each come in either a "Type I" or a "Type II" version, where the S mint mark is either "filled" (also known as the "blob" mint mark) or "clear". 1964 has a design variation where the President's portrait on the Kennedy half-dollar has "accented hair". The design was modified early in the production (at the request of Jacqueline Kennedy) to mute the accenting of the hair to a more smooth appearance. This resulted in the "accented hair" variety being more rare and commanding a premium over the "regular" variety.

Since 1992 the mint has struck proof sets in both silver
Silver
Silver is a metallic chemical element with the chemical symbol Ag and atomic number 47. A soft, white, lustrous transition metal, it has the highest electrical conductivity of any element and the highest thermal conductivity of any metal...
and base metal. Also, "Silver Premier" sets, featuring deluxe packaging, were offered from 1992 to 1998. U.S. commemorative and bullion platinum, gold, and silver coins are also often issued in both uncirculated and proof types, sometimes with different mint mark
Mint mark
A mint mark is an inscription on a coin indicating the mint where the coin was produced.-History:Mint marks were first developed to locate a problem. If a coin was underweight, or overweight, the mint mark would immediately tell where the coin was minted, and the problem could be located and fixed...
s.

In most years since 1947 the U.S. mint has also produced "mint sets", and because of the terms used there is some confusion over the difference between these and proof sets. These are uncirculated coin
Uncirculated coin
The term uncirculated coin can refer to three things:* A coin that is released to the public but not intended for general circulation but is available through a mint or through a local coin dealer...
s that have been specially packaged, and (unless a scarce coin is included) are generally neither as expensive nor as valuable as proofs. (From 1965-67 the mint did not sell proof or uncirculated coins, but only a hybrid product, "special mint sets." None of these are particularly valuable.) Some U.S. mints also sell annual "souvenir sets" from their production runs. These are generally not of high collectable value, although the 1982-83 sets are in demand, since no "official" mint sets were issued during those years. Finally, individual dealers have made unofficial "year sets". The latter have no value beyond their individual coins. Members of the public should be careful to understand what products they are being offered.
The source of this article is wikipedia, the free encyclopedia.  The text of this article is licensed under the GFDL.