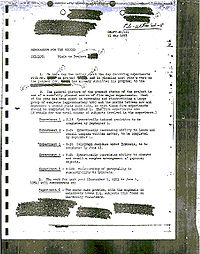 The project studied hypnosis
Hypnosis
Hypnosis is "a trance state characterized by extreme suggestibility, relaxation and heightened imagination."It is a mental state or imaginative role-enactment . It is usually induced by a procedure known as a hypnotic induction, which is commonly composed of a long series of preliminary...
, forced morphine
Morphine
Morphine is a potent opiate analgesic medication and is considered to be the prototypical opioid. It was first isolated in 1804 by Friedrich Sertürner, first distributed by same in 1817, and first commercially sold by Merck in 1827, which at the time was a single small chemists' shop. It was more...
addiction
Substance dependence
The section about substance dependence in the Diagnostic and Statistical Manual of Mental Disorders does not use the word addiction at all. It explains:...
(and subsequent forced withdrawal), and the use of other chemicals, among other methods, to produce amnesia and other vulnerable states in subjects.