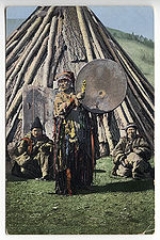 Overview
Hypnosis is "a trance state characterized by extreme suggestibility, relaxation and heightened imagination."
It is a mental state
Mental health
Mental health describes either a level of cognitive or emotional well-being or an absence of a mental disorder. From perspectives of the discipline of positive psychology or holism mental health may include an individual's ability to enjoy life and procure a balance between life activities and...
(according to "state theory
State theory
State theory is a theory of absolute time in which the number of states from the first moment in time up to the current moment in time can be counted. This is in contrast to Einstein's theory of relativity, in which time is modelled using the real number system. A state is a moment in time, a...
") or imaginative
Imagination
Imagination, also called the faculty of imagining, is the ability of forming mental images, sensations and concepts, in a moment when they are not perceived through sight, hearing or other senses...
role-enactment (according to "non-state theory"). It is usually induced by a procedure known as a hypnotic induction, which is commonly composed of a long series of preliminary instructions and suggestions. Hypnotic suggestions may be delivered by a hypnotist in the presence of the subject, or may be self-administered ("self-suggestion" or "autosuggestion").

Is prolonged hypnotic situation harmful to the human brain? As an example, a young female has been doctrinated to beleive in scientology (cult) thru ...
More
x