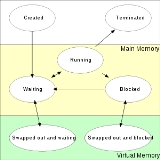 Encyclopedia
In a multitasking
Computer multitasking
In computing, multitasking is a method where multiple tasks, also known as processes, share common processing resources such as a CPU. In the case of a computer with a single CPU, only one task is said to be running at any point in time, meaning that the CPU is actively executing instructions for...
computer
Computer
A computer is a programmable machine designed to sequentially and automatically carry out a sequence of arithmetic or logical operations. The particular sequence of operations can be changed readily, allowing the computer to solve more than one kind of problem...
system, processes
Process (computing)
In computing, a process is an instance of a computer program that is being executed. It contains the program code and its current activity. Depending on the operating system , a process may be made up of multiple threads of execution that execute instructions concurrently.A computer program is a...
may occupy a variety of states
State (computer science)
In computer science and automata theory, a state is a unique configuration of information in a program or machine. It is a concept that occasionally extends into some forms of systems programming such as lexers and parsers....
. These distinct states may not actually be recognized as such by the operating system
Operating system
An operating system is a set of programs that manage computer hardware resources and provide common services for application software. The operating system is the most important type of system software in a computer system...
kernel, however they are a useful abstraction for the understanding of processes. 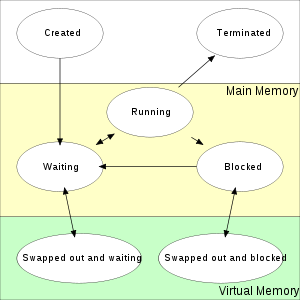 The following typical process states are possible on computer systems of all kinds. In most of these states, processes are "stored" on main memory.

(Also called New)
When a process is first created, it occupies the "created" or "new" state. In this state, the process awaits admission to the "ready" state. This admission will be approved or delayed by a long-term, or admission, scheduler
Scheduling (computing)
In computer science, a scheduling is the method by which threads, processes or data flows are given access to system resources . This is usually done to load balance a system effectively or achieve a target quality of service...
. Typically in most desktop computer
Desktop computer
A desktop computer is a personal computer in a form intended for regular use at a single location, as opposed to a mobile laptop or portable computer. Early desktop computers are designed to lay flat on the desk, while modern towers stand upright...
systems, this admission will be approved automatically, however for real-time operating system
Real-time operating system
A real-time operating system is an operating system intended to serve real-time application requests.A key characteristic of a RTOS is the level of its consistency concerning the amount of time it takes to accept and complete an application's task; the variability is jitter...
s this admission may be delayed. In a real time system, admitting too many processes to the "ready" state may lead to oversaturation and overcontention
Bus contention
Bus contention, in computer design, is an undesirable state of the bus in which more than one device on the bus attempts to place values on the bus at the same time. Most bus architectures require their devices follow an arbitration protocol carefully designed to make the likelihood of contention...
for the systems resources, leading to an inability to meet process deadlines.

(Also called waiting or runnable) A "ready" or "waiting" process has been loaded into main memory and is awaiting execution on a CPU (to be context switch
Context switch
A context switch is the computing process of storing and restoring the state of a CPU so that execution can be resumed from the same point at a later time. This enables multiple processes to share a single CPU. The context switch is an essential feature of a multitasking operating system...
ed onto the CPU by the dispatcher, or short-term scheduler). There may be many "ready" processes at any one point of the systems execution - for example, in a one processor system, only one process can be executing at any one time, and all other "concurrently executing" processes will be waiting for execution.

A ready queue or run queue
Run queue
In modern computers many processes run at once. Active processes are placed in an array called a run queue, or runqueue. The run queue may contain priority values for each process, which will be used by the scheduler to determine which process to run next...
is used in computer scheduling
Scheduling (computing)
In computer science, a scheduling is the method by which threads, processes or data flows are given access to system resources . This is usually done to load balance a system effectively or achieve a target quality of service...
. Modern computers are capable of running many different programs or processes at the same time. However, the CPU is only capable of handling one process at a time. Processes that are ready for the CPU are kept in a queue for "ready" processes. Other processes that are waiting for an event to occur, such as loading information from a hard drive or waiting on an internet connection, are not in the ready queue.

A process moves into the running state when it is chosen for execution. The process's instructions are executed by one of the CPUs (or cores) of the system. There is at most one running process per CPU or core.

A process that is blocked
Blocking (computing)
Blocking occurs when a subroutine does not return until it either completes its task or fails with an error or exception. A process that is blocked is one that waits for some event, such as a resource becoming available or the completion of an I/O operation.In a multitasking computer system,...
on some event (such as I/O operation completion or a signal).

Two additional states are available for processes in systems that support virtual memory
Virtual memory
In computing, virtual memory is a memory management technique developed for multitasking kernels. This technique virtualizes a computer architecture's various forms of computer data storage , allowing a program to be designed as though there is only one kind of memory, "virtual" memory, which...
. In both of these states, processes are "stored" on secondary memory (typically a hard disk
Hard disk
A hard disk drive is a non-volatile, random access digital magnetic data storage device. It features rotating rigid platters on a motor-driven spindle within a protective enclosure. Data is magnetically read from and written to the platter by read/write heads that float on a film of air above the...
).


Swapped out and waiting


Swapped out and blocked

(Also called suspended and blocked.) Processes that are blocked may also be swapped out. In this event the process is both swapped out and blocked, and may be swapped back in again under the same circumstances as a swapped out and waiting process (although in this case, the process will move to the blocked state, and may still be waiting for a resource to become available).
The source of this article is wikipedia, the free encyclopedia.  The text of this article is licensed under the GFDL.