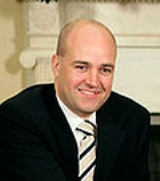 Encyclopedia
The Prime Minister is the head of government
Head of government
Head of government is the chief officer of the executive branch of a government, often presiding over a cabinet. In a parliamentary system, the head of government is often styled prime minister, chief minister, premier, etc...
in the Kingdom of Sweden. Before the creation of the office of a Prime Minister in 1876, Sweden did not have a head of government separate from its head of state
Head of State
A head of state is the individual that serves as the chief public representative of a monarchy, republic, federation, commonwealth or other kind of state. His or her role generally includes legitimizing the state and exercising the political powers, functions, and duties granted to the head of...
, namely the King
Monarch of Sweden
The monarchy of Sweden is the constitutional monarchy of the Kingdom of Sweden. The present monarch, Carl XVI Gustaf, has reigned since 15 September 1973. He and his immediate family undertake various official, ceremonial and representational duties...
, in whom the executive authority was vested. Louis De Geer, the architect behind the new bicameral Parliament
Parliament of Sweden
The Riksdag is the national legislative assembly of Sweden. The riksdag is a unicameral assembly with 349 members , who are elected on a proportional basis to serve fixed terms of four years...
of 1866 that replaced the centuries old Riksdag of the Estates
Riksdag of the Estates
The Riksdag of the Estates , was the name used for the Estates of the Swedish realm when they were assembled. Until its dissolution in 1866, the institution was the highest authority in Sweden next to the King...
, became the first officeholder in 1876.

Before 1876, when the office of a single prime minister
Prime minister
A prime minister is the most senior minister of cabinet in the executive branch of government in a parliamentary system. In many systems, the prime minister selects and may dismiss other members of the cabinet, and allocates posts to members within the government. In most systems, the prime...
was created, Sweden did not have a head of government separate from the head of state. Historically though, the most senior member of the Privy Council
Privy Council of Sweden
The High Council of Sweden or Council of the Realm consisted originally of those men of noble, common and clergical background, that the king saw fit for advisory service...
(during the absolute rule this was the Lord High Chancellor
Lord High Chancellor of Sweden
The Lord High Chancellor was a prominent and influential office in Sweden, from 1561 until 1680, excluding periods when the office was out of use. The office holder was a member of the Privy Council of Sweden...
) had certain similarities to the office of a head of government. This was most evident during the so called Age of Liberty from 1718 to 1772, when powers of the Monarch were greatly reduced and the President of the Privy Council became the most powerful political figure in Sweden.

From 1917 parliamentarian principles were de facto established in Sweden and the Monarch ceased to exercise his constitutional authority to appoint the Prime Minister and the Councillors of State (cabinet ministers) by his own discretion. From now on the Prime Minister depended on the support from Parliament, and in effect the Prime Minister came to exercise the Royal prerogative
Royal Prerogative
The royal prerogative is a body of customary authority, privilege, and immunity, recognized in common law and, sometimes, in civil law jurisdictions possessing a monarchy as belonging to the sovereign alone. It is the means by which some of the executive powers of government, possessed by and...
s. However, the Swedish term used for the Government during this period, still was Kungl. Maj:t, an abbreviation of Kunglig Majestät (Royal Majesty).

Until 1974 the executive authority in Sweden had been exercised through the King in Council
King in Council (Sweden)
King in Council, was a term used in Sweden before 1975 when the new Instrument of Government came into force.-History of the term Kunglig Majestät:The term Kunglig Majestät was...
. Constitution
Constitution
A constitution is a set of fundamental principles or established precedents according to which a state or other organization is governed. These rules together make up, i.e. constitute, what the entity is...
al reform provided a new Instrument of Government
Constitution of Sweden
The Swedish Constitution consists of four fundamental laws :* The 1810 Act of Succession * The 1949 Freedom of the Press Act * The 1974 Instrument of Government * The 1991 Fundamental Law on Freedom of Expression...
which de jure
De jure
De jure is an expression that means "concerning law", as contrasted with de facto, which means "concerning fact".De jure = 'Legally', De facto = 'In fact'....
established the parliamentary system
Parliamentary system
A parliamentary system is a system of government in which the ministers of the executive branch get their democratic legitimacy from the legislature and are accountable to that body, such that the executive and legislative branches are intertwined....
and created a cabinet government with constitutional powers not derived from the Crown, although this had been the de facto
De facto
De facto is a Latin expression that means "concerning fact." In law, it often means "in practice but not necessarily ordained by law" or "in practice or actuality, but not officially established." It is commonly used in contrast to de jure when referring to matters of law, governance, or...
case since 1917.

The government offices, including the Prime Minister's office, is located at Rosenbad
Rosenbad
Rosenbad is a building in central Stockholm, precinct of Norrmalm, designed by Art Nouveau architect Ferdinand Boberg and completed in 1902. It is located on Strömgatan on the North side of the river Norrström...
in central Stockholm
Stockholm
Stockholm is the capital and the largest city of Sweden and constitutes the most populated urban area in Scandinavia. Stockholm is the most populous city in Sweden, with a population of 851,155 in the municipality , 1.37 million in the urban area , and around 2.1 million in the metropolitan area...
, straight across the water from Helgeandsholmen
Helgeandsholmen
Helgeandsholmen is a small island in central Stockholm, Sweden. It is located north of Stadsholmen, and east of Strömsborg, with which, together with Riddarholmen, it forms Gamla stan, the old town of Stockholm...
with the parliament
Parliament of Sweden
The Riksdag is the national legislative assembly of Sweden. The riksdag is a unicameral assembly with 349 members , who are elected on a proportional basis to serve fixed terms of four years...
building.

Harpsund
Harpsund
Harpsund is a manor house located in Flen Municipality, Södermanland County, Sweden. Since May 22, 1953 Harpsund has been used as a country residence for the Prime Minister of Sweden.-History:...
, a manor house
Manor house
A manor house is a country house that historically formed the administrative centre of a manor, the lowest unit of territorial organisation in the feudal system in Europe. The term is applied to country houses that belonged to the gentry and other grand stately homes...
in Flen Municipality
Flen Municipality
Flen Municipality is a municipality in Södermanland County in southeast Sweden. Its seat is located in the city of Flen.The present municipality was formed in 1971 through the amalgamation of the City of Flen , the market town Malmköping and the surrounding countryside.-Localities:Figures from...
, Södermanland County
Södermanland County
Södermanland County is a county or län on the south east coast of Sweden. It borders the counties of Östergötland, Örebro, Västmanland, Uppsala, Stockholm and to the Baltic sea....
, has served as a country residence for the Prime Minister since 1953. The manor is also frequently used for governmental conferences and informal summits between the government, industry and organisations in Sweden.