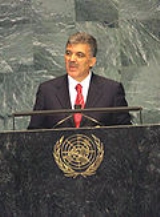 Encyclopedia
The President of Turkey (Cumhurbaşkanı) is the head of state
Head of State
A head of state is the individual that serves as the chief public representative of a monarchy, republic, federation, commonwealth or other kind of state. His or her role generally includes legitimizing the state and exercising the political powers, functions, and duties granted to the head of...
of the Republic of Turkey. The presidency is largely a ceremonial office but has some important functions. In this capacity he represents the Republic of Turkey, and the unity of the Turkish nation
Nation
A nation may refer to a community of people who share a common language, culture, ethnicity, descent, and/or history. In this definition, a nation has no physical borders. However, it can also refer to people who share a common territory and government irrespective of their ethnic make-up...
; he ensures the implementation of the Turkish constitution
Constitution of Turkey
This article relates to a current event. See also the Turkish constitutional referendum, 2010The Constitution of the Republic of Turkey is Turkey's fundamental law. It establishes the organization of the government and sets out the principles and rules of the state's conduct along with its...
, and the organized and harmonious functioning of the organs of state. The articles from 101 to 106 of the constitution establish all the requirements, election, duties and responsibilities for the office of the President. The office of the President of Turkey was established with the proclamation of the Republic of Turkey on October 29, 1923. The current office-holder is the 11th president, Abdullah Gül
Abdullah Gül
Dr. Abdullah Gül, GCB is the 11th and current President of the Republic of Turkey, serving in that office since 28 August 2007. He previously served for four months as Prime Minister from 2002-03, and as Minister of Foreign Affairs from 2003-07....
since August 28, 2007.

In order to become the President of Turkey, the candidate must have completed higher education, be at least forty years of age, and be a member of the Turkish Grand National Assembly or a Turkish citizen eligible to be a deputy.

The president-elect has to sever his relations, if any, with his political party, and his status as a member of the Turkish Grand National Assembly must cease.

The election of the President must begin at least 30 days before the term of office of the incumbent president expires or 10 days after the presidency falls vacant, and must be completed within 30 days of the beginning of the election. Candidates must be declared to the bureau of the parliament within the first 10 days of this period, and elections must be completed within the remaining 20 days.

Formerly, the President was elected by the members of the Turkish Parliament. According to an amendment that was drafted in 2007, the future presidents shall be elected by the citizens through a public vote. The candidates must be over forty years old and must have completed their higher education. They can either be members of the Turkish Parliament, or common Turkish citizens who fulfill these requirements and who are eligible to become members of parliament.

The president is selected for a term of office of 5 years (it was previously 7 years, but has been reduced to 5 years in 2007), and may be re-elected only once, for a second term.

The term of office of the incumbent president continues until the president-elect takes office.

On assuming office, the president takes the following oath before the parliament:

"In my capacity as President of the Republic, I swear upon my honor and repute before the great Turkish nation and before history to safeguard the existence and independence of the state, the indivisible integrity of country and nation, and the sovereignty of the nation without restriction or stipulation; to abide by the Constitution, the rule of law, democracy, the principles and reforms of Atatürk, and the principle of a secular republic; not to deviate from the ideal of all enjoying human rights and basic freedoms in peace, prosperity and in a spirit of national solidarity and justice; to preserve and enhance the glory and honor of the Republic of Turkey and to work with all my strength to perform with impartiality the functions that I have assumed."

The president performs also the duties of selection and appointment, and other duties conferred by the constitution and laws. 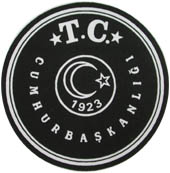