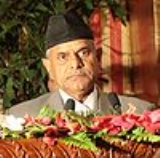 Encyclopedia
The position of President of Nepal constitutes the head of state
Head of State
A head of state is the individual that serves as the chief public representative of a monarchy, republic, federation, commonwealth or other kind of state. His or her role generally includes legitimizing the state and exercising the political powers, functions, and duties granted to the head of...
of Nepal
Nepal
Nepal , officially the Federal Democratic Republic of Nepal, is a landlocked sovereign state located in South Asia. It is located in the Himalayas and bordered to the north by the People's Republic of China, and to the south, east, and west by the Republic of India...
and was created after the country was declared a republic in May 2008. Girija Prasad Koirala
Girija Prasad Koirala
Girija Prasad Koirala was a Nepalese politician and the President of the Nepali Congress, a major political party. He was Prime Minister of Nepal for four times, serving from 1991 to 1994, 1998 to 1999, 2000 to 2001, and from 2006 to 2008; he was also Acting Head of State from January 2007 to July...
was the first head of state of Nepal elected by the major parties on 19 May 2006. The current head of state of Nepal is President Ram Baran Yadav
Ram Baran Yadav
Dr Ram Baran Yadav is the current President of Nepal. He was elected in July 2008 and is the country's first President. He previously served as Minister of Health and as General Secretary of the Nepali Congress party....
, elected in July 2008,. The President is to be formally addressed as "The Right Honourable ."


History of the Presidency