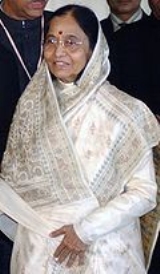 Overview
The President of India is the head of state
Head of State
A head of state is the individual that serves as the chief public representative of a monarchy, republic, federation, commonwealth or other kind of state. His or her role generally includes legitimizing the state and exercising the political powers, functions, and duties granted to the head of...
and first citizen of India
India
India , officially the Republic of India , is a country in South Asia. It is the seventh-largest country by geographical area, the second-most populous country with over 1.2 billion people, and the most populous democracy in the world...
, as well as the Supreme Commander
Supreme Commander
Supreme Commander may refer to:* Commander-in-chief, a military rank**Supreme Allied Commander, title held by the most senior commander within certain multinational military alliances...
of the Indian Armed Forces. President of India is also the formal head of all the three branches of Indian Democracy - Legislature, Executive and Judiciary. Powers to pardon and clemency vests with the President of India.

Although Article 53 of the Constitution
Constitution
A constitution is a set of fundamental principles or established precedents according to which a state or other organization is governed. These rules together make up, i.e. constitute, what the entity is...
states that the President can exercise their powers directly, with few exceptions, all of the authority vested in the President is in practice exercised by the Council of Ministers
Indian Cabinet Ministers
The Cabinet of India is the collective decision-making body of the Government of India, composed of the Prime Minister and 35 Cabinet Ministers, the most senior of the government ministers...
, headed by the Prime Minister
Prime Minister of India
The Prime Minister of India , as addressed to in the Constitution of India — Prime Minister for the Union, is the chief of government, head of the Council of Ministers and the leader of the majority party in parliament...
.

Duties of a president
More
x