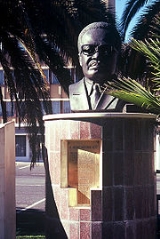 Encyclopedia
The President of the Republic of Angola (Presidente da República de Angola in Portuguese
Portuguese language
Portuguese is a Romance language that arose in the medieval Kingdom of Galicia, nowadays Galicia and Northern Portugal. The southern part of the Kingdom of Galicia became independent as the County of Portugal in 1095...
) is both head of state
Head of State
A head of state is the individual that serves as the chief public representative of a monarchy, republic, federation, commonwealth or other kind of state. His or her role generally includes legitimizing the state and exercising the political powers, functions, and duties granted to the head of...
and head of government
Head of government
Head of government is the chief officer of the executive branch of a government, often presiding over a cabinet. In a parliamentary system, the head of government is often styled prime minister, chief minister, premier, etc...
in Angola
Angola
Angola, officially the Republic of Angola , is a country in south-central Africa bordered by Namibia on the south, the Democratic Republic of the Congo on the north, and Zambia on the east; its west coast is on the Atlantic Ocean with Luanda as its capital city...
. While the President appoints a Prime Minister
Prime Minister of Angola
The Prime Minister of Angola is a high government official in Angola, but is not the head of government.Along with the rest of the Council of Ministers, the Prime Minister is appointed by the President. The position was originally created when Angola achieved independence from Portugal on 11...
, executive
Executive (government)
Executive branch of Government is the part of government that has sole authority and responsibility for the daily administration of the state bureaucracy. The division of power into separate branches of government is central to the idea of the separation of powers.In many countries, the term...
authority usually belongs to the President.

Under Dos Santos's leadership, Angola became a multi-party democracy. The most recent elections, held in 1992, reelected Dos Santos with 49% of the votes. Dos Santos's opponent, Jonas Savimbi
Jonas Savimbi
Jonas Malheiro Savimbi was an Angolan political leader. He founded and led UNITA, a movement that first waged a guerrilla war against Portuguese colonial rule, 1966–1974, then confronted the rival MPLA during the decolonization conflict, 1974/75, and after independence in 1975 fought the ruling...
of the National Union for Total Independence of Angola (UNITA
UNITA
The National Union for the Total Independence of Angola is the second-largest political party in Angola. Founded in 1966, UNITA fought with the Popular Movement for the Liberation of Angola in the Angolan War for Independence and then against the MPLA in the ensuing civil war .The war was one...
) party, claimed that the elections were fraudulent.

In January 2010 the National Assembly
National Assembly of Angola
The National Assembly is the legislative branch of the government of Angola.The National Assembly is a unicameral body, with 220 members: 130 members elected by proportional representation and 90 members elected by provincial districts. Theoretically, the Assembly sits for a four-year term...
approved a new constitution, according to which the leader of the party with the most seats in the Assembly would become president, rather than a public vote taking place. The new constitution also limits a president to serving two terms, although it does not count terms served to date, and abolished the post of Prime Minister
Prime Minister of Angola
The Prime Minister of Angola is a high government official in Angola, but is not the head of government.Along with the rest of the Council of Ministers, the Prime Minister is appointed by the President. The position was originally created when Angola achieved independence from Portugal on 11...
, the responsibilities of which will pass to the vice-president.
The source of this article is wikipedia, the free encyclopedia.  The text of this article is licensed under the GFDL.