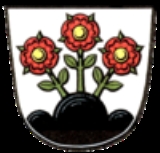 Encyclopedia
Praunheim is a district or Stadtteil of Frankfurt am Main, Germany
Germany
Germany , officially the Federal Republic of Germany , is a federal parliamentary republic in Europe. The country consists of 16 states while the capital and largest city is Berlin. Germany covers an area of 357,021 km2 and has a largely temperate seasonal climate...
. It is part of the Ortsbezirk Mitte-West, and is subdivided into 5 Stadtbezirke.

It is located along the North bank of the river Nidda
Nidda
Nidda could refer to:*Niddah, a concept in Judaism*Niddah , a tractate in the Mishna and Talmud*Nidda, Hesse, a town in Germany*Nidda , a river in Germany...
and composed of two settlements: to the East, old Praunheim, a typical Hessian village with a central commercial street and, to the West, the Praunheim Settlement, one of the major public and private projects designed by Frankfurt's housing director, Ernst May
Ernst May
Ernst May was a German architect and city planner.May successfully applied urban design techniques to the city of Frankfurt am Main during Germany's Weimar period, and in 1930 less successfully exported those ideas to Soviet Union cities, newly created under Stalinist rule...
. The settlement comprises 1500 residences, was built from 1926 through 1929, and was part of May's internationally recognized housing effort.

Notable residents of Praunheim have included the jazz
Jazz
Jazz is a musical style that originated at the beginning of the 20th century in African American communities in the Southern United States. It was born out of a mix of African and European music traditions. From its early development until the present, jazz has incorporated music from 19th and 20th...
trombonist Albert Mangelsdorff
Albert Mangelsdorff
Albert Mangelsdorff was one of the most accredited and innovative trombonists of modern jazz who became famous for his distinctive technique of playing multiphonics.-Biography:...
, his brother, the saxophonist Emil Mangelsdorff
Emil Mangelsdorff
Emil Mangelsdorff is a jazz musician who plays alto saxophone, soprano saxophone, clarinet and flute.In 1942 and 1943 Mangelsdorff studied clarinet at the Hoch Conservatory in Frankfurt. As a member of the Frankfurt Hot Club his performing of jazz lead him to being imprisoned by the Gestapo...
, the film maker Rosa von Praunheim
Rosa von Praunheim
Rosa von Praunheim , in Riga, Latvia. His given name is Holger Mischwitzky. He is a German film director, author, painter and gay rights activist. Openly gay, he is one of the initiators of the gay rights movement in Germany....
.
The source of this article is wikipedia, the free encyclopedia.  The text of this article is licensed under the GFDL.