Poulnabrone Dolmen is a portal tomb in the Burren
The Burren
The Burren is a karst-landscape region or alvar in northwest County Clare, in Ireland. It is one of the largest karst landscapes in Europe. The region measures approximately 250 square kilometres and is enclosed roughly within the circle made by the villages Ballyvaughan, Kinvara, Tubber, Corofin,...
, County Clare
County Clare
-History:There was a Neolithic civilisation in the Clare area — the name of the peoples is unknown, but the Prehistoric peoples left evidence behind in the form of ancient dolmen; single-chamber megalithic tombs, usually consisting of three or more upright stones...
, Ireland
Ireland
Ireland is an island to the northwest of continental Europe. It is the third-largest island in Europe and the twentieth-largest island on Earth...
, dating back to the Neolithic
Neolithic
The Neolithic Age, Era, or Period, or New Stone Age, was a period in the development of human technology, beginning about 9500 BC in some parts of the Middle East, and later in other parts of the world. It is traditionally considered as the last part of the Stone Age...
period, probably between 4200 BC to 2900 BC. It is situated 8km (5 miles) south of Ballyvaughan
Ballyvaughan
Ballyvaughan or Ballyvaghan is a small harbour village in County Clare, Ireland. It is located on the south shores of Galway Bay, in the northwest corner of The Burren, an area of great rocky expanse, considered by many to be a unique landscape....
in the parish of Carran, 9.6km (6 miles) north-west of Kilnaboy
Kilnaboy
Kilnaboy or Killinaboy is the name of a small village, townland and parish in County Clare, Ireland. It is situated in The Burren, an area rich in heritage and natural beauty and Mullaghmore mountain is close by...
. (grid ref: 123 200) 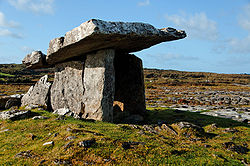 The dolmen consists of a twelve-foot, thin, slab-like, tabular capstone supported by two slender portal stones, which lift the capstone 1.8m (6ft) from the ground, creating a chamber in a 9m (30ft) low cairn. The cairn
Cairn
Cairn is a term used mainly in the English-speaking world for a man-made pile of stones. It comes from the or . Cairns are found all over the world in uplands, on moorland, on mountaintops, near waterways and on sea cliffs, and also in barren desert and tundra areas...
helped stabilize the tomb chamber, and would have been no higher during the Neolithic. The entrance faces north and is crossed by a low sill stone. 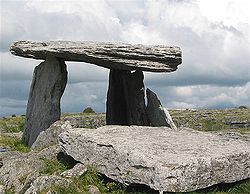 A crack was discovered in the eastern portal stone in 1985. Following the resulting collapse, the dolmen was dismantled, and the cracked stone was replaced. Excavations during this time found that between 16 and 22 adults and 6 children were buried under the monument. Personal items buried with the dead included a polished stone axe, a bone pendant, quartz crystals, weapons and pottery. In the Bronze Age
Bronze Age
The Bronze Age is a period characterized by the use of copper and its alloy bronze as the chief hard materials in the manufacture of some implements and weapons. Chronologically, it stands between the Stone Age and Iron Age...
, around 1700BC, a newborn baby was buried in the portico, just outside the entrance. With its dominating presence on the limestone landscape of the Burren, the tomb was likely a centre for ceremony and ritual until well into the Celtic period or it may have served as a territorial marker in the Neolithic landscape.