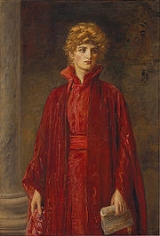 Encyclopedia
Portia is the heroine of William Shakespeare
William Shakespeare
William Shakespeare was an English poet and playwright, widely regarded as the greatest writer in the English language and the world's pre-eminent dramatist. He is often called England's national poet and the "Bard of Avon"...
's The Merchant of Venice
The Merchant of Venice
The Merchant of Venice is a tragic comedy by William Shakespeare, believed to have been written between 1596 and 1598. Though classified as a comedy in the First Folio and sharing certain aspects with Shakespeare's other romantic comedies, the play is perhaps most remembered for its dramatic...
. A rich, beautiful, and intelligent heiress, she is bound by the lottery set forth in her father's will, which gives potential suitors the chance to choose between three caskets composed of gold, silver and lead. If they choose the right casket – the casket containing Portia's portrait – they win Portia's hand in marriage. If they choose the wrong casket, they must leave and never seek another woman in marriage. Portia favours Bassanio, but is not allowed to give him any clues to assist in his choice. Later in the play, she disguises herself as a man, then assumes the role of a lawyer's apprentice whereby she saves the life of Bassanio's friend, Antonio
Antonio (Merchant of Venice)
Antonio is the title character in Shakespeare’s The Merchant of Venice. He is a middle-aged bachelor and merchant by trade who has his financial interests tied up in overseas shipments when the play begins. He is kind, generous, honest and confident, and is loved and revered by all the Christians...
, in court. She also disguises herself as Balthazar, a young doctor of law.

Portia is one of the most prominent of Shakespeare's heroines in his mature romantic comedies. She is beautiful, gracious, rich, intelligent, and quick-witted, with high standards for her potential romantic partners. She obeys her father's will while steadfastly seeking to obtain Bassanio. She demonstrates tact to the Princes of Morocco and Aragon, who unsuccessfully seek her hand. In the court scenes, Portia finds a technicality in the bond, thereby outwitting Shylock
Shylock
Shylock is a fictional character in Shakespeare's The Merchant of Venice.-In the play:In The Merchant of Venice, Shylock is a Jewish moneylender who lends money to his Christian rival, Antonio, setting the security at a pound of Antonio's flesh...
and saving Antonio's life when everyone else fails. Yet, she also shows immense injustice and cruelty towards the Job
Job (Biblical figure)
Job is the central character of the Book of Job in the Hebrew Bible. Job is listed as a prophet of God in the Qur'an.- Book of Job :The Book of Job begins with an introduction to Job's character — he is described as a blessed man who lives righteously...
-like figure of Shylock and those who are sympathetic with Shylock see her as the epitome
Epitome
An epitome is a summary or miniature form; an instance that represents a larger reality, also used as a synonym for embodiment....
of blunt, barbaric, Christian primitivism. It is Portia who delivers one of the most famous speeches in The Merchant of Venice:

The quality of mercy is not strain'd.
It droppeth as the gentle rain from heaven
Upon the place beneath. It is twice blest:
It blesseth him that gives and him that takes.

The strength of Portia as a role has made it attractive to many notable actresses. Frances Abington
Frances Abington
Frances "Fanny" Abington was a British Actress.-Biography:She was born Frances Barton, the daughter of a private soldier, and began her career as a flower girl and a street singer. As a servant to a French milliner, she learned about costume and acquired a knowledge of French which afterwards...
, Sarah Siddons
Sarah Siddons
Sarah Siddons was a Welsh actress, the best-known tragedienne of the 18th century. She was the elder sister of John Philip Kemble, Charles Kemble, Stephen Kemble, Ann Hatton and Elizabeth Whitlock, and the aunt of Fanny Kemble. She was most famous for her portrayal of the Shakespearean character,...
and Elizabeth Whitlock
Elizabeth Whitlock
Elizabeth Whitlock was a British actress.A member of the Kemble family of actors, she made her first appearance on the stage in 1783 at Drury Lane as Portia. In 1785 she married Charles E. Whitlock, went with him to America, and played with much success there...
all played Portia in the 18th century when actresses first started appearing on stage. More recently, the role has been depicted in the cinema and on television by a number of notable actresses such as Maggie Smith
Maggie Smith
Dame Margaret Natalie Smith, DBE , better known as Maggie Smith, is an English film, stage, and television actress who made her stage debut in 1952 and is still performing after 59 years...
, Claire Bloom
Claire Bloom
Claire Bloom is an English film and stage actress.-Early life:Bloom was born in the North London suburb of Finchley, the daughter of Elizabeth and Edward Max Blume, who worked in sales...
, Sybil Thorndike
Sybil Thorndike
Dame Agnes Sybil Thorndike CH DBE was a British actress.-Early life:She was born in Gainsborough, Lincolnshire to Arthur Thorndike and Agnes Macdonald. Her father was a Canon of Rochester Cathedral...
, Joan Plowright
Joan Plowright
Joan Ann Plowright, Baroness Olivier, DBE , better known as Dame Joan Plowright, is an English actress, whose career has spanned over sixty years. Throughout her career she has won two Golden Globe Awards and a Tony Award and has been nominated for an Academy Award, an Emmy, and two BAFTA Awards...
and Gemma Jones
Gemma Jones
Gemma Jones is an English character actress on both stage and screen.-Early life:Jones was born in London, England, the daughter of Irene and Griffith Jones, an actor. Her brother, Nicholas Jones, is also an actor...
.

Portia's nature has received some negative critiques. The famous Jewish writer Wolf Mankowitz
Wolf Mankowitz
Cyril Wolf Mankowitz was an English writer, playwright and screenwriter of Russian Jewish descent.-Early life:...
dubbed her a "cold, snobbish little bitch" in a video he made about anti-Semitism against Shylock the moneylender.

The concept of 'rhetoric' and its abuse is brought to light by Portia: the idea that an unjust argument may win through eloquence, loopholes and technicalities, regardless of the moral question at hand. 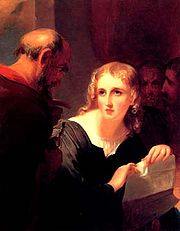 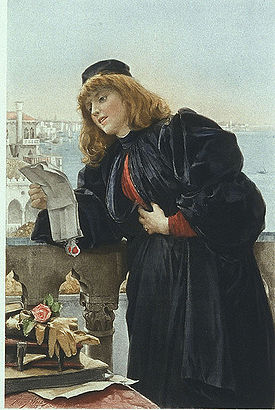 The character of Portia has had a considerable and long-lived cultural impact. Portia is the name John Adams
John Adams
John Adams was an American lawyer, statesman, diplomat and political theorist. A leading champion of independence in 1776, he was the second President of the United States...
used to address his wife Abigail
Abigail Adams
Abigail Adams was the wife of John Adams, who was the second President of the United States, and the mother of John Quincy Adams, the sixth...
in his letters, presumably after Shakespeare's character. (Abigail addressed her husband as "Lysander
Lysander (Shakespeare)
Lysander is one of the iconic lovers in William Shakespeare's play A Midsummer Night's Dream. A handsome young man of Athens, Lysander is in love with Hermia and plans to run away from her father with her to escape Athenian law and wed. But his plans are disrupted when Oberon decides to have some...
" in letters, a reference to a Shakespearean character appearing in A Midsummer Night's Dream
A Midsummer Night's Dream
A Midsummer Night's Dream is a play that was written by William Shakespeare. It is believed to have been written between 1590 and 1596. It portrays the events surrounding the marriage of the Duke of Athens, Theseus, and the Queen of the Amazons, Hippolyta...
.)

The New England School of Law
New England School of Law
New England School of Law is a private law school in Boston, Massachusetts. It was founded in 1908 as a law school for women.-History:...
was originally known as the Portia Law School when it was established in 1908 as a women-only law school, and was known by that name until 1969. In his Rumpole
Rumpole of the Bailey
Rumpole of the Bailey is a British television series created and written by the British writer and barrister John Mortimer which starred Leo McKern as Horace Rumpole, an ageing London barrister who defends any and all clients...
novels (filmed for the ITV series), author John Mortimer
John Mortimer
Sir John Clifford Mortimer, CBE, QC was a British barrister, dramatist, screenwriter and author.-Early life:...
has Rumpole call Phyllida Erskine-Brown (née Trant) the 'Portia of our Chambers'. Despite Portia's lack of formal legal training her ingenuity is of the variety exhibited by what is known as a Philadelphia lawyer
Philadelphia lawyer
Philadelphia Lawyer is a term to describe a lawyer who knows the most detailed and minute points of law or is an exceptionally competent lawyer. Its first usage dates back to 1788....
(i.e., a lawyer who prevails on technicalities rather than the legal merits of his argument).

In 1986, a moon of Uranus
Uranus
Uranus is the seventh planet from the Sun. It has the third-largest planetary radius and fourth-largest planetary mass in the Solar System. It is named after the ancient Greek deity of the sky Uranus , the father of Cronus and grandfather of Zeus...
was named after Portia (see Uranus' natural satellites
Uranus' natural satellites
Uranus, the seventh planet of the Solar System, has 27 known moons, all of which are named after characters from the works of William Shakespeare and Alexander Pope. William Herschel discovered the first two moons, Titania and Oberon, in 1787, and the other spherical moons were discovered in 1851...
). A version of the character has even appeared in the Mirror Universe
Mirror Universe (Star Trek)
The Mirror Universe is a fictional parallel universe in which the plots of several Star Trek television episodes take place...
of Star Trek
Star Trek
Star Trek is an American science fiction entertainment franchise created by Gene Roddenberry. The core of Star Trek is its six television series: The Original Series, The Animated Series, The Next Generation, Deep Space Nine, Voyager, and Enterprise...
.