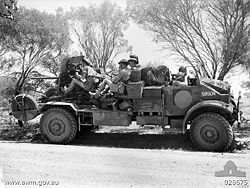 A portee is a truck
Truck
A truck or lorry is a motor vehicle designed to transport cargo. Trucks vary greatly in size, power, and configuration, with the smallest being mechanically similar to an automobile...
that carries a gun on its bed, such that the gun is not affixed permanently to the vehicle, can be quickly unloaded, and can be fired from the truck.

While the term portee can be used to denote any truck carrying a gun on its bed, it is most often used to describe
portees used by British
United Kingdom
The United Kingdom of Great Britain and Northern IrelandIn the United Kingdom and Dependencies, other languages have been officially recognised as legitimate autochthonous languages under the European Charter for Regional or Minority Languages...
/Commonwealth
Commonwealth of Nations
The Commonwealth of Nations, normally referred to as the Commonwealth and formerly known as the British Commonwealth, is an intergovernmental organisation of fifty-four independent member states...
forces in the North African Campaign
North African campaign
During the Second World War, the North African Campaign took place in North Africa from 10 June 1940 to 13 May 1943. It included campaigns fought in the Libyan and Egyptian deserts and in Morocco and Algeria and Tunisia .The campaign was fought between the Allies and Axis powers, many of whom had...
of World War II
World War II
World War II, or the Second World War , was a global conflict lasting from 1939 to 1945, involving most of the world's nations—including all of the great powers—eventually forming two opposing military alliances: the Allies and the Axis...
. A modern similar term for such a vehicle is a technical
Technical (fighting vehicle)
A technical is a type of improvised fighting vehicle, typically a civilian or military non-combat vehicle, modified to provide an offensive capability similar to a military gun truck...
.

Two-pounder (40mm) anti-tank gun portee : A 2 pounder anti-tank gun
Ordnance QF 2 pounder
The Ordnance QF 2-pounder was a British anti-tank and vehicle-mounted gun, employed in the Second World War. It was actively used in the Battle of France, and during the North Africa campaign...
mounted on a Morris
Morris Motor Company
The Morris Motor Company was a British car manufacturing company. After the incorporation of the company into larger corporations, the Morris name remained in use as a marque until 1984 when British Leyland's Austin Rover Group decided to concentrate on the more popular Austin marque...
15 cwt truck, Chevrolet WA or WB 30cwt truck (Ian Allen publishing) CMP Ford F30 or Chevrolet C30 trucks.
Six-pounder (57mm) anti-tank gun portee : A 6 pounder anti-tank gun
Ordnance QF 6 pounder
The Ordnance Quick-Firing 6-pounder 7 cwt, or just 6 pounder, was a British 57 mm gun, their primary anti-tank gun during the middle of World War II, as well as the main armament for a number of armoured fighting vehicles...
mounted on a Bedford QLT 3-ton lorry or Austin K5 3ton lorry both of which had a special frame only body carrying the gun, crew, ammunition and the rarely used side shields.
a F60 or C60 with cut down number 13 cab was similarly used.

On 21 November 1941 at Sidi Rezegh, Libya
Libya
Libya is an African country in the Maghreb region of North Africa bordered by the Mediterranean Sea to the north, Egypt to the east, Sudan to the southeast, Chad and Niger to the south, and Algeria and Tunisia to the west....
Second Lieutenant George Ward-Gunn
George Ward Gunn
George Ward Gunn VC MC was an English recipient of the Victoria Cross, the highest and most prestigious award for gallantry in the face of the enemy that can be awarded to British and Commonwealth forces.-Life:...
destroyed two German tanks while fighting from a burning two-pounder portee. He was posthumously awarded the Victoria Cross
Victoria Cross
The Victoria Cross is the highest military decoration awarded for valour "in the face of the enemy" to members of the armed forces of various Commonwealth countries, and previous British Empire territories....
for his valour in this action.

The battle has been cited by modern historians as an epic example of leadership and courage under fire. Ward-Gunn was led however, by Major Bernard Pinney MC RHA who fought with Ward-Gunn's troop until it had only one remaining gun in action. Pinney ordered Ward-Gunn to remove the dead crew on a serviceable gun and get it back into action. In a short space of time the gun caught fire so Pinney, exposed to enemy fire, got up to put out the fire, then when Ward-Gunn was killed, Pinney pushed his body out of the way to continue the action single handedly until it was eventually put out of action by direct enemy fire. Despite the inadequacy of the 2-pounder portee guns that only had effect at short range, the battle halted a divisional advance. Unfortunately Pinney was killed by a stray shell the following day and was never acknowledged for his part in the battle until witnesses from the supporting rifle company told their story.