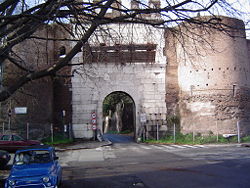 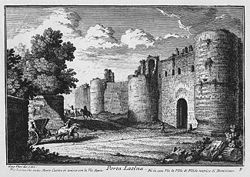 The Porta Latina is a single-arched gate in the Aurelian Walls
Aurelian Walls
The Aurelian Walls is a line of city walls built between 271 and 275 in Rome, Italy, during the reign of the Roman Emperors Aurelian and Probus....
of ancient Rome
Rome
Rome is the capital of Italy and the country's largest and most populated city and comune, with over 2.7 million residents in . The city is located in the central-western portion of the Italian Peninsula, on the Tiber River within the Lazio region of Italy.Rome's history spans two and a half...
. It marked the Rome end of the Via Latina
Via Latina
The Via Latina was a Roman road of Italy, running southeast from Rome for about 200 kilometers.It led from the Porta Latina in the Aurelian walls of Rome to the pass of Mons Algidus; it was important in the early military history of Rome...
and gives its name to the church of San Giovanni a Porta Latina
San Giovanni a Porta Latina
San Giovanni a Porta Latina is a Basilica church in Rome, Italy, near the Porta Latina of the Aurelian Wall...
. Most of the present structure dates to Honorius
Honorius (emperor)
Honorius , was Western Roman Emperor from 395 to 423. He was the younger son of emperor Theodosius I and his first wife Aelia Flaccilla, and brother of the eastern emperor Arcadius....
, including the arch's voussoir
Voussoir
A voussoir is a wedge-shaped element, typically a stone, used in building an arch or vault.Although each unit in an arch or vault is a voussoir, two units are of distinct functional importance: the keystone and the springer. The keystone is the center stone or masonry unit at the apex of an arch. A...
s (though they are often wrongly attributed to a 6th century restoration by Belisarius
Belisarius
Flavius Belisarius was a general of the Byzantine Empire. He was instrumental to Emperor Justinian's ambitious project of reconquering much of the Mediterranean territory of the former Western Roman Empire, which had been lost less than a century previously....
, due to a cross and circle sculpted on the inner keystone
Keystone (architecture)
A keystone is the wedge-shaped stone piece at the apex of a masonry vault or arch, which is the final piece placed during construction and locks all the stones into position, allowing the arch to bear weight. This makes a keystone very important structurally...
, and the Chi Rho
Chi Rho
The Chi Rho is one of the earliest forms of christogram, and is used by Christians. It is formed by superimposing the first two letters chi and rho of the Greek word "ΧΡΙΣΤΟΣ" =Christ in such a way to produce the monogram ☧...
between Α and Ω
Alpha and Omega
The term Alpha and Omega comes from the phrase "I am the alpha and the omega" , an appellation of Jesus in the Book of Revelation ....
sculpted on the outer keystone). The gate retained its name throughout the Middle Ages. Also nearby are the oratory of San Giovanni in Oleo
San Giovanni in Oleo
San Giovanni in Oleo is a small church in Rome, Italy, devoted to Saint John the Evangelist, on the place where, according to tradition, his martyrdom was attempted....
and the pagan Columbarium of Pomponius Hylas
Columbarium of Pomponius Hylas
The Columbarium of Pomponius Hylas is a 1st century AD Roman columbarium, situated near the Porta Latina on the Via Appia, Rome, Italy. It was discovered and excavated in 1831 by Pietro Campana....
.

The gate's single arch is built of irregular blocks of travertine
Travertine
Travertine is a form of limestone deposited by mineral springs, especially hot springs. Travertine often has a fibrous or concentric appearance and exists in white, tan, and cream-colored varieties. It is formed by a process of rapid precipitation of calcium carbonate, often at the mouth of a hot...
, with a row of five windows above on the outside, and a sixth in brick, at the south end, surmounted by stone battlements. The arch is flanked by two semi-circular towers of brick-faced concrete (almost entirely rebuilt, probably in the 6th century), which do not rise above the top of the central section. The north tower rests on masonry foundations that may have belonged to a tomb.