Encyclopedia
Point Barrow or Nuvuk is a headland
Headlands and bays
Headlands and bays are two related features of the coastal environment.- Geology and geography :Headlands and bays are often found on the same coastline. A bay is surrounded by land on three sides, whereas a headland is surrounded by water on three sides. Headlands are characterized by high,...
on the Arctic coast
Arctic Ocean
The Arctic Ocean, located in the Northern Hemisphere and mostly in the Arctic north polar region, is the smallest and shallowest of the world's five major oceanic divisions...
in the U.S. state
U.S. state
A U.S. state is any one of the 50 federated states of the United States of America that share sovereignty with the federal government. Because of this shared sovereignty, an American is a citizen both of the federal entity and of his or her state of domicile. Four states use the official title of...
of Alaska
Alaska
Alaska is the largest state in the United States by area. It is situated in the northwest extremity of the North American continent, with Canada to the east, the Arctic Ocean to the north, and the Pacific Ocean to the west and south, with Russia further west across the Bering Strait...
, 9 miles (14.5 km) northeast of Barrow
Barrow, Alaska
Barrow is the largest city of the North Slope Borough in the U.S. state of Alaska. It is one of the northernmost cities in the world and is the northernmost city in the United States of America, with nearby Point Barrow being the nation's northernmost point. Barrow's population was 4,212 at the...
. It is the northernmost point
Extreme points of the United States
This is a list of the extreme points of the United States, the points that are farther north, south, east, or west than any other location in the country. Also included are extreme points in elevation, extreme distances, and other points of peculiar geographic interest.-Northernmost:*Point Barrow,...
of all the territory of the United States
United States
The United States of America is a federal constitutional republic comprising fifty states and a federal district...
, at 71°23′20"N 156°28′45"W. The distance to the North Pole
North Pole
The North Pole, also known as the Geographic North Pole or Terrestrial North Pole, is, subject to the caveats explained below, defined as the point in the northern hemisphere where the Earth's axis of rotation meets its surface...
is 1122 nmi (1,291.2 mi; 2,077.9 km), or 40 miles (64.4 km) further than the distance from Murchison Promontory
Murchison Promontory
Murchison Promontory is a peninsula in northern Canada that is the northernmost point on mainland Canada and on the mainland of North America; it is also one of the Extreme points of Earth....
, Nunavut
Nunavut
Nunavut is the largest and newest federal territory of Canada; it was separated officially from the Northwest Territories on April 1, 1999, via the Nunavut Act and the Nunavut Land Claims Agreement Act, though the actual boundaries had been established in 1993...
to the Pole.

Point Barrow is also an important geographical landmark, marking the limit between two marginal seas of the Arctic
Arctic
The Arctic is a region located at the northern-most part of the Earth. The Arctic consists of the Arctic Ocean and parts of Canada, Russia, Greenland, the United States, Norway, Sweden, Finland, and Iceland. The Arctic region consists of a vast, ice-covered ocean, surrounded by treeless permafrost...
, the Chukchi Sea
Chukchi Sea
Chukchi Sea is a marginal sea of the Arctic Ocean. It is bounded on the west by the De Long Strait, off Wrangel Island, and in the east by Point Barrow, Alaska, beyond which lies the Beaufort Sea. The Bering Strait forms its southernmost limit and connects it to the Bering Sea and the Pacific...
on its western side and the Beaufort Sea
Beaufort Sea
The Beaufort Sea is a marginal sea of the Arctic Ocean, located north of the Northwest Territories, the Yukon, and Alaska, west of Canada's Arctic islands. The sea is named after hydrographer Sir Francis Beaufort...
on the eastern, both delimited to the North by the edge of the map as seen here.

Archaeological evidence indicates that Point Barrow was occupied by the ancestors of the Inupiat almost 1,000 years prior to the arrival of the first Europeans. The headland is an important archaeological site, yielding burials and artifacts associated with the Thule culture
Thule people
The Thule or proto-Inuit were the ancestors of all modern Inuit. They developed in coastal Alaska by AD 1000 and expanded eastwards across Canada, reaching Greenland by the 13th century. In the process, they replaced people of the earlier Dorset culture that had previously inhabited the region...
, including ulu
Ulu
An ulu is an all-purpose knife traditionally used by Eskimo women, both Yupik and Inuit. It is utilized in applications as diverse as skinning and cleaning animals, cutting a child's hair, cutting food and, if necessary, trimming blocks of snow and ice used to build an igloo...
it and bola
Bolas
Bolas are a throwing weapon superficially similar to the surujin, made of weights on the ends of interconnected cords, designed to capture animals by entangling their legs...
. The waters off Point Barrow are on the Bowhead Whale
Bowhead Whale
The bowhead whale is a baleen whale of the right whale family Balaenidae in suborder Mysticeti. A stocky dark-colored whale without a dorsal fin, it can grow to in length. This thick-bodied species can weigh to , second only to the blue whale, although the bowhead's maximum length is less than...
s migration route and it is surmised that the site was chosen to make hunting easier. There are also burial mounds
Tumulus
A tumulus is a mound of earth and stones raised over a grave or graves. Tumuli are also known as barrows, burial mounds, Hügelgrab or kurgans, and can be found throughout much of the world. A tumulus composed largely or entirely of stones is usually referred to as a cairn...
in the area, at the nearby Birnirk Site
Birnirk Site
The Birnirk Site is an archaeological site near Barrow, Alaska. It includes sixteen prehistoric mounds which have yielded evidence of very early Birnirk and Thule culture...
, associated with the earlier Birnirk culture
Birnirk culture
The Birnirk culture is a prehistoric Inuit civilization of the north coast of Alaska, dating from 500 AD to 900 AD and disappearing around 1000 AD. It succeeded the Punuk and Old Bering Sea/Okvik cultures and is distinguished from those cultures due to different art and harpoon styles. It preceded...
, identified in 1912 by Vilhjalmur Stefansson
Vilhjalmur Stefansson
Vilhjalmur Stefansson was a Canadian Arctic explorer and ethnologist.-Early life:Stefansson, born William Stephenson, was born at Gimli, Manitoba, Canada, in 1879. His parents had emigrated from Iceland to Manitoba two years earlier...
while excavating in the area.

It was named by English
England
England is a country that is part of the United Kingdom. It shares land borders with Scotland to the north and Wales to the west; the Irish Sea is to the north west, the Celtic Sea to the south west, with the North Sea to the east and the English Channel to the south separating it from continental...
explorer Frederick William Beechey
Frederick William Beechey
Frederick William Beechey was an English naval officer and geographer. He was the son of Sir William Beechey, RA., and was born in London.-Career:...
, in 1826 for Sir John Barrow
Sir John Barrow, 1st Baronet
Sir John Barrow, 1st Baronet, FRS, FRGS was an English statesman.-Career:He was born the son of Roger Barrow in the village of Dragley Beck, in the parish of Ulverston then in Lancashire, now in Cumbria...
, a statesman and geographer of the British Admiralty
Admiralty
The Admiralty was formerly the authority in the Kingdom of England, and later in the United Kingdom, responsible for the command of the Royal Navy...
. The water around it is normally ice-free for only two or three months a year. 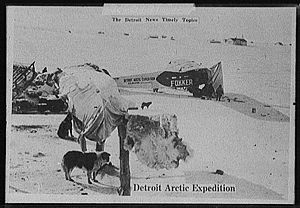 It has been a jumping-off point for many Arctic expeditions, including the Wilkins-Detroit Arctic Expeditions and the April 15, 1928, Eielson-Wilkins flight across the Arctic Ocean to Spitsbergen
Spitsbergen
Spitsbergen is the largest and only permanently populated island of the Svalbard archipelago in Norway. Constituting the western-most bulk of the archipelago, it borders the Arctic Ocean, the Norwegian Sea and the Greenland Sea...
.

It is close to Rogers-Post Site
Rogers-Post Site
The Rogers-Post Site, located on the North Slope of the U.S. state of Alaska, is the location of a plane crash that killed humorist Will Rogers and aviator Wiley Post on 15 August 1935 during an aerial tour of Alaska. It is about 13 miles southwest of Barrow, on the north side of Walakpa Bay near...
, the scene of the airplane crash on August 15, 1935 that killed aviator
Aviator
An aviator is a person who flies an aircraft. The first recorded use of the term was in 1887, as a variation of 'aviation', from the Latin avis , coined in 1863 by G. de la Landelle in Aviation Ou Navigation Aérienne...
Wiley Post
Wiley Post
Wiley Hardeman Post was a famed American aviator, the first pilot to fly solo around the world. Also known for his work in high altitude flying, Post helped develop one of the first pressure suits. His Lockheed Vega aircraft, the Winnie Mae, was on display at the National Air and Space Museum's...
and his passenger, the entertainer Will Rogers
Will Rogers
William "Will" Penn Adair Rogers was an American cowboy, comedian, humorist, social commentator, vaudeville performer, film actor, and one of the world's best-known celebrities in the 1920s and 1930s....
.

Between 1965 and 1972 it was used as a launch site for Nike-Cajun
Nike-Cajun
The Nike-Cajun was a two-stage sounding rocket built by combining a Nike base stage with a Cajun upper stage. It was launched 714 times between 1956 and 1976 and was the most frequently used sounding rocket of the western world...
and Nike Apache
Nike Apache
The Nike Apache was a two-stage sounding rocket used by NASA to loft instruments into the upper atmosphere. The Nike Apache was launched 636 times between 1961 and 1978...
sounding rocket
Sounding rocket
A sounding rocket, sometimes called a research rocket, is an instrument-carrying rocket designed to take measurements and perform scientific experiments during its sub-orbital flight. The origin of the term comes from nautical vocabulary, where to sound is to throw a weighted line from a ship into...
s. It is the site of a Global Atmosphere Watch
Global Atmosphere Watch
The Global Atmosphere Watch is a worldwide system established by the World Meteorological Organization a United Nations agency to monitor trends in the Earth's atmosphere...
atmospheric monitoring station.

The term Point Barrow whales refers to whale
Whale
Whale is the common name for various marine mammals of the order Cetacea. The term whale sometimes refers to all cetaceans, but more often it excludes dolphins and porpoises, which belong to suborder Odontoceti . This suborder also includes the sperm whale, killer whale, pilot whale, and beluga...
s that were trapped in the ice at Point Barrow in 1988, which attracted attention from the public of the United States.