Encyclopedia
The Plymouth Rock, often called simply Rocks or Barred Rocks (after their most popular color), is a chicken
Chicken
The chicken is a domesticated fowl, a subspecies of the Red Junglefowl. As one of the most common and widespread domestic animals, and with a population of more than 24 billion in 2003, there are more chickens in the world than any other species of bird...
breed that originated in the United States
United States
The United States of America is a federal constitutional republic comprising fifty states and a federal district...
. The Plymouth Rock is a dual-purpose, cold-hardy bird and therefore makes a great breed for the small farm or backyard flock owner.
The Barred Rock is often called the Plymouth Rock, but this title correctly belongs to the entire breed, not just the Barred variety.

The Plymouth Rock was developed in New England in the middle of the 19th century and was first exhibited as a breed in 1869. Several individuals claimed its invention, using crosses of Dominiques
Dominiques
The Dominique, also known as Dominicker or Pilgrim Fowl, is a breed of chicken originating in the United States during the Colonial. It is considered America's oldest breed of chicken, probably descending from chickens brought to New England from southern England during colonial times...
, Black Java
Java (chicken)
The Java is a breed of chicken originating in the United States. Despite the breed's name, which comes from the island of Java in Indonesia, it was developed in the U.S. from chickens of unknown Asian extraction. It is one of the oldest American chickens, forming the basis for many other breeds,...
s, Cochin
Cochin (chicken)
The Cochin or Cochin China, originally known as the Chinese Shanghai, is a breed of chicken.The name Cochin came from the original Chinese name 九斤黄, meaning nine jin yellow, erroneously conflated with the then-current names for what are now parts of southern India and Vietnam, where jin is a...
s, and perhaps Malay
Malay (chicken)
The Malay is a breed of chicken originating in Asia, most likely in northern Pakistan . These birds are cousins of Asil. It is unknown why they were called Malay, but perhaps because of a mistake by the former East India Company, when they introduced that exotic new breed around 1570. In Asia, the...
s and Dorking
Dorking (chicken)
The Dorking is a breed of chicken that is believed to have originated in Italy during the period of the Roman Empire and was introduced in Britain at the time of the Roman conquest making it one of the oldest English breeds.-History:...
s. John C. Bennett
John C. Bennett
John Cook Bennett was an American physician and a ranking and influential—but short-lived—leader of the Latter Day Saint movement, who acted as second-in-command to Joseph Smith, Jr., for a brief period in the early 1840s....
(1804–1867) has been credited with either creating or popularizing the breed. Plymouth Rocks were bred as a dual-purpose fowl, meaning that they were valued both for their meat and for the hens' egg-laying ability. The first Plymouth Rock was barred and other varieties were developed later. The breed became popular very rapidly, and in fact, until World War II, no breed was ever kept and bred as extensively in the United States as the Barred Plymouth Rock. Its popularity came from its qualities as an outstanding farm chicken: hardiness, docility, broodiness, and excellent production of both eggs and meat.

Most of the other varieties were developed from crosses containing some of the same ancestral background as the barred variety. Early in its development, the name Plymouth Rock implied a barred bird, but as more varieties were developed, it became the designation for the breed. The Barred Plymouth Rock was one of the foundation breeds for the broiler industry in the 1920s, and the White Rock continues to be used as the female side of the commercial broiler cross. The Barred Plymouth Rock is also raised for genetic hackle used extensively as a material in artificial fly
Artificial fly
An artificial fly or fly lure is a type of fishing lure, usually used in the sport of fly fishing . In general, artificial flies are the bait which fly fishers present to their target species of fish while fly fishing...
construction.

Plymouth Rocks are large, long-lived chickens. Some varieties are good layers while others are bred principally for meat. They possess a long, broad back; a moderately deep, full breast; and yellow skin and legs. The hens have a deep, full abdomen, which is a sign of a good layer. The face of a Plymouth Rock is red with red ear lobes, a bright yellow beak, bay-colored eyes, and a single comb of moderate size. Their feathers are fairly loosely held but not so long as to easily tangle. The chicken's bottom feathers are soft and downy, like baby chicks feathers.

In terms of temperament, both roosters
Roosters
Roosters is a 1993 American dramatic film with a screenplay by Milcha Sanchez-Scott that is adapted from her play of the same name. The film premiered at the Toronto International Film Festival in 1993 before being released in the United States in 1995....
and hens are calm and will get along well with people and other animals such as pets. The hens often will go broody if in the right environment, and are good mothers.

There are eight colours of Plymouth Rocks recognized in most of the world, but in Australia
Australia
Australia , officially the Commonwealth of Australia, is a country in the Southern Hemisphere comprising the mainland of the Australian continent, the island of Tasmania, and numerous smaller islands in the Indian and Pacific Oceans. It is the world's sixth-largest country by total area...
, the barred colour is split in to two separate colours, Dark Barred and Light Barred. The difference between these colours is highly noticeable, with the bars of white colour wider and the grey lighter in the Light Barred, than in Dark Barred.

The list of colours correct for most of the world (Namely the United Kingdom, America and Canada), is the following:

Plymouth Rocks lay a large egg that varies in color from light to medium brown with a touch of pink. The birds continue laying all through the winter with decreased production. The amount of eggs laid are dependent on the strains the birds are from. 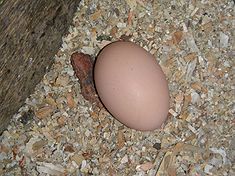 The standard weights for Plymouth Rocks, as established by the American Poultry Association, are as follows: cock - 9-1/2 pounds; hen - 7-1/2 pounds; cockerel - 8 pounds; and pullet - 5-6 pounds.