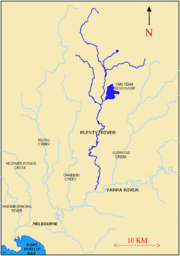 The Plenty River is a tributary of the Yarra River
Yarra River
The Yarra River, originally Birrarung, is a river in east-central Victoria, Australia. The lower stretches of the river is where the city of Melbourne was established in 1835 and today Greater Melbourne dominates and influences the landscape of its lower reaches...
in Victoria
Victoria (Australia)
Victoria is the second most populous state in Australia. Geographically the smallest mainland state, Victoria is bordered by New South Wales, South Australia, and Tasmania on Boundary Islet to the north, west and south respectively....
, Australia
Australia
Australia , officially the Commonwealth of Australia, is a country in the Southern Hemisphere comprising the mainland of the Australian continent, the island of Tasmania, and numerous smaller islands in the Indian and Pacific Oceans. It is the world's sixth-largest country by total area...
. Originating in the forested slopes of Mount Disappointment
Mount Disappointment (Australia)
Mount Disappointment is an mountain, located on the southern end of The Great Dividing Range, north of Melbourne, the state capital of Victoria , Australia...
, the Plenty River is the source of Melbourne
Melbourne
Melbourne is the capital and most populous city in the state of Victoria, and the second most populous city in Australia. The Melbourne City Centre is the hub of the greater metropolitan area and the Census statistical division—of which "Melbourne" is the common name. As of June 2009, the greater...
's first major water supply in the form of the Yan Yean Reservoir
Yan Yean Reservoir
Yan Yean Reservoir is the oldest water supply for the city of Melbourne, Australia. It is built on the Plenty River a tributary of the Yarra River, 30 km north of the city. A 9.5 metre embankment holds back 30,000 megalitres of water...
.