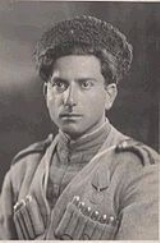 Encyclopedia
A Plastun or plastoon (Ukrainian
Ukrainian language
Ukrainian is a language of the East Slavic subgroup of the Slavic languages. It is the official state language of Ukraine. Written Ukrainian uses a variant of the Cyrillic alphabet....
) was a Cossack
Cossack
Cossacks are a group of predominantly East Slavic people who originally were members of democratic, semi-military communities in what is today Ukraine and Southern Russia inhabiting sparsely populated areas and islands in the lower Dnieper and Don basins and who played an important role in the...
foot scouting
Reconnaissance
Reconnaissance is the military term for exploring beyond the area occupied by friendly forces to gain information about enemy forces or features of the environment....
and sentry military unit. Originally they were part of the Black Sea Cossack Host
Black Sea Cossack Host
Black Sea Cossack Host , also known as Chernomoriya , was a Cossack host of the Russian Empire created in 1787 in the southern Ukraine from former Zaporozhian Cossacks. In the 1790s, the host was re-settled to the Kuban River...
and then later in the 19th and 20th centuries Kuban Cossack Host.

The tradition of foot scouts, vanguard troops and ambushes, together with the term "plastuny", belong to the early Cossack history of the Zaporizhian Sich
Zaporizhian Sich
Zaporizhian Sich was socio-political, grassroot, military organization of Ukrainian cossacks placed beyond Dnieper rapids. Sich existed between the 16th and 18th centuries in the region around the today's Kakhovka Reservoir...
and mentioned, e.g., by Vladimir Dahl in his "Explanatory Dictionary of the Live Great Russian language". Plastun foot units were introduced during the Russian-Circassian War
Russian-Circassian War
The Russian–Circassian War refers to a series of battles and wars in Circassia, the northwestern part of the Caucasus, which were part of the Russian Empire's conquest of the Caucasus lasting approximately 150 years, starting under the reign of Tsar Peter the Great and being completed in 1864...
to guard and scout beyond the "Kuban Line", a frontier in the Kuban
Kuban
Kuban is a geographic region of Southern Russia surrounding the Kuban River, on the Black Sea between the Don Steppe, Volga Delta and the Caucasus...
plains, against sudden Circassian raids.

Later the name "plastoon regiments" was applied to all Cossack infantry
Infantry
Infantrymen are soldiers who are specifically trained for the role of fighting on foot to engage the enemy face to face and have historically borne the brunt of the casualties of combat in wars. As the oldest branch of combat arms, they are the backbone of armies...
. In the Russian Imperial Army, whole plastun regiments were formed. Normally Cossacks had to buy their horses and horse tack
Horse tack
Tack is a term used to describe any of the various equipment and accessories worn by horses in the course of their use as domesticated animals. Saddles, stirrups, bridles, halters, reins, bits, harnesses, martingales, and breastplates are all forms of horse tack...
with their own money, and plastuns did not have these expenses. Despite this, regular plastun units were not popular since they did not fit the traditional notion of Cossack pride. Therefore plastun units tended to consist of poorer people.

The term was revived in the Soviet Army
Soviet Army
The Soviet Army is the name given to the main part of the Armed Forces of the Soviet Union between 1946 and 1992. Previously, it had been known as the Red Army. Informally, Армия referred to all the MOD armed forces, except, in some cases, the Soviet Navy.This article covers the Soviet Ground...
during the Great Patriotic War and used in the names of several Cossack battalion
Battalion
A battalion is a military unit of around 300–1,200 soldiers usually consisting of between two and seven companies and typically commanded by either a Lieutenant Colonel or a Colonel...
s and regiment
Regiment
A regiment is a major tactical military unit, composed of variable numbers of batteries, squadrons or battalions, commanded by a colonel or lieutenant colonel...
s. The only plastun Cossack division of that time was the 9th Krasnodar Plastun Division, which fought in Northern Caucasus, Poland and Czechoslovakia, and was one of the elite Soviet military units. Germans called them "Stalin's cutthroats". At the same time, "plastun" (i.e., infantry) regiments existed in the Cossack military that fought on the German side: in the 15th SS Cossack Cavalry Corps.

The name derives from the word plast, "sheet" via an expression "to lay like a sheet", i.e., flat and low. The word "plastoon" also can refer to a member of a Ukrainian Scouting
Scouting
Scouting, also known as the Scout Movement, is a worldwide youth movement with the stated aim of supporting young people in their physical, mental and spiritual development, that they may play constructive roles in society....
organization Plast
Plast
The Plast National Scout Organization of Ukraine commonly called Ukrainian Plast or simply Plast is the largest Scouting organization in Ukraine.-First Phase: 1911-1920:...
, named after the original plastoons.
The source of this article is wikipedia, the free encyclopedia.  The text of this article is licensed under the GFDL.