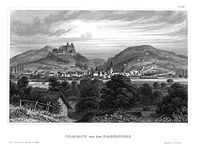 It was destroyed in 1554 at the end of the second Margravian war (1552–1554) of margrave Albert Alcibiades. The Plassenburg was later rebuilt by the architect Caspar Vischer as an impressive stronghold and as a huge palace. In 1792, Margrave Alexander sold the Plassenburg to his cousin, the King of Prussia. A combined Bavarian and French army under the command of Jérôme Bonaparte, brother of Napoleon, besieged the Plassenburg in 1806. In 1810, Kulmbach
Kulmbach (district)
Kulmbach is a district in Bavaria, Germany. It is bounded by the districts of Kronach, Hof, Bayreuth and Lichtenfels.-History:...
became Bavarian and the castle was used as a prison and as a military hospital. During the second world war, the Organisation Todt used the Plassenburg as a training camp and recreation home. Today, it is a museum and a venue for cultural events.

It contains a significant collection of Prussian military artifacts and portraits.

The Plassenburg was first mentioned in 1135, when it was described by Count Berthold II of Andechs as comes de Plassenberch. Presumably he was also the founder of the castle, which was built to the west of an earlier fortified farmstead. To begin with, the castle was a central supporting stronghold for the Meranian rulers of the Upper Main and Franconian Forest.

Gradually, the Plassenburg developed into a new centre of power for the Hohenzollerns. At the time of Burgrave Frederick V of Nuremberg (who reigned 1357–1397), the Plassenburg had already outstripped the Cadolzburg
Cadolzburg
Cadolzburg is a municipality in the district of Fürth, in Bavaria, Germany. It is situated 11 km west of Fürth.In the year 2007 Cadolzburg celebrated its 850th anniversary.- Notable persons :* Albert III, Elector of Brandenburg...
- a traditional burgravial residence. In 1397 Burgrave Frederick V stepped down from the business of government and chose the Plassenburg as his retirement home. The Hohenzollerns' territory in Franconia was divided between his sons, John III and Frederick VI, later to be the Elector of Brandenburg, in accordance with the Dispositio Fridericiana of 1385. Thus the Plassenburg became the centre of power for the so-called Principality of the Mountains (Fürstentum ob dem Gebirg), later the Margraviate of Brandenburg-Kulmbach. After the death of John III in 1420, his estate fell to his brother, Frederick, who, in 1421, created the office of "Captain of the Mountains" to rule his domain. Plassenburg remained the administrative centre of this hilly principality until after the middle of the 16th century.

The internment of the Countess Barbara of Brandenburg in March 1493, began the sad chapter of Plassenburg as a family prison. This reach a peak in February 1515 when Margrave Casimir of Brandenburg locked up his father, Margrave Frederick the Elder of Brandenburg, in a tower room at Plassenburg which he could not leave for 12 years. In 1542 Margrave Albrecht Alcibiades moved the Residenz
Residenz
Residenz is a very formal, otherwise obsolete, German word for "place of living". It is in particular used to denote the building or town where a sovereign ruler resided, therefore also carrying a similar meaning as the modern expressions seat of government or capital...
for the first time from Plassenburg, which continued to serve primarily as a country fortress, to Bayreuth.
The source of this article is wikipedia, the free encyclopedia.  The text of this article is licensed under the GFDL.