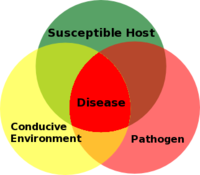 Plant disease forecasting is a management system used to predict the occurrence or change in severity of plant diseases
Phytopathology
Plant pathology is the scientific study of plant diseases caused by pathogens and environmental conditions . Organisms that cause infectious disease include fungi, oomycetes, bacteria, viruses, viroids, virus-like organisms, phytoplasmas, protozoa, nematodes and parasitic plants...
. At the field scale, these systems are used by growers to make economic decisions about disease treatments for control. Often the systems ask the grower a series of questions about the susceptibility of the host crop
Host (biology)
In biology, a host is an organism that harbors a parasite, or a mutual or commensal symbiont, typically providing nourishment and shelter. In botany, a host plant is one that supplies food resources and substrate for certain insects or other fauna...
, and incorporate current and forecast weather
Weather
Weather is the state of the atmosphere, to the degree that it is hot or cold, wet or dry, calm or stormy, clear or cloudy. Most weather phenomena occur in the troposphere, just below the stratosphere. Weather refers, generally, to day-to-day temperature and precipitation activity, whereas climate...
conditions to make a recommendation. Typically a recommendation is made about whether disease treatment is necessary or not. Usually treatment is a pesticide
Pesticide
Pesticides are substances or mixture of substances intended for preventing, destroying, repelling or mitigating any pest.A pesticide may be a chemical unicycle, biological agent , antimicrobial, disinfectant or device used against any pest...
application.

Forecasting systems are based on assumptions about the pathogen's interactions with the host and environment, the disease triangle
Plant disease epidemiology
Plant Disease epidemiology is the study of disease in plant populations. Much like diseases of humans and animals, plant diseases occur due to pathogens such as bacteria, viruses, fungi, oomycetes, nematodes, phytoplasmas, protozoa, and parasitic plants...
. The objective is to accurately predict when the three factors - host, environment, and pathogen - all interact in such a fashion that disease can occur and cause economic losses.

In most cases the host can be suitably defined as resistant
Gene-for-gene relationship
The gene-for-gene relationship was discovered by Harold Henry Flor who was working with rust of flax . Flor was the first scientist to study the genetics of both the host and parasite and to integrate them into one genetic system...
or susceptible, and the presence of the pathogen may often be reasonably ascertained based on previous cropping history or perhaps survey data. The environment is usually the factor that controls whether disease develops or not. Environmental conditions may determine the presence of the pathogen in a particular season through their effects on processes such as overwintering. Environmental conditions also affect the ability of the pathogen to cause disease, e.g. a minimum leaf wetness
Leaf wetness
Leaf wetness is an meteorological parameter that describes the amount of dew and precipitation left on surfaces. It is used for monitoring leaf moisture for agricultural purposes, such as fungus and disease control, for control of irrigation systems, and for detection of fog and dew conditions, and...
duration is required for grey leaf spot of corn to occur. In these cases a disease forecasting system attempts to define when the environment will be conducive to disease development.

Good disease forecasting systems must be reliable, simple, cost-effective and applicable to many diseases. As such they are normally only designed for diseases that are irregular enough to warrant a prediction system, rather than diseases that occur every year for which regular treatment should be employed.Forecasting systems can only be designed if there is also an understanding on the actual disease triangle parameters.

Forecasting systems may use one of several parameters in order to work out disease risk, or a combination of factors. One of the first forecasting systems designed was for Stewart's Wilt
Stewart's Wilt
Stewart's Wilt is a serious bacterial disease of corn caused by the bacterium Pantoea stewartii. This bacterium affects plants, particularly types of maize or corn such as sweet, flint, dent, flower and popcorn. The disease is also known as bacterial wilt or bacterial leaf blight and has shown...
and based on winter temperature index as low temperatures would kill the vector of the disease so there would be no outbreak. An example of a multiple disease/pest forecasting system is the EPIdemiology, PREdiction, and PREvention (EPIPRE) system developed in the Netherlands
Netherlands
The Netherlands is a constituent country of the Kingdom of the Netherlands, located mainly in North-West Europe and with several islands in the Caribbean. Mainland Netherlands borders the North Sea to the north and west, Belgium to the south, and Germany to the east, and shares maritime borders...
for winter wheat
Winter wheat
Winter wheat is a type of wheat that is planted from September to December in the Northern Hemisphere. Winter wheat sprouts before freezing occurs, then becomes dormant until the soil warms in the spring. Winter wheat needs a few weeks of cold before being able to flower, however persistent snow...
that focused on multiple pathogens. USPEST.org graphs risks of various plants diseases based on weather forecasts with hourly resolution of leaf wetness. Forecasting models are often based on a relationship like simple linear regression
Linear regression
In statistics, linear regression is an approach to modeling the relationship between a scalar variable y and one or more explanatory variables denoted X. The case of one explanatory variable is called simple regression...
where x is used to predict y. Other relationships can be modelled using population growth curve
Growth curve
A growth curve is an empirical model of the evolution of a quantity over time. Growth curves are widely used in biology for quantities such as population size, body height or biomass...
s. The growth curve that is used will depend on the nature of the epidemic. Polycyclic epidemics such as potato late blight
Phytophthora infestans
Phytophthora infestans is an oomycete that causes the serious potato disease known as late blight or potato blight. . Late blight was a major culprit in the 1840s European, the 1845 Irish and 1846 Highland potato famines...
are usually best modelled by using the logistic model, whereas monocyclic epidemics may be best modelled using the monomolecular model. Correct choice of a model is essential for a disease forecasting system to be useful.

Plant disease forecasting models must be thoroughly tested and validated after being developed. Interest has arisen lately in model validation through the quantification of the economic costs of false positives and false negatives, where disease prevention measures may be used when unnecessary or not applied when needed respectively. The costs of these two types of errors need to be weighed carefully before deciding to use a disease forecasting system.

In the future, disease forecasting systems may become more useful as computing power increases and the amount of data that is available to plant pathologists to construct models increases. Good forecasting systems also may become increasingly important with climate change
Climate change
Climate change is a significant and lasting change in the statistical distribution of weather patterns over periods ranging from decades to millions of years. It may be a change in average weather conditions or the distribution of events around that average...
. It will be important to be able to accurately predict where disease outbreaks may occur, since they may not be in the historically known areas.
The source of this article is wikipedia, the free encyclopedia.  The text of this article is licensed under the GFDL.