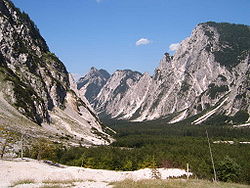 Planica is an alpine
Alps
The Alps is one of the great mountain range systems of Europe, stretching from Austria and Slovenia in the east through Italy, Switzerland, Liechtenstein and Germany to France in the west....
valley
Valley
In geology, a valley or dale is a depression with predominant extent in one direction. A very deep river valley may be called a canyon or gorge.The terms U-shaped and V-shaped are descriptive terms of geography to characterize the form of valleys...
in northwestern Slovenia
Slovenia
Slovenia , officially the Republic of Slovenia , is a country in Central and Southeastern Europe touching the Alps and bordering the Mediterranean. Slovenia borders Italy to the west, Croatia to the south and east, Hungary to the northeast, and Austria to the north, and also has a small portion of...
, extending south from the border village of Rateče
Ratece
-External links:** *...
, not far from another well-known ski resort, Kranjska Gora
Kranjska Gora
Kranjska Gora is a town and a municipality on the Sava Dolinka River in the Upper Carniola region of northwest Slovenia, close to the Austrian and Italian borders.Kranjska Gora is best known as a winter sports town, being situated in the Julian Alps...
. Further south, the valley extends into the Tamar Valley, a popular hiking destination in Triglav National Park
Triglav National Park
Triglav National Park is a national park located in Slovenia and the only one in the country. It was named after Mount Triglav, the highest peak of the Julian Alps and a symbol of Slovenia and Slovenian character....
.

Planica is famous for ski jumping
Ski jumping
Ski jumping is a sport in which skiers go down a take-off ramp, jump and attempt to land as far as possible down the hill below. In addition to the length of the jump, judges give points for style. The skis used for ski jumping are wide and long...
. The first ski jumping hill was constructed before 1930 at the slope of Mount Ponca. In 1934, Stanko Bloudek
Stanko Bloudek
Stanko Bloudek was a Slovenian aeroplane and automobile designer, a sportsman and a sport inventor, designer, builder and educator.- Biography :...
built a larger hill, known as the "Bloudek Giant". The first ski jump over 100 m was achieved here in 1936 by the Austria
Austria
Austria , officially the Republic of Austria , is a landlocked country of roughly 8.4 million people in Central Europe. It is bordered by the Czech Republic and Germany to the north, Slovakia and Hungary to the east, Slovenia and Italy to the south, and Switzerland and Liechtenstein to the...
n Sepp Bradl. At the time, this was the biggest jumping hill in the world, sometimes called "the mother of all jumping hills."

In 1969, a new K-185 hill, Letalnica Bratov Gorišek, was built by Lado and Janez Gorišek
Janez Gorišek
Janez Gorišek is a Slovenian civil engineer, constructor and architect, who holds a degree from the Faculty of Civil Engineering and Geodesy at the University of Ljubljana...
. Between 1985, when Matti Nykänen
Matti Nykänen
Matti Ensio Nykänen is a Finnish former ski jumper who won five Olympic medals , nine World Championships medals and 22 Finnish Championships medals . Most notably, Nykänen won three gold medals at the 1988 Winter Olympics, becoming, along with Yvonne van Gennip of the Netherlands, the most...
flew 191 m, and 2011, new world records have always been set at Planica rather than any other ski jumping hill (e.g., Kulm
Kulm
The name Kulm is a German language toponym which is derived from the Latin culmen, meaning hill. It may be used as follows:-Places:Austria* Kulm bei Weiz, a municipality in Styria* Kulm am Zirbitz, a municipality in Styria...
in Austria
Austria
Austria , officially the Republic of Austria , is a landlocked country of roughly 8.4 million people in Central Europe. It is bordered by the Czech Republic and Germany to the north, Slovakia and Hungary to the east, Slovenia and Italy to the south, and Switzerland and Liechtenstein to the...
, Harrachov
Harrachov
Harrachov is a town on the Mumlava river in the northern Czech Republic, 300 m from the border with Poland. It is within the Krkonoše mountain range, about above sea level.-History:...
in the Czech Republic
Czech Republic
The Czech Republic is a landlocked country in Central Europe. The country is bordered by Poland to the northeast, Slovakia to the east, Austria to the south, and Germany to the west and northwest....
, Oberstdorf
Oberstdorf
Oberstdorf is a municipality and skiing and hiking town in southwest Germany, located in the Allgäu region of the Bavarian Alps.At the center of Oberstdorf is a church whose tall spire serves as a landmark for navigating around town. The summits of the Nebelhorn and Fellhorn provide...
in Germany
Germany
Germany , officially the Federal Republic of Germany , is a federal parliamentary republic in Europe. The country consists of 16 states while the capital and largest city is Berlin. Germany covers an area of 357,021 km2 and has a largely temperate seasonal climate...
, or Vikersundbakken
Vikersundbakken
Vikersundbakken is the only ski flying hill in the Nordic countries. With a hill and world record of 246,5 meters, Vikersundbakken is the world's largest ski jumping hill....
in Norway
Norway
Norway , officially the Kingdom of Norway, is a Nordic unitary constitutional monarchy whose territory comprises the western portion of the Scandinavian Peninsula, Jan Mayen, and the Arctic archipelago of Svalbard and Bouvet Island. Norway has a total area of and a population of about 4.9 million...
). After it's 2010 rebuilding, Vikersundbakken is the biggest hill in the world, and the current world record is set there.

In 1994, Toni Nieminen
Toni Nieminen
Toni Nieminen is a Finnish ski-jumper who competed from 1991 to 2004.His biggest success came very early in his career at the age of 16, where he won three medals at the 1992 Winter Olympics in Albertville, earning two gold medals in the individual and team large hill events; and a bronze medal in...
of Finland
Finland
Finland , officially the Republic of Finland, is a Nordic country situated in the Fennoscandian region of Northern Europe. It is bordered by Sweden in the west, Norway in the north and Russia in the east, while Estonia lies to its south across the Gulf of Finland.Around 5.4 million people reside...
was the first ski jumper in history to jump over 200 m. The hill record is 239 m, set by Bjørn Einar Romøren
Bjørn Einar Romøren
Bjørn Einar Romøren is a Norwegian ski jumper representing Øvrevoll Hosle IL in Bærum.His first World Cup victory came in Bischofshofen, Austria during the Four Hills Tournament in January 2003. He has later won several World Cup competitions as well as two FIS Nordic World Ski Championships...
of Norway
Norway
Norway , officially the Kingdom of Norway, is a Nordic unitary constitutional monarchy whose territory comprises the western portion of the Scandinavian Peninsula, Jan Mayen, and the Arctic archipelago of Svalbard and Bouvet Island. Norway has a total area of and a population of about 4.9 million...
in March 2005.