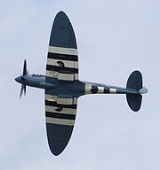 Encyclopedia
In aviation
Aviation
Aviation is the design, development, production, operation, and use of aircraft, especially heavier-than-air aircraft. Aviation is derived from avis, the Latin word for bird.-History:...
, a planform is the shape and layout of a fixed-wing aircraft
Fixed-wing aircraft
A fixed-wing aircraft is an aircraft capable of flight using wings that generate lift due to the vehicle's forward airspeed. Fixed-wing aircraft are distinct from rotary-wing aircraft in which wings rotate about a fixed mast and ornithopters in which lift is generated by flapping wings.A powered...
's fuselage and wing. Of all the myriad planforms used, they can typically be grouped into those used for low-speed flight, found on general aviation
General aviation
General aviation is one of the two categories of civil aviation. It refers to all flights other than military and scheduled airline and regular cargo flights, both private and commercial. General aviation flights range from gliders and powered parachutes to large, non-scheduled cargo jet flights...
aircraft, and those used for high-speed flight
High-speed flight
In high-speed flight the assumptions of incompressibility of the air used in low-speed aerodynamics no longer apply. In subsonic aerodynamics, the theory of lift is based upon the forces generated on a body and a moving gas in which it is immersed...
, found on many military aircraft
Military aircraft
A military aircraft is any fixed-wing or rotary-wing aircraft that is operated by a legal or insurrectionary armed service of any type. Military aircraft can be either combat or non-combat:...
and airliner
Airliner
An airliner is a large fixed-wing aircraft for transporting passengers and cargo. Such aircraft are operated by airlines. Although the definition of an airliner can vary from country to country, an airliner is typically defined as an aircraft intended for carrying multiple passengers in commercial...
s. 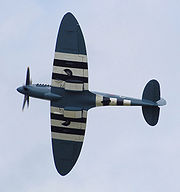 The primary concern in low speed flight is the aspect ratio
Aspect ratio (wing)
In aerodynamics, the aspect ratio of a wing is essentially the ratio of its length to its breadth . A high aspect ratio indicates long, narrow wings, whereas a low aspect ratio indicates short, stubby wings....
, the comparison of the length of the wing measured out from the fuselage
Fuselage
The fuselage is an aircraft's main body section that holds crew and passengers or cargo. In single-engine aircraft it will usually contain an engine, although in some amphibious aircraft the single engine is mounted on a pylon attached to the fuselage which in turn is used as a floating hull...
, wingspan
Wingspan
The wingspan of an airplane or a bird, is the distance from one wingtip to the other wingtip. For example, the Boeing 777 has a wingspan of about ; and a Wandering Albatross caught in 1965 had a wingspan of , the official record for a living bird.The term wingspan, more technically extent, is...
, compared to the length from front to back, chord
Chord (aircraft)
In aeronautics, chord refers to the imaginary straight line joining the trailing edge and the center of curvature of the leading edge of the cross-section of an airfoil...
. Wings with higher aspect ratios, that is, wings that are longer and skinnier, have lower drag
Drag (physics)
In fluid dynamics, drag refers to forces which act on a solid object in the direction of the relative fluid flow velocity...
for any given amount of lift
Lift (force)
A fluid flowing past the surface of a body exerts a surface force on it. Lift is the component of this force that is perpendicular to the oncoming flow direction. It contrasts with the drag force, which is the component of the surface force parallel to the flow direction...
than a wing of the same area that is shorter and fatter. This is due to an effect known as induced drag, caused by airflow around the tip of the wing. As the size of the tip decreases compared to the wing's overall size, the magnitude of the induced drag is reduced.

This is why designers of gliders
Glider (sailplane)
A glider or sailplane is a type of glider aircraft used in the sport of gliding. Some gliders, known as motor gliders are used for gliding and soaring as well, but have engines which can, in some cases, be used for take-off or for extending a flight...
, who want a high lift to drag ratio, use very long and skinny high aspect ratio wings and winglets. At higher speeds, however, different forms of drag become more prominent, meaning that the large aspect ratio wings found on gliders become very inefficient. Another issue is strength; it is harder to build a longer wing with sufficient stiffness than a short one.

There are other ways to reduce induced drag, mostly by changing the shape of the wing to reduce the size of the tip. The elliptical wing
Elliptical wing
An elliptical wing is a wing planform shape that minimizes induced drag. Elliptical taper shortens the chord near the wingtips in such a way that all parts of the wing experience equivalent downwash, and lift at the wing tips is essentially zero, improving aerodynamic efficiency due to a greater...
found on the Supermarine Spitfire
Supermarine Spitfire
The Supermarine Spitfire is a British single-seat fighter aircraft that was used by the Royal Air Force and many other Allied countries throughout the Second World War. The Spitfire continued to be used as a front line fighter and in secondary roles into the 1950s...
and Republic P-47 is the most efficient, but difficult to build. A practical compromise is to taper the wing towards the tip, a feature that can be found on almost all modern aircraft (including gliders).

At higher speeds nearing the speed of sound
Speed of sound
The speed of sound is the distance travelled during a unit of time by a sound wave propagating through an elastic medium. In dry air at , the speed of sound is . This is , or about one kilometer in three seconds or approximately one mile in five seconds....
, a new form of drag appears: wave drag
Wave drag
In aeronautics, wave drag is a component of the drag on aircraft, blade tips and projectiles moving at transonic and supersonic speeds, due to the presence of shock waves. Wave drag is independent of viscous effects.- Overview :...
. Wave drag is considerably more powerful than induced drag, and must be avoided at all costs to improve performance. Doing so demands a wing that is as thin as possible, with a slowly changing profile over a wide chord. Of course, this is basically the opposite goal to low speed wings, which presents a problem.

Just as on the lower speed designs, making an ideal high speed planform is difficult for practical reasons. In this case, a very thin wing makes it difficult to use the internal room to store fuel and landing gear, makes the wing far less stiff torsionally, and causes increased induced drag when flying slower.

Solutions to this problem come in many forms, notably the use of the swept wing
Swept wing
A swept wing is a wing planform favored for high subsonic jet speeds first investigated by Germany during the Second World War. Since the introduction of the MiG-15 and North American F-86 which demonstrated a decisive superiority over the slower first generation of straight-wing jet fighters...
and delta wing
Delta wing
The delta wing is a wing planform in the form of a triangle. It is named for its similarity in shape to the Greek uppercase letter delta .-Delta-shaped stabilizers:...
, both of which avoid the shock wave
Shock wave
A shock wave is a type of propagating disturbance. Like an ordinary wave, it carries energy and can propagate through a medium or in some cases in the absence of a material medium, through a field such as the electromagnetic field...
at the leading edge. Other designs make the wing as thin as possible, leading to designs like the F-104 Starfighter
F-104 Starfighter
The Lockheed F-104 Starfighter is a single-engine, high-performance, supersonic interceptor aircraft originally developed for the United States Air Force by Lockheed. One of the Century Series of aircraft, it served with the USAF from 1958 until 1969, and continued with Air National Guard units...
.
The source of this article is wikipedia, the free encyclopedia.  The text of this article is licensed under the GFDL.