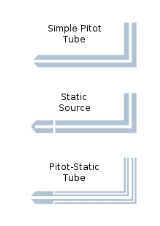 Overview
A pitot tube is a pressure measurement
Pressure measurement
Many techniques have been developed for the measurement of pressure and vacuum. Instruments used to measure pressure are called pressure gauges or vacuum gauges....
instrument used to measure fluid
Fluid
In physics, a fluid is a substance that continually deforms under an applied shear stress. Fluids are a subset of the phases of matter and include liquids, gases, plasmas and, to some extent, plastic solids....
flow velocity
Velocity
In physics, velocity is speed in a given direction. Speed describes only how fast an object is moving, whereas velocity gives both the speed and direction of the object's motion. To have a constant velocity, an object must have a constant speed and motion in a constant direction. Constant ...
. The pitot tube was invented by the French
France
The French Republic , The French Republic , The French Republic , (commonly known as France , is a unitary semi-presidential republic in Western Europe with several overseas territories and islands located on other continents and in the Indian, Pacific, and Atlantic oceans. Metropolitan France...
engineer Henri Pitot Ulo in the early 18th century and was modified to its modern form in the mid-19th century by French scientist Henry Darcy
Henry Darcy
Henry Philibert Gaspard Darcy was a French engineer who made several important contributions to hydraulics.-Biography:...
. It is widely used to determine the airspeed
Airspeed
Airspeed is the speed of an aircraft relative to the air. Among the common conventions for qualifying airspeed are: indicated airspeed , calibrated airspeed , true airspeed , equivalent airspeed and density airspeed....
of an aircraft
Aircraft
An aircraft is a vehicle that is able to fly by gaining support from the air, or, in general, the atmosphere of a planet. An aircraft counters the force of gravity by using either static lift or by using the dynamic lift of an airfoil, or in a few cases the downward thrust from jet engines.Although...
and to measure air and gas velocities in industrial applications. The pitot tube is used to measure the local velocity at a given point in the flow stream and not the average velocity in the pipe or conduit.
The basic pitot tube consists of a tube pointing directly into the fluid flow.