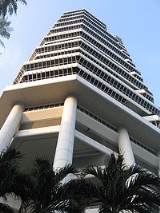 In modern architecture, pilotis are ground-level supporting columns. A prime example is Le Corbusier
Le Corbusier
Charles-Édouard Jeanneret, better known as Le Corbusier , was a Swiss-born French architect, designer, urbanist, writer and painter, famous for being one of the pioneers of what now is called modern architecture. He was born in Switzerland and became a French citizen in 1930...
's Villa Savoye
Villa Savoye
Villa Savoye is a modernist villa in Poissy, in the outskirts of Paris, France. It was designed by Swiss architects Le Corbusier and his cousin, Pierre Jeanneret, and built between 1928 and 1931....
in Poissy, France
Poissy
Poissy is a commune in the Yvelines department in the Île-de-France in north-central France. It is located in the western suburbs of Paris from the center.In 1561 it was the site of a fruitless Catholic-Huguenot conference, the Colloquy at Poissy...
. Another is Patrick Gwynne
Patrick Gwynne
Patrick Gwynne was a British modernist architect with Welsh roots, best known for designing and building The Homewood, which he left to the National Trust in 2003.-Early life and work:...
's The Homewood
The Homewood
The Homewood is a modernist house in Esher, Surrey, England. Designed by architect Patrick Gwynne for his parents, The Homewood was given by Gwynne to the National Trust in 1999.-Origins:...
in Surrey
Surrey
Surrey is a county in the South East of England and is one of the Home Counties. The county borders Greater London, Kent, East Sussex, West Sussex, Hampshire and Berkshire. The historic county town is Guildford. Surrey County Council sits at Kingston upon Thames, although this has been part of...
, England
England
England is a country that is part of the United Kingdom. It shares land borders with Scotland to the north and Wales to the west; the Irish Sea is to the north west, the Celtic Sea to the south west, with the North Sea to the east and the English Channel to the south separating it from continental...
.

Beyond their support function, the pilotis (or piers) raise the architectural volume, lighten it and free a space for circulation under the construction. They refine a building's connectivity with the land by allowing for parking, garden or driveway below while allowing a sense of floating and lightness in the architecture itself. In hurricane-prone areas, pilotis may be used to raise the inhabited space of a building above typical storm surge levels.

Le Corbusier used them in a variety of forms from slender posts to the massive brutalist
Brutalist architecture
Brutalist architecture is a style of architecture which flourished from the 1950s to the mid 1970s, spawned from the modernist architectural movement.-The term "brutalism":...
look of the Marseilles Housing Unit
Unité d'Habitation
The Unité d'Habitation is the name of a modernist residential housing design principle developed by Le Corbusier, with the collaboration of painter-architect Nadir Afonso...
(1945–1952) with a range of bases, inclusions and surfaces. This was part of Le Corbusier's idea of machine-like efficiency where land, people and buildings would work together optimally.
The source of this article is wikipedia, the free encyclopedia.  The text of this article is licensed under the GFDL.