Encyclopedia
Physical security describes measures that are designed to deny access to unauthorized personnel (including attackers or even accidental intruders) from physically accessing a building, facility, resource, or stored information; and guidance on how to design structures to resist potentially hostile acts. Physical security can be as simple as a locked
Lock (device)
A lock is a mechanical or electronic fastening device that is released by a physical object or secret information , or combination of more than one of these....
door or as elaborate as multiple layers of barriers, armed security guard
Security guard
A security guard is a person who is paid to protect property, assets, or people. Security guards are usually privately and formally employed personnel...
s and guardhouse
Guardhouse
A guardhouse is a building used to house personnel and security equipment...
placement.

Good physical security uses the concept of defense in depth, in appropriate combinations to deter and delay intrusions (passive defense), and detect and respond to intrusions (active defense). Ultimately it should be too difficult, risky
Risk
Risk is the potential that a chosen action or activity will lead to a loss . The notion implies that a choice having an influence on the outcome exists . Potential losses themselves may also be called "risks"...
or costly to an attacker to even attempt an intrusion. However, strong security measures also come at a cost, and there can be no perfect security.

It is up to a security designer to balance security features and a tolerable amount of personnel access against available resources, risks to assets to be protected, and even aesthetics
Aesthetics
Aesthetics is a branch of philosophy dealing with the nature of beauty, art, and taste, and with the creation and appreciation of beauty. It is more scientifically defined as the study of sensory or sensori-emotional values, sometimes called judgments of sentiment and taste...
. There are also life-cycle sustaining costs to consider.

... to intrusions into critical physical spaces. The first two actions of deter and delay are considered passive defense, while the remaining are active in nature.

In a well designed system, these features must complement each other. There are at least four layers of physical security:

There may be many choices to consider and there is no "best" solution that will satisfy a broad class of situations. Each situation is unique. What is offered in this article are only proven techniques, but not always required or expected, or satisfactory for the end user.

The goal of physical security is to convince potential attackers that the likely costs of attack exceeds the value of making the attack, e.g. that consequences of a failed attack may well exceed the gain. The combination of layered security features establishes the presence of territoriality.

The next layer is mechanical and includes gates, doors, and locks. Key control of the locks becomes a problem with large user populations and any user turnover. Keys quickly become unmanageable, often forcing the adoption of electronic access control. Electronic access control
Access control
Access control refers to exerting control over who can interact with a resource. Often but not always, this involves an authority, who does the controlling. The resource can be a given building, group of buildings, or computer-based information system...
easily manages large user populations, controlling for user lifecycles times, dates, and individual access points.

For example a user's access rights could allow access from 0700h to 1900h Monday through Friday and expires in 90 days. Another form of access control (procedural) includes the use of policies, processes and procedures to manage the ingress into the restricted area. An example of this is the deployment of security personnel conducting checks for authorized entry at predetermined points of entry. This form of access control is usually supplemented by the earlier forms of access control (i.e. mechanical and electronic access control), or simple devices such as physical passes.

An additional sub-layer of mechanical/electronic access control protection is reached by integrating a key management
Key management
Key management is the provisions made in a cryptography system design that are related to generation, exchange, storage, safeguarding, use, vetting, and replacement of keys. It includes cryptographic protocol design, key servers, user procedures, and other relevant protocols.Key management concerns...
system to manage the possession and usage of mechanical keys to locks or property within a building or campus.

In many jurisdictions, law enforcement will not respond to alarms from intrusion detection systems. For example, a motion sensor near a door could trigger on either a person or a squirrel. The sensor itself does not do identification and as far as it is designed, anything moving near that door is unauthorized.

The last layer is video monitoring systems. Security cameras can be a deterrent in many cases, but their real power comes from incident verification and historical analysis. For example, if alarms are being generated and there is a camera in place, the camera could be viewed to verify the alarms. In instances when an attack has already occurred and a camera is in place at the point of attack, the recorded video can be reviewed. Although the term closed-circuit television
Closed-circuit television
Closed-circuit television is the use of video cameras to transmit a signal to a specific place, on a limited set of monitors....
(CCTV) is common, it is quickly becoming outdated as more video systems lose the closed circuit for signal transmission and are instead transmitting on computer networks.

Advances in information technology are transforming video monitoring into video analysis. For instance, once an image is digitized it can become data that sophisticated algorithms can act upon. As the speed and accuracy of automated analysis increases, the video system could move from a monitoring system to an intrusion detection system or access control system. It is not a stretch to imagine a video camera inputting data to a processor that outputs to a door lock. Instead of using some kind of key, whether mechanical or electrical, a person's visage is the key. FST21, an Israeli company that entered the US market this year, markets intelligent buildings that do just that. When actual design and implementation is considered, there are numerous types of security cameras that can be used for many different applications. One must analyze their needs and choose accordingly.

Note that video monitoring does not necessarily guarantee that a human response is made to an intrusion. A human must be monitoring the situation realtime in order to respond in a timely manner. Otherwise, video monitoring is simply a means to gather evidence to be analyzed at a later time - perhaps too late in some cases.

Intertwined in these four layers are people. Guards have a role in all layers, in the first as patrols and at checkpoints. In the second to administer electronic access control. In the third to respond to alarms. The response force must be able to arrive on site in less time than it is expected that the attacker will require to breach the barriers. And in the fourth to monitor and analyze video. Users obviously have a role also by questioning and reporting suspicious people. Aiding in identifying people as known versus unknown are identification systems. Often photo ID badges are used and are frequently coupled to the electronic access control system. Visitors are often required to wear a visitor badge.

New developments in information and communications technology, as well as new demands on security managers, have widened the scope of physical security apparatus.

Fire alarm systems are increasingly becoming based on Internet Protocol
Internet Protocol
The Internet Protocol is the principal communications protocol used for relaying datagrams across an internetwork using the Internet Protocol Suite...
, thus leading to them being accessible via local
Local area network
A local area network is a computer network that interconnects computers in a limited area such as a home, school, computer laboratory, or office building...
and wide area network
Wide area network
A wide area network is a telecommunication network that covers a broad area . Business and government entities utilize WANs to relay data among employees, clients, buyers, and suppliers from various geographical locations...
s within organisations. Emergency notification is now a new standard in many industries, as well as physical security information management
Physical Security Information Management
Physical security information management is a category of software that provides a platform and applications created by middleware developers, designed to integrate multiple unconnected security applications and devices and control them through one comprehensive user interface...
(PSIM). A PSIM application integrates all physical security systems in a facility, and provides a single and comprehensive means of managing all of these resources. It consequently saves on time and cost in the effectual management of physical security. 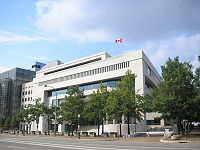 Many installations, serving a myriad of different purposes, have physical obstacles in place to deter intrusion. This can be high walls, barbed wire, glass mounted on top of walls, etc.

The presence of PIR-based motion detectors are common in many places, as a means of noting intrusion into a physical installation. Moreover, VSS/CCTV cameras are becoming increasingly common, as a means of identifying persons who intrude into physical locations.

ATMs (cash dispensers) are protected, not by making them invulnerable, but by spoiling the money inside when they are attacked. Money tainted with a dye could act as a flag to the money's unlawful acquisition.

Safes are rated in terms of the time in minutes which a skilled, well equipped safe-breaker is expected to require to open the safe. These ratings are developed by highly skilled safe breakers employed by insurance agencies, such as Underwriters Laboratories
Underwriters Laboratories
Underwriters Laboratories Inc. is an independent product safety certification organization. Established in 1894, the company has its headquarters in Northbrook, Illinois. UL develops standards and test procedures for products, materials, components, assemblies, tools and equipment, chiefly dealing...
. In a properly designed system, either the time between inspections by a patrolling guard should be less than that time, or an alarm response force should be able to reach it in less than that time.

Hiding the resources, or hiding the fact that resources are valuable, is also often a good idea as it will reduce the exposure to opponents and will cause further delays during an attack, but should not be relied upon as a principal means of ensuring security. (See security through obscurity
Security through obscurity
Security through obscurity is a pejorative referring to a principle in security engineering, which attempts to use secrecy of design or implementation to provide security...
and inside job
Inside job
Inside job refers to a crime committed by a person with a position of trust, such as insider trading.Inside job may also refer to:* Inside Job , a 2005 novella by Connie Willis* Inside Job , a 2000 studio album by Don Henley...
.)

Not all aspects of Physical Security need be high tech. Even something as simple as a thick or thorny bush can add a layer of physical security to some premises, especially in a residential setting.