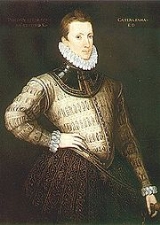 Overview
Sir Philip Sidney was an English poet, courtier and soldier, and is remembered as one of the most prominent figures of the Elizabethan Age
Elizabethan era
The Elizabethan era was the epoch in English history of Queen Elizabeth I's reign . Historians often depict it as the golden age in English history...
. His works include Astrophel and Stella
Astrophel and Stella
Likely composed in the 1580s, Philip Sidney's Astrophel and Stella is an English sonnet sequence containing 108 sonnets and 11 songs. The name derives from the two Greek words, 'aster' and 'phil' , and the Latin word 'stella' meaning star. Thus Astrophel is the star lover, and Stella is his star...
, The Defence of Poetry (also known as The Defence of Poesy or An Apology for Poetry
An Apology for Poetry
Sir Philip Sidney wrote An Apology for Poetry in approximately 1579, and it was published in 1595, after his death....
), and The Countess of Pembroke's Arcadia.
Born at Penshurst Place
Penshurst Place
Penshurst Place is a historic building near Tonbridge, Kent, south east of London, England. It is the ancestral home of the Sidney family, and was the birthplace of the great Elizabethan poet, courtier and soldier, Sir Philip Sidney. The original medieval house is one of the most complete examples...
, Kent, he was the eldest son of Sir Henry Sidney
Henry Sidney
Sir Henry Sidney , Lord Deputy of Ireland was the eldest son of Sir William Sidney of Penshurst, a prominent politician and courtier during the reigns of Henry VIII and Edward VI, from both of whom he received extensive grants of land, including the manor of Penshurst in Kent, which became the...
and Lady Mary Dudley
Mary Dudley, Lady Sidney
Mary Sidney , Lady Sidney was an English lady-in-waiting at the court of Elizabeth I, and the mother of the courtier and poet Sir Philip Sidney...
. His mother was the eldest daughter of John Dudley, 1st Duke of Northumberland
John Dudley, 1st Duke of Northumberland
John Dudley, 1st Duke of Northumberland, KG was an English general, admiral, and politician, who led the government of the young King Edward VI from 1550 until 1553, and unsuccessfully tried to install Lady Jane Grey on the English throne after the King's death...
, and the sister of Robert Dudley, 1st Earl of Leicester
Robert Dudley, 1st Earl of Leicester
Robert Dudley, 1st Earl of Leicester, KG was an English nobleman and the favourite and close friend of Elizabeth I from her first year on the throne until his death...
.

What are the main points in Sir Philip Sidney's the defence of poesy?
More
x