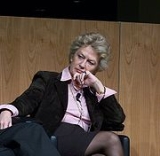 Encyclopedia
Petra Roth is a German
Germany
Germany , officially the Federal Republic of Germany , is a federal parliamentary republic in Europe. The country consists of 16 states while the capital and largest city is Berlin. Germany covers an area of 357,021 km2 and has a largely temperate seasonal climate...
politician of the Christian Democratic Union
Christian Democratic Union (Germany)
The Christian Democratic Union of Germany is a Christian democratic and conservative political party in Germany. It is regarded as on the centre-right of the German political spectrum...
(CDU). Since 1995 she is mayor of Frankfurt
Frankfurt
Frankfurt am Main , commonly known simply as Frankfurt, is the largest city in the German state of Hesse and the fifth-largest city in Germany, with a 2010 population of 688,249. The urban area had an estimated population of 2,300,000 in 2010...
. In addition and in a rerun she is president of Deutscher Städtetag since 2009 which is the head organisation and lobby group of all German cities obverse the Cabinet of Germany
Cabinet of Germany
The Cabinet of Germany is the chief executive body of the Federal Republic of Germany. It consists of the Chancellor and the cabinet ministers. The fundamentals of the cabinet's organization are set down in articles 62 to 69 of the Basic Law.-Nomination:...
, the German Bundestag
Bundestag
The Bundestag is a federal legislative body in Germany. In practice Germany is governed by a bicameral legislature, of which the Bundestag serves as the lower house and the Bundesrat the upper house. The Bundestag is established by the German Basic Law of 1949, as the successor to the earlier...
, the Bundesrat of Germany
Bundesrat of Germany
The German Bundesrat is a legislative body that represents the sixteen Länder of Germany at the federal level...
, the European Union
European Union
The European Union is an economic and political union of 27 independent member states which are located primarily in Europe. The EU traces its origins from the European Coal and Steel Community and the European Economic Community , formed by six countries in 1958...
(EU) and many organisations.

Petra Roth descends from a Bremen-based family of merchants. After she left the musically affected Kippenberg-Gymnasium with a General Certificate of Secondary Education she performed an apprenticeship as a medical secretary. Later she passed her exam at an upper business school. Love led her from Bremen to Frankfurt. She is described as art-interested. She has two sons and is widowed since 1994.

Petra Roth joined the Christian Democratic Union in 1972 after she had moved to Frankfurt. Later she was elected to the local city council and between 1987 and 1995, to the Parliament of Hesse
Hesse
Hesse or Hessia is both a cultural region of Germany and the name of an individual German state.* The cultural region of Hesse includes both the State of Hesse and the area known as Rhenish Hesse in the neighbouring Rhineland-Palatinate state...
. Between 1992 and 1995 she was chairman of the CDU Frankfurt.

On 25 June 1995, Petra Roth was elected mayor of Frankfurt, defeating the incumbent Andreas von Schoeler and becoming the first directly elected woman mayor of the city.

Roth is counted as part of the left wing within the CDU because of her point of view regarding topics like the erection of mosques in Germany, migration and integration, and drug politics.

Roth is member of the board of Frankfurt International Airport Fraport
Fraport
Fraport AG Frankfurt Airport Services Worldwide is a German transport company which operates the Frankfurt International Airport serving Frankfurt am Main and holds interests in the operation of several other airports around the world. In the past the firm also managed the smaller Frankfurt-Hahn...
, chairman of the supervisory board of Frankfurt fair Messe Frankfurt, of municipal utility company Stadtwerke Frankfurt am Main, of regional transportation services Rhein-Main-Verkehrsverbund, and regional housing society ABG Frankfurt Holding.

In 2001, for her activity in the service of the Franco-German cooperation
Franco-German cooperation
The relations between France and Germany is embodied in a cooperation called Franco-German Friendship . This came about after 1945, when a French-German enmity between the two countries ended....
, she received the Légion d'honneur
Légion d'honneur
The Legion of Honour, or in full the National Order of the Legion of Honour is a French order established by Napoleon Bonaparte, First Consul of the Consulat which succeeded to the First Republic, on 19 May 1802...
order, Officier class.