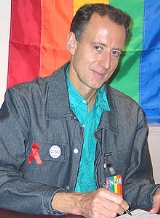 Overview
Peter Gary Tatchell is an Australia
Australia
Australia , officially the Commonwealth of Australia, is a country in the Southern Hemisphere comprising the mainland of the Australian continent, the island of Tasmania, and numerous smaller islands in the Indian and Pacific Oceans. It is the world's sixth-largest country by total area...
n-born British
United Kingdom
The United Kingdom of Great Britain and Northern IrelandIn the United Kingdom and Dependencies, other languages have been officially recognised as legitimate autochthonous languages under the European Charter for Regional or Minority Languages...
political campaigner best known for his work with LGBT social movements
LGBT social movements
Lesbian, gay, bisexual, and transgender social movements share inter-related goals of social acceptance of sexual and gender minorities. Lesbian, gay, bisexual, and transgender people and their allies have a long history of campaigning for what is generally called LGBT rights, also called gay...
. He attracted international attention when he attempted a citizen's arrest
Citizen's arrest
A citizen's arrest is an arrest made by a person who is not acting as a sworn law-enforcement official. In common law jurisdictions, the practice dates back to medieval Britain and the English common law, in which sheriffs encouraged ordinary citizens to help apprehend law breakers.Despite the...
of Zimbabwean President Robert Mugabe
Robert Mugabe
Robert Gabriel Mugabe is the President of Zimbabwe. As one of the leaders of the liberation movement against white-minority rule, he was elected into power in 1980...
in 1999 and again in 2001.