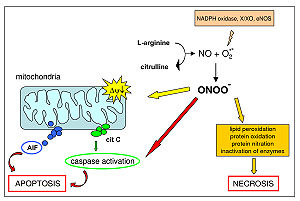 Peroxynitrite is the anion with the formula ONOO−. It is an unstable structural isomer of nitrate
Nitrate
The nitrate ion is a polyatomic ion with the molecular formula NO and a molecular mass of 62.0049 g/mol. It is the conjugate base of nitric acid, consisting of one central nitrogen atom surrounded by three identically-bonded oxygen atoms in a trigonal planar arrangement. The nitrate ion carries a...
, NO3−, which has the same formula but a different structure. Although peroxynitrous acid is highly reactive, its conjugate base peroxynitrite is stable in basic solution. It is prepared by the reaction of hydrogen peroxide
Hydrogen peroxide
Hydrogen peroxide is the simplest peroxide and an oxidizer. Hydrogen peroxide is a clear liquid, slightly more viscous than water. In dilute solution, it appears colorless. With its oxidizing properties, hydrogen peroxide is often used as a bleach or cleaning agent...
with nitrite
Nitrite
The nitrite ion has the chemical formula NO2−. The anion is symmetric with equal N-O bond lengths and a O-N-O bond angle of ca. 120°. On protonation the unstable weak acid nitrous acid is produced. Nitrite can be oxidised or reduced, with product somewhat dependent on the oxidizing/reducing agent...
:

Peroxynitrite is an oxidant and nitrating agent. Because of its oxidizing properties, peroxynitrite can damage a wide array of molecules in cell
Cell (biology)
The cell is the basic structural and functional unit of all known living organisms. It is the smallest unit of life that is classified as a living thing, and is often called the building block of life. The Alberts text discusses how the "cellular building blocks" move to shape developing embryos....
s, including DNA
DNA
Deoxyribonucleic acid is a nucleic acid that contains the genetic instructions used in the development and functioning of all known living organisms . The DNA segments that carry this genetic information are called genes, but other DNA sequences have structural purposes, or are involved in...
and protein
Protein
Proteins are biochemical compounds consisting of one or more polypeptides typically folded into a globular or fibrous form, facilitating a biological function. A polypeptide is a single linear polymer chain of amino acids bonded together by peptide bonds between the carboxyl and amino groups of...
s. Formation of peroxynitrite in vivo has been ascribed to the reaction of the free radical superoxide
Superoxide
A superoxide, also known by the obsolete name hyperoxide, is a compound that possesses the superoxide anion with the chemical formula O2−. The systematic name of the anion is dioxide. It is important as the product of the one-electron reduction of dioxygen O2, which occurs widely in nature...
with the free radical nitric oxide
Nitric oxide
Nitric oxide, also known as nitrogen monoxide, is a diatomic molecule with chemical formula NO. It is a free radical and is an important intermediate in the chemical industry...
:

The resultant pairing of these two free radicals results in peroxynitrite, a molecule that is itself not a free radical, but that is a powerful oxidant.

In the laboratory, a solution of peroxynitrite can be prepared by treating acidified hydrogen peroxide with a solution of sodium nitrite, followed by rapid addition of NaOH. Its concentration is indicated by the absorbance at 302 nm (pH 12, ε302 = 1670 M−1 cm−1).

ONOO− reacts nucleophilically
Nucleophile
A nucleophile is a species that donates an electron-pair to an electrophile to form a chemical bond in a reaction. All molecules or ions with a free pair of electrons can act as nucleophiles. Because nucleophiles donate electrons, they are by definition Lewis bases.Nucleophilic describes the...
with carbon dioxide
Carbon dioxide
Carbon dioxide is a naturally occurring chemical compound composed of two oxygen atoms covalently bonded to a single carbon atom...
. In vivo, the concentration of carbon dioxide is about 1 mM, and its reaction with ONOO− occurs quickly. Thus, under physiological conditions, the reaction of ONOO− with carbon dioxide to form nitrosoperoxycarbonate (ONOOCO2−) is by far the predominant pathway for ONOO−. ONOOCO2− homolyzes to form carbonate radical and nitrogen dioxide, again as a pair of caged radicals. Approximately 66% of the time, these two radicals recombine to form carbon dioxide and nitrate. The other 33% of the time, these two radicals escape the solvent cage and become free radicals. It is these radicals (carbonate radical and nitrogen dioxide
Nitrogen dioxide
Nitrogen dioxide is the chemical compound with the formula it is one of several nitrogen oxides. is an intermediate in the industrial synthesis of nitric acid, millions of tons of which are produced each year. This reddish-brown toxic gas has a characteristic sharp, biting odor and is a prominent...
) that are believed to cause peroxynitrite-related cellular damage.
The source of this article is wikipedia, the free encyclopedia.  The text of this article is licensed under the GFDL.