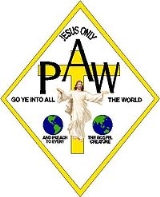 Overview
The Pentecostal Assemblies of the World (PAW) is a Pentecostal Christian
Christian
A Christian is a person who adheres to Christianity, an Abrahamic, monotheistic religion based on the life and teachings of Jesus of Nazareth as recorded in the Canonical gospels and the letters of the New Testament...
denomination. Founded in 1914, it is one of the oldest Oneness Pentecostal
Oneness Pentecostal
Oneness Pentecostalism refers to a grouping of denominations and believers within Pentecostal Christianity, all of whom subscribe to the nontrinitarian theological doctrine of Oneness...
organizations in existence. Headquarters are in Indianapolis, Indiana
Indianapolis, Indiana
Indianapolis is the capital of the U.S. state of Indiana, and the county seat of Marion County, Indiana. As of the 2010 United States Census, the city's population is 839,489. It is by far Indiana's largest city and, as of the 2010 U.S...
, and The Christian Outlook is the church's official publication. In 1998, it had a membership 1.5 million in the United States.
The Pentecostal Assemblies of the World is the result of the merger of two Oneness Pentecostal bodies in the early years of the Pentecostal movement.

This is a question for one of the pastors of your church. Can you explain the meaning and function of the sacraments of baptism and communion in thei...

What are the procedures for obtaining ministers licenses? Someone informed me that I would have to start of by taking a online correspondent course. ...

I would like to know about marriage between paw and those who are of pentacostal faith but not paw. Is the form of baptism according to Acts 2:38 the ...

I'm curious as to the teachings the PAW, Inc., as it relates to outward adorning and clothing of women. Please share the views, as they are today. I ...
More