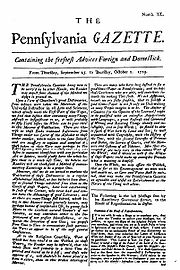 The Pennsylvania Gazette was one of the United States'
United States
The United States of America is a federal constitutional republic comprising fifty states and a federal district...
most prominent newspaper
Newspaper
A newspaper is a scheduled publication containing news of current events, informative articles, diverse features and advertising. It usually is printed on relatively inexpensive, low-grade paper such as newsprint. By 2007, there were 6580 daily newspapers in the world selling 395 million copies a...
s from 1728, before the time period of the American Revolution
American Revolution
The American Revolution was the political upheaval during the last half of the 18th century in which thirteen colonies in North America joined together to break free from the British Empire, combining to become the United States of America...
, until 1815. It was first published by Samuel Keimer and was the second newspaper to be published in Pennsylvania
Pennsylvania
The Commonwealth of Pennsylvania is a U.S. state that is located in the Northeastern and Mid-Atlantic regions of the United States. The state borders Delaware and Maryland to the south, West Virginia to the southwest, Ohio to the west, New York and Ontario, Canada, to the north, and New Jersey to...
under the name The Universal Instructor in all Arts and Sciences: and Pennsylvania Gazette, alluding to Keimer's intention to print out a page of Ephraim Chambers'
Ephraim Chambers
Ephraim Chambers was an English writer and encyclopaedist, who is primarily known for producing the Cyclopaedia, or a Universal Dictionary of Arts and Sciences.-Early life:...
Cyclopaedia, or Universal Dictionary of Arts and Sciences
Cyclopaedia, or Universal Dictionary of Arts and Sciences
Cyclopaedia: or, An Universal Dictionary of Arts and Sciences was an encyclopedia published by Ephraim Chambers in London in 1728, and reprinted in numerous editions in the eighteenth century...
in each copy. On October 2, 1729, Benjamin Franklin
Benjamin Franklin
Dr. Benjamin Franklin was one of the Founding Fathers of the United States. A noted polymath, Franklin was a leading author, printer, political theorist, politician, postmaster, scientist, musician, inventor, satirist, civic activist, statesman, and diplomat...
and Hugh Meredith bought the paper and shortened its name, as well as dropping Keimer's grandiose plan to print out the Cyclopaedia. Franklin not only printed the paper but also often contributed pieces to the paper under aliases
Pseudonym
A pseudonym is a name that a person assumes for a particular purpose and that differs from his or her original orthonym...
. His newspaper soon became the most successful in the colonies.

On August 6, 1741 Franklin published an editorial about the two days deceased Andrew Hamilton
Andrew Hamilton (lawyer)
Andrew Hamilton was a Scottish lawyer in Colonial America, best known for his legal victory on behalf of printer and newspaper publisher John Peter Zenger. This 1735 decision helped to establish that truth is a defense to an accusation of libel...
, a lawyer and public figure in Philadelphia who had been a friend. The editorial praised the man highly and showed Franklin had held the man in high esteem.

In 1752, Franklin published a third-person account of his pioneering kite experiment in the The Pennsylvania Gazette, without mentioning that he himself had performed it.

Primarily a publication for classified ads, merchants and individuals listed notices of employment, lost and found goods and items for sale. In the July 31st, 1776 edition the front page lists military actions announced by John Hancock alongside the sale of a plantation in Chester County, Pa., a three-dollar reward for a strayed horse, three pounds reward for the return of a 23-year-old Irish woman named Jane Stepberd, three pounds reward for runaway Negroe man Moses Graves and the sale of a unnamed "hearty Scotch Servant GIRL".

This newspaper, among other firsts, would print the first political cartoon
Editorial cartoon
An editorial cartoon, also known as a political cartoon, is an illustration containing a commentary that usually relates to current events or personalities....
in America, Join, or Die
Join, Or Die
Join or Die is a 2003 album by Amen. It was the first album published by the Refuse Music label and was limited to 2000 copies with the first 1000 copies hand numbered by Casey Chaos in his blood...
, authored by Franklin himself. It ceased publication in 1815, twenty-five years after Franklin's death. It is claimed that the publication later reemerged as the Saturday Evening Post in 1821.

Archives are available online for a fee.