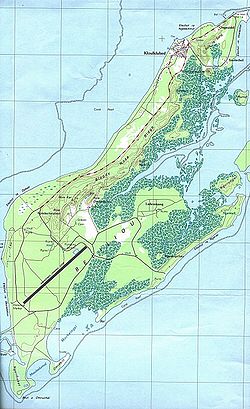 Peleliu is an island in the island nation of Palau
Palau
Palau , officially the Republic of Palau , is an island nation in the Pacific Ocean, east of the Philippines and south of Tokyo. In 1978, after three decades as being part of the United Nations trusteeship, Palau chose independence instead of becoming part of the Federated States of Micronesia, a...
. Peleliu forms, along with two small islands to its northeast, one of the sixteen states of Palau. It is located northeast of Angaur
Angaur
Angaur or Ngeaur is an island in the island nation of Palau. The island, which forms its own state, has an area of 8 km² . Its population is 188 . State capital is the village of Ngeremasch on the western side...
and southwest of Koror
Koror
Koror is the state comprising the main commercial centre of the Republic of Palau. It consists of several islands, the most prominent being Koror Island ....
.
Peleliu has a total area of 5 mi² (13 km²) , its population was about 700, making it the third most populous state of Palau. Most of the island's population lives in the village of Kloulklubed
Kloulklubed
Kloulklubed is the main settlement on the Palau island of Peleliu. it is situated at the northern end of the island, close to North beach. The village was a centre of Japanese operations during World War II, and the remains of the Japanese communications centre is still standing in the village...
which is the state capital on the northern coast. Including the capital, there are a total of four villages:

The battle for the island was particularly brutal because by this time the Japanese military had evolved island defense tactics to those of "endurance (fukakku) engagements." Avoiding decisive battles which characterized earlier island campaigns and often included the dramatic banzai attack, Japanese commanders instead deployed their soldiers to caves and other dug-in positions which had to be taken one by one -- maximizing casualties on the attacking force. Peleliu's terrain proved ideal for such tactics, with areas of rock and cave formations heavily favoring the defenders.

A U.S. Navy ship USS Peleliu
USS Peleliu (LHA-5)
USS Peleliu is a Tarawa-class amphibious assault ship of the United States Navy, named after the Battle of Peleliu during World War II. Entering service in 1980, the ship has been deployed to the Persian Gulf on several occasions, performed an evacuation of U.S...
(LHA-5) is named for the vicious battle fought on the island of Peleliu. Bob Hope
Bob Hope
Bob Hope, KBE, KCSG, KSS was a British-born American comedian and actor who appeared in vaudeville, on Broadway, and in radio, television and movies. He was also noted for his work with the US Armed Forces and his numerous USO shows entertaining American military personnel...
once said that the most emotional show he played in WWII was for the First Marine Division at Pavuvu
Pavuvu
Pavuvu is the largest of the Russell Islands in Central Province, Solomon Islands. It is located Northwest of Guadalcanal. The area is 120 km²....
. He agreed to do the show because the Marines were about to invade Peleliu. He recalls that sixty percent of the Marines were "Knocked off in that invasion of Peleliu" (Marine casualties were closer to forty percent.)