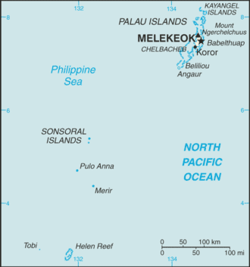 Angaur or Ngeaur is an island in the island nation of Palau
Palau
Palau , officially the Republic of Palau , is an island nation in the Pacific Ocean, east of the Philippines and south of Tokyo. In 1978, after three decades as being part of the United Nations trusteeship, Palau chose independence instead of becoming part of the Federated States of Micronesia, a...
. The island, which forms its own state, has an area of 8 km² (3 mi²). Its population is 188 (census
Census
A census is the procedure of systematically acquiring and recording information about the members of a given population. It is a regularly occurring and official count of a particular population. The term is used mostly in connection with national population and housing censuses; other common...
of 2002). State capital is the village of Ngeremasch
Ngeremasch
Ngeremasch is a village in Palau, and the capital of the state of Angaur. The population is 135. The town was formerly called Saipan Town....
on the western side. A second village, Rois, is immediately east of Ngeremasch.

Angaur is the site of a major World War II
World War II
World War II, or the Second World War , was a global conflict lasting from 1939 to 1945, involving most of the world's nations—including all of the great powers—eventually forming two opposing military alliances: the Allies and the Axis...
battle, and there are many American and Japanese battle relics scattered throughout the island. From to 1909 until 1954 phosphate
Phosphate
A phosphate, an inorganic chemical, is a salt of phosphoric acid. In organic chemistry, a phosphate, or organophosphate, is an ester of phosphoric acid. Organic phosphates are important in biochemistry and biogeochemistry or ecology. Inorganic phosphates are mined to obtain phosphorus for use in...
mining took place on Anguar, originally by Germans, then Japanese, and finally Americans. Angaur is the only place in Micronesia that has feral monkeys; they are descended from macaques released during German occupation. Thus it is also called Monkey Island.

Angaur Island is located southwest of Peleliu
Peleliu
Peleliu is an island in the island nation of Palau. Peleliu forms, along with two small islands to its northeast, one of the sixteen states of Palau. It is located northeast of Angaur and southwest of Koror....
, and it is a popular surfing location. Angaur is accessible by boats and small planes. From 1945 to 1978 the U.S. Coast Guard operated a LORAN
LORAN
LORAN is a terrestrial radio navigation system using low frequency radio transmitters in multiple deployment to determine the location and speed of the receiver....
transmitting station, LORSTA Palau, as part of the worldwide LORAN navigation system. The eastern side of the island is mostly sandy with rocky outcroppings, while the western side of the island has a small lagoon with a small fishing and transportation port. According to the CIA Factbook, the official languages here are Japanese
Japanese language
is a language spoken by over 130 million people in Japan and in Japanese emigrant communities. It is a member of the Japonic language family, which has a number of proposed relationships with other languages, none of which has gained wide acceptance among historical linguists .Japanese is an...
, English
English language
English is a West Germanic language that arose in the Anglo-Saxon kingdoms of England and spread into what was to become south-east Scotland under the influence of the Anglian medieval kingdom of Northumbria...
, and "Angaur". It is the only place outside of Japan
Japan
Japan is an island nation in East Asia. Located in the Pacific Ocean, it lies to the east of the Sea of Japan, China, North Korea, South Korea and Russia, stretching from the Sea of Okhotsk in the north to the East China Sea and Taiwan in the south...
where Japanese is an official language.
The source of this article is wikipedia, the free encyclopedia.  The text of this article is licensed under the GFDL.