Encyclopedia
The Peel P50 is a three-wheeled microcar
Microcar
A microcar is the smallest automobile classification usually applied to standard small car . Such small cars were generally referred to as cyclecars until the 1940s. More recent models are also called bubblecars due to their egg-shaped appearance.-Definition:The definition of a microcar has varied...
originally manufactured in 1962 and 1965) by the Peel Engineering Company
Peel Engineering Company
The Peel Engineering Company is a manufacturing company based on the Isle of Man that primarily made fibreglass boats as well as fairings for motorcycles. They were also responsible for the Peel Manxcar, Peel P50, and Peel Trident microcars, in addition to the Peel Viking Sport and prototype GRP...
on the Isle of Man
Isle of Man
The Isle of Man , otherwise known simply as Mann , is a self-governing British Crown Dependency, located in the Irish Sea between the islands of Great Britain and Ireland, within the British Isles. The head of state is Queen Elizabeth II, who holds the title of Lord of Mann. The Lord of Mann is...
. It retailed for £
Pound sterling
The pound sterling , commonly called the pound, is the official currency of the United Kingdom, its Crown Dependencies and the British Overseas Territories of South Georgia and the South Sandwich Islands, British Antarctic Territory and Tristan da Cunha. It is subdivided into 100 pence...
199 when new (1963 Model), and currently holds the record for the smallest automobile to go into production. It has no reverse gear thus proving difficult to maneuver in tight situations.

Designed as a city car
City car
A city car is a small car intended for use primarily in an urban area.City cars are sold worldwide and most automotive industry manufacturers have one or two in their line-up. In North-America city cars are often referred to simply as "subcompacts" alongside the superminis. These kind of cars...
, it was advertised as capable of seating "one adult and a shopping bag." The vehicle's only door was on its left side, and equipment included a single windscreen wiper and only one headlight. Standard colors were Daytona White, Dragon Red and Dark Blue.

In 2010 production of a replica version was started by a newly formed company, called Peel Engineering Ltd based in England (not to be confused with the original Peel Engineering Company from the Isle of Man). Externally this car was very similar to the original but with many major mechanical differences in the suspension, steering and drivetrain. Driven by an electric motor and with a top speed of 16 km/h (10 mph), this version was produced as a display vehicle and was not road legal. In 2011 production commenced on a new road legal petrol version. Most colors from the original are used in the 2010 models with only Dark Blue being replaced by Capri Blue.

Production is located in an undisclosed location in northern England.

The P50 used a 49 cc DKW
DKW
DKW is a historic German car and motorcycle marque. The name derives from Dampf-Kraft-Wagen .In 1916, the Danish engineer Jørgen Skafte Rasmussen founded a factory in Zschopau, Saxony, Germany, to produce steam fittings. In the same year, he attempted to produce a steam-driven car, called the DKW...
engine which gave it a top speed of approximately 61 kilometres per hour (37.9 mph), and was equipped with a three-speed manual transmission
Manual transmission
A manual transmission, also known as a manual gearbox or standard transmission is a type of transmission used in motor vehicle applications...
that had no reverse gear. Consequently, turning in a confined area could only be achieved by pushing, or lifting the car using the handle on the rear and physically pulling it round. The makers and users claim fuel consumption of 100 mpgimp.

At least one prototype, the Peel P55 Saloon Scooter, has also survived. Unlike the production Peel P50 (along with all developments and replicas thereof), this prototype used the less stable layout of a single wheel at the front and two at the back.
Approximately 50 Peel P50s were sold at £199 each. 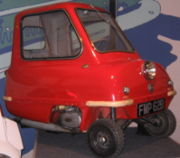 The Peel P50 was and is road-legal in the UK, being in the "three-wheeler" category, less than 8 long cwt (406.4 kg). Cars were exported to other countries, sometimes being classified as a moped, e.g. the P50 that went to Finland.


Appearances in the media

On 28 October 2007, the P50 was featured in a segment of the BBC
BBC
The British Broadcasting Corporation is a British public service broadcaster. Its headquarters is at Broadcasting House in the City of Westminster, London. It is the largest broadcaster in the world, with about 23,000 staff...
motoring programme Top Gear
Top Gear (current format)
Top Gear is a British television series about motor vehicles, primarily cars. It began in 1977 as a conventional motoring magazine show. Over time, and especially since a relaunch in 2002, it has developed a quirky, humorous style...
on BBC Two
BBC Two
BBC Two is the second television channel operated by the British Broadcasting Corporation in the United Kingdom. It covers a wide range of subject matter, but tending towards more 'highbrow' programmes than the more mainstream and popular BBC One. Like the BBC's other domestic TV and radio...
, during which the presenter, Jeremy Clarkson
Jeremy Clarkson
Jeremy Charles Robert Clarkson is an English broadcaster, journalist and writer who specialises in motoring. He is best known for his role on the BBC TV show Top Gear along with co-presenters Richard Hammond and James May...
, entered the car and drove through central London
London
London is the capital city of :England and the :United Kingdom, the largest metropolitan area in the United Kingdom, and the largest urban zone in the European Union by most measures. Located on the River Thames, London has been a major settlement for two millennia, its history going back to its...
to work. Clarkson, who is 6 ft 5 in (196 cm) tall, demonstrated that it was possible, although difficult, for tall people to get into the P50. Upon arriving at the BBC, he drove past the car parks, between bollards, to the front of the building, after which he pulled the P50 behind him to his office. He then drove the P50 through the corridors of the office building, which included the background of BBC News 24
BBC News 24
BBC News is the BBC's 24-hour rolling news television network in the United Kingdom. The channel launched as BBC News 24 on 9 November 1997 at 17:30 as part of the BBC's foray into digital domestic television channels, becoming the first competitor to Sky News, which had been running since 1989...
while it was on air and used a standard passenger lift (elevator) to get to a meeting, which he attended inside the P50. At the end of the meeting Clarkson drove out of the building and stated that, if the car had a reverse gear, it would be the "ultimate in personal mobility".