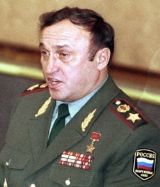 Encyclopedia
Pavel Sergeyevich Grachev (b. January 1, 1948, Tula Oblast
Tula Oblast
Tula Oblast is a federal subject of Russia with its present borders formed on September 26, 1937. Its administrative center is the city of Tula. The oblast has an area of and a population of 1,553,874...
), sometimes transliterated as Grachov, is a retired Russia
Russia
Russia or , officially known as both Russia and the Russian Federation , is a country in northern Eurasia. It is a federal semi-presidential republic, comprising 83 federal subjects...
n Army General and the former Defence Minister of the Russian Federation; in 1988 he was declared the Hero of the Soviet Union
Hero of the Soviet Union
The title Hero of the Soviet Union was the highest distinction in the Soviet Union, awarded personally or collectively for heroic feats in service to the Soviet state and society.-Overview:...
. At the post of Defence Minister (from 1992 to 1996), Grachev gained notoriety because of his military incompetence
Military incompetence
Military incompetence refers to incompetencies and failures of military organisations, whether through incompetent individuals or through a flawed institutional culture....
displayed during the war in Chechnya
Chechnya
The Chechen Republic , commonly referred to as Chechnya , also spelled Chechnia or Chechenia, sometimes referred to as Ichkeria , is a federal subject of Russia . It is located in the southeastern part of Europe in the Northern Caucasus mountains. The capital of the republic is the city of Grozny...
and the persistent allegations of involvement in enormous corruption
Political corruption
Political corruption is the use of legislated powers by government officials for illegitimate private gain. Misuse of government power for other purposes, such as repression of political opponents and general police brutality, is not considered political corruption. Neither are illegal acts by...
scandals.

Pavel Grachev, born in 1948 in the Tula Oblast region of RSFSR
Russian Soviet Federative Socialist Republic
The Russian Soviet Federative Socialist Republic , commonly referred to as Soviet Russia, Bolshevik Russia, or simply Russia, was the largest, most populous and economically developed republic in the former Soviet Union....
, joined the Soviet Army
Soviet Army
The Soviet Army is the name given to the main part of the Armed Forces of the Soviet Union between 1946 and 1992. Previously, it had been known as the Red Army. Informally, Армия referred to all the MOD armed forces, except, in some cases, the Soviet Navy.This article covers the Soviet Ground...
's airborne troops in 1965 and finished the Ryazan Airborne Military Command School. After commanding parachute
Parachute
A parachute is a device used to slow the motion of an object through an atmosphere by creating drag, or in the case of ram-air parachutes, aerodynamic lift. Parachutes are usually made out of light, strong cloth, originally silk, now most commonly nylon...
platoons, companies and battalions in the 1970s, he attended the Frunze Military Academy and the General Staff Academy
General Staff Academy (Russia)
The General Staff Academy of the Armed Forces of the Russian Federation was founded in 1936 in Moscow by Leonid Govorov. It was the senior Soviet and now Russian professional school for officers....
, graduating in 1981. During the Soviet war in Afghanistan
Soviet war in Afghanistan
The Soviet war in Afghanistan was a nine-year conflict involving the Soviet Union, supporting the Marxist-Leninist government of the Democratic Republic of Afghanistan against the Afghan Mujahideen and foreign "Arab–Afghan" volunteers...
, Grachev commanded a parachute-landing regiment
Regiment
A regiment is a major tactical military unit, composed of variable numbers of batteries, squadrons or battalions, commanded by a colonel or lieutenant colonel...
from 1981 to 1983, and was in command of the 103rd Guards Airborne Division in Afghanistan in the last years of the Soviet involvement.

In December 1990, he was appointed commander of the Soviet airborne troops. In August/December 1991, Grachev became the First Deputy Minister of Defence
Defence minister
A defence minister is a person in a cabinet position in charge of a Ministry of Defence, which regulates the armed forces in some sovereign nations...
of the Soviet Union during the break-up of USSR.

For a period of time, in the early-to-mid-1990s, Grachev was a close friend of President of Russia Boris Yeltsin
Boris Yeltsin
Boris Nikolayevich Yeltsin was the first President of the Russian Federation, serving from 1991 to 1999.Originally a supporter of Mikhail Gorbachev, Yeltsin emerged under the perestroika reforms as one of Gorbachev's most powerful political opponents. On 29 May 1990 he was elected the chairman of...
, and held the post of the Minister of Defence of the Russian Federation from May 1992 to June 1996. Grachev took part in the Soviet coup attempt of 1991
Soviet coup attempt of 1991
The 1991 Soviet coup d'état attempt , also known as the August Putsch or August Coup , was an attempt by a group of members of the Soviet Union's government to take control of the country from Soviet president Mikhail Gorbachev...
and the events of the Russian constitutional crisis of 1993
Russian constitutional crisis of 1993
The constitutional crisis of 1993 was a political stand-off between the Russian president and the Russian parliament that was resolved by using military force. The relations between the president and the parliament had been deteriorating for a while...
, during which he supported Yeltsin. In November 1994 Yeltsin called Grachev "the best defense minister of the decade."

In the late 1994 to 1996, Grachev played a key role in initiating and leading the First Chechen War
First Chechen War
The First Chechen War, also known as the War in Chechnya, was a conflict between the Russian Federation and the Chechen Republic of Ichkeria, fought from December 1994 to August 1996...
. He was one of authors of the idea to use force to "restore constititional order" in the breakaway republic of Chechnya
Chechnya
The Chechen Republic , commonly referred to as Chechnya , also spelled Chechnia or Chechenia, sometimes referred to as Ichkeria , is a federal subject of Russia . It is located in the southeastern part of Europe in the Northern Caucasus mountains. The capital of the republic is the city of Grozny...
and publicily promised to swiftly crush the Chechen separatist forces "in a couple of hours with a single airborne regiment." He was rumoured to launch the disastrous storming of Grozny while drunk during the celebrations of his January 1 birthday. As TIME commented in 1995: "Grachev had remarked recently that only an 'incompetent commander' would order tanks into the streets of central Grozny
Grozny
Grozny is the capital city of the Chechen Republic, Russia. The city lies on the Sunzha River. According to the preliminary results of the 2010 Census, the city had a population of 271,596; up from 210,720 recorded in the 2002 Census. but still only about two-thirds of 399,688 recorded in the 1989...
, where they would be vulnerable (...) Yet at the end of December he did it." Eventually, in July 1996, Yeltsin sacked the disgraced Grachev following his 1996 re-election
Russian presidential election, 1996
Presidential elections were held in Russia in 1996. Incumbent Russian President Boris Yeltsin was seeking a four-year term after officially winning the 1991 presidential election. The first round was held on 16 June 1996...
. The war soon ended in a Russian defeat, with hundreds of thousands of military and civilian casualties.

In December 1997, Grachev was appointed a senior military adviser to Rosvooruzhenie State Corporation, the Russian arms export monopoly
Monopoly
A monopoly exists when a specific person or enterprise is the only supplier of a particular commodity...
. On April 25, 2007, Grachev was fired from this position.

Grachev was accused of being personally involved in major military corruption
Political corruption
Political corruption is the use of legislated powers by government officials for illegitimate private gain. Misuse of government power for other purposes, such as repression of political opponents and general police brutality, is not considered political corruption. Neither are illegal acts by...
scandals, which was not proven in court, that occurred during the withdrawal of the Soviet troops from East Germany. The alleged corruption, which gained Grachev the nickname of "Pasha Mercedes", was the focus of a series of articles published by the investigative journalist Dmitry Kholodov
Dmitry Kholodov
Dmitry Yuryevich Kholodov was educated as a physicist and began his working life, alongside his parents, at the defence industry institute in Klimovsk in the Moscow Region. Faced by limited career prospects he turned to journalism, first working for the local radio. In 1992 he became a reporter...
, killed by a booby-trapped suitcase in 1994. Four of Grachev's airborne officers and two others were tried in the murder of Kholodov but were later acquitted.

The archival footage of Grachev saying "tank regiments are commanded by total idiots; you send in the infantry first, then the tanks" is shown on TV in the 2002 film House of Fools.