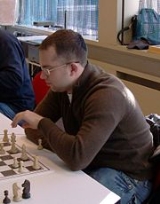 Encyclopedia
Pavel Eljanov is a Ukrainian
Ukraine
Ukraine is a country in Eastern Europe. It has an area of 603,628 km², making it the second largest contiguous country on the European continent, after Russia...
chess
Chess
Chess is a two-player board game played on a chessboard, a square-checkered board with 64 squares arranged in an eight-by-eight grid. It is one of the world's most popular games, played by millions of people worldwide at home, in clubs, online, by correspondence, and in tournaments.Each player...
grandmaster
International Grandmaster
The title Grandmaster is awarded to strong chess players by the world chess organization FIDE. Apart from World Champion, Grandmaster is the highest title a chess player can attain....
.

In 1999, he was a member of the Ukrainian national youth team, which won the U-16 Chess Olympiad
Chess Olympiad
The Chess Olympiad is a biennial chess tournament in which teams from all over the world compete against each other. The event is organised by FIDE, which selects the host nation.-Birth of the Olympiad:The first Olympiad was unofficial...
in Artek
Artek (camp)
Artek is a Young Pioneer camp near Gurzuf, Ukraine. It was established on June 16 1925 on the Black Sea in the town of Gurzuf located on the Crimean peninsula, near Medved Mountain, Ukraine. The camp first hosted only 80 children but then grew rapidly. In 1969 it had an area of 3.2 km²...
, Ukraine.
Eljanov won the Corus
Corus chess tournament
The Tata Steel Chess Tournament formerly called the Corus chess tournament takes place every year, usually in January, in a small town called Wijk aan Zee, part of the larger Beverwijk in the province of North Holland in the Netherlands...
B 2007 in Wijk aan Zee
Wijk aan Zee
Wijk aan Zee is a small town on the coast of the North Sea in the municipality of Beverwijk in the province of North Holland of the Netherlands. The prestigious Tata Steel chess tournament formerly Corus chess tournament and before that called Hoogovens tournament takes place there every year.Due...
, Holland with a score of 9/13. This result enabled him to qualify for the category 20 tournament Corus A 2008.