Encyclopedia
Paulus Hector Mair was an Augsburg
Augsburg
Augsburg is a city in the south-west of Bavaria, Germany. It is a university town and home of the Regierungsbezirk Schwaben and the Bezirk Schwaben. Augsburg is an urban district and home to the institutions of the Landkreis Augsburg. It is, as of 2008, the third-largest city in Bavaria with a...
civil servant, and active in the martial arts of his time
Historical European martial arts
Historical European martial arts is a neologism describing martial arts of European origin, used particularly to refer to arts formerly practised, but having since died out or evolved into very different forms...
. He collected Fechtbücher
Fechtbuch
Martial arts manuals are instructions, with or without illustrations, detailing specific techniques of martial arts.Prose descriptions of martial arts techniques appear late within the history of literature, due to the inherent difficulties of describing a technique rather than just demonstrating...
and undertook to compile all knowledge of the art of fencing in a compendium surpassing all earlier books. For this, he engaged the painter Jörg Breu the Younger
Jörg Breu the Younger
Jörg Breu the Younger , son of Jörg Breu the Elder, was a painter of Augsburg.In the 1540s, he was involved with the creation of the Fechtbucher commissioned by Paulus Hector Mair....
, as well as two experienced fencers, whom he charged with perfecting the techniques before they were painted. The project was very costly, taking full four years, and according to Mair, consumed most of his family's income and property. Three versions of his compilation, and one later, less extensive manuscript, have been preserved.

Not only did Mair spend huge sums on his collections and on his projects, he also had a very expensive lifestyle, frequently hosting receptions for the more important burghers of Augsburg. His own income was not sufficient for this, and during many years, he misappropriated funds from the city treasury, with the supervision of which he had been entrusted since 1541. His embezzlement
Embezzlement
Embezzlement is the act of dishonestly appropriating or secreting assets by one or more individuals to whom such assets have been entrusted....
s were discovered in 1579, and Mair was hanged as a thief at the age of 62. 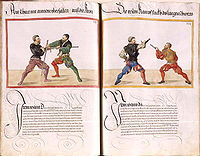