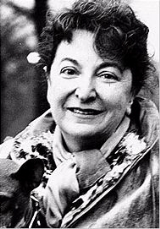 Overview
Pauline Kael was an American film critic who wrote for The New Yorker
The New Yorker
The New Yorker is an American magazine of reportage, commentary, criticism, essays, fiction, satire, cartoons and poetry published by Condé Nast...
magazine from 1968 to 1991. Earlier in her career, her work appeared in City Lights
City Lights
City Lights is a 1931 American silent film and romantic comedy-drama written by, directed by, and starring Charlie Chaplin. It also has the leads Virginia Cherrill and Harry Myers. Although "talking" pictures were on the rise since 1928, City Lights was immediately popular. Today, it is thought of...
, McCall's
McCall's
McCall's was a monthly American women's magazine that enjoyed great popularity through much of the 20th century, peaking at a readership of 8.4 million in the early 1960s. It was established as a small-format magazine called The Queen in 1873...
and The New Republic
The New Republic
The magazine has also published two articles concerning income inequality, largely criticizing conservative economists for their attempts to deny the existence or negative effect increasing income inequality is having on the United States...
.

Kael was known for her "witty, biting, highly opinionated, and sharply focused" reviews, her opinions often contrary to those of her contemporaries. She is often regarded as the most influential American film critic of her day.

She left a lasting impression on many major critics, including Armond White
Armond White
Armond White is a New York-based film and music critic known for his provocative and idiosyncratic film criticism, which some have characterized as contrarian. He is currently the editor of City Arts, for which he also writes articles and reviews...
, whose reviews are similarly non-conformist, and Roger Ebert
Roger Ebert
Roger Joseph Ebert is an American film critic and screenwriter. He is the first film critic to win a Pulitzer Prize for Criticism.Ebert is known for his film review column and for the television programs Sneak Previews, At the Movies with Gene Siskel and Roger Ebert, and Siskel and Ebert and The...
, who has said that Kael "had a more positive influence on the climate for film in America than any other single person over the last three decades." Owen Gleiberman
Owen Gleiberman
Owen Gleiberman is an American film critic for Entertainment Weekly, a position he has held since the magazine's launch in 1990. From 1981–89, he worked at the Boston Phoenix....
said she "was more than a great critic.

In the arts, the critic is the only independent source of information. The rest is advertising.

I loved writing about things when I was excited about them. It's not fun writing about bad movies. I used to think it was bad for my skin. It's painful writing about the bad things in an art form, particularly when young kids are going to be enthusiastic about those things, because they haven't seen anything better, or anything different.

The words "Kiss Kiss Bang Bang," which I saw on an Italian movie poster, are perhaps the briefest statement imaginable of the basic appeal of movies. This appeal is what attracts us, and ultimately what makes us despair when we begin to understand how seldom movies are more than this.

"A Note on the Title"

Alienation is the most common state of the knowledgeable movie audience, and though it has the peculiar rewards of low connoisseurship, a miser’s delight in small favors, we long to be surprised out of it — not to suspension of disbelief nor to a Bertolt Brecht|Brechtian kind of alienation, but to pleasure, something a man can call good without self-disgust.